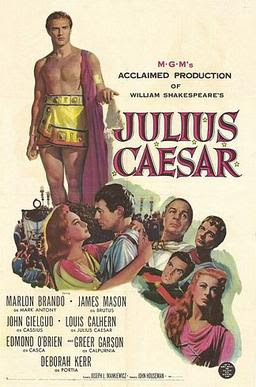 So this William Shakespeare guy....pretty talented, huh? A poet and playwright, he is basically the benchmark for everything in literature. And thanks to my upbringing in English classes through high school and college, I basically hate Shakespeare. I was forced to read his writings and resented basically every minute of it. That only partially explains my hate for 1953's Julius Caesar, but it is certainly part of it.

In ancient Rome, senator Julius Caesar (Louis Calhern) returns to an adoring public, many touting him as the future ruler of the Roman empire. Caesar's ambition is feared throughout the Senate, even leading many of his fellow Senators to plot against him, including the idealistic Brutus (James Mason) and cynical, scorned Cassius (John Gielgud). They worry that his ambition, along with close friend and fellow Senator, Mark Antony (Marlon Brando), will spell Rome's doom. They begin to form a plan, one that could change the country's future for years to come.

Now I'm going to say something early and just be done with it. I don't intend this review to sound like a whiny high school student although no doubt it will to a certain point. I can appreciate Shakespeare as an immense talent, but that doesn't mean I like anything about reading his work. I can appreciate that his talents have influenced basically every form of literature written since. But actually reading it? Some of the most difficult experiences I've ever had with the written word. Long, uninterrupted scenes of dialogue/monologues have a knack for putting me to sleep quickly. But....but.....even knowing this, I sought out this 1953 film, mostly because of the extraordinary talent assembled here. Unfortunately, I disliked it as much as I've always disliked Shakespeare's works whether it be in books and plays or film and television.

Where my objection comes from is Shakespeare's style. In writing, it is extremely difficult for me to get through the dialogue, and seeing it in a film didn't help. Well written it most certainly is, but it is stilted, awkward, forced and for me, difficult to follow. It doesn't seem to make a difference who's reciting the lines because the talent in this cast is truly impressive. And yes, I know these are stage-based stories, but seeing actors -- no matter the talent -- stand and wave and yell and recite several minutes of expressive yet still stilted dialogue doesn't scream out 'ENTERTAINING!' to me. Acting is one thing, and method acting a whole other beast, but I've never understood the appeal of loud, verbose, exaggerated stage acting, and that's what this movie is. It's 120 minutes of very talented actors talking and talking and...well, you get the idea.

With so much talent assembled for this film in the cast and director Joseph Mankiewicz behind the camera, I just assumed my issues would go by the wayside. With three movies to his name (Streetcar, The Men, Viva Zapata), Brando is a bright spot as Mark Anthony. His famous address of the Roman people following Caesar's assassination especially stands out. Then throw in Mason, Calhern, Gielgud, Edmond O'Brien, Greer Garson and Deborah Kerr? How could that not be worthwhile? I chalk it up more to Shakespeare's style than anything, but I just didn't care. I know the story, know where it will end up, and who makes it and who doesn't. Also look for Michael Ansara, Michael Pate, John Doucette, Lawrence Dobkin and Rhys Williams in smaller supporting parts.

I'm ready to take all sorts of heat for my dislike of this movie, but I hated it almost from the start. Besides the stilted, overdone stage acting, it is an incredibly dull story to watch. It was filmed in black and white on a soundstage, the camera and focus on the actors, not the huge scale or lavish sets. Bored to tears. There's just only so many ways to hear a classically trained actor speaking in the most prim and proper English ever written. So go ahead, let me have it if you so choose. I'm admitting I don't like Shakespeare. Karma is going to kick me square in the butt at some point.