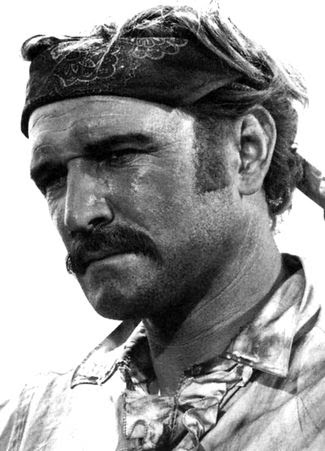 A supporting actor and background player, Richard Harris didn't take long to shoot to fame as a leading man, starting with 1963's This Sporting Life. He was part of a wave of actors in British cinema in the 1960s who helped change -- if not revolutionize -- acting. Almost a method actor but not quite, he was intense with the best of them and capable of doing countless parts. He was reintroduced to a new generation with his part in the Harry Potter series. One of my favorites. Click on the movie titles for the link to the full reviews.

Major Dundee (1965): Without question, this is the film that made me a Richard Harris fan. His Capt. Ben Tyreen is one of my all-time favorite characters, a Confederate renegade riding with Charlton Heston's Maj. Dundee, a Union officer at the head of a ragtag group of cavalry, Confederate prisoners, black soldiers, drifters and gunmen trailing an Apache war party in 1860s Mexico. Almost a dry run for director Sam Peckinpah who reused themes, scenes and ideas four years later in his classic The Wild Bunch. Great movie.

The Wild Geese (1978): A hidden gem I stumbled across a few years back, the ultimate men on a mission movie. Harris, Richard Burton, Roger Moore and Hardy Kruger are past their prime commandos putting together a team of mercenaries to rescue a kidnapped African president. This is what they mean when 'Guy's movie' comes up. Action galore, surprisingly moving ending. Cool actors being cool is all you need to remember.

Juggernaut (1974): One of many disaster movies released in the 1960s and 1970s, but it's different...it's good. Not as melodramatic or overdone, it's the story of a terrorist placing seven barrel-sized bombs on an ocean liner heading from England to New York. Harris and David Hemmings are the bomb disposal team leaders, perilously helicoptered in on choppy water. Also look for Anthony Hopkins, Ian Holm, Omar Sharif and Clifton James.

The Heroes of Telemark (1965): After bursting onto the scene with This Sporting Life, this based on the truth commando story was one of Harris' first follow-ups. He plays a Norwegian resistance leader teaming with scientist Kirk Douglas to handicap the Germans' efforts in WWII to create an atomic bomb. Not a classic, but a lot of fun with several memorable sequences, especially the stick to the truth finale.

Harry Potter and the Sorcerer's Stone (2001): Who is  Richard Harris? Now millions of young readers and viewers knew as Harris plays Dumbledore, one of Harry Potter's teachers at Hogwarts. A great introduction to the series with Maggie Smith, John Cleese, John Hurt and Alan Rickman aiding the cause.

The Wreck of the Mary Deare (1959): A supporting, pre-star role for Harris, playing a key supporting part to stars Gary Cooper and Charlton Heston (reuniting six years later for Major Dundee). The high seas adventure is missing something, a story told in flashback that is never as interesting as it should have been. Worth a watch once for nothing else than the casting.

Shake Hands with the Devil (1959): Irish actor Harris plays a.....Irish revolutionary, a member of the IRA. An American (Don Murray) ends up fighting with the IRA (including leader James Cagney) with Harris as one of Cagney's men. Appropriately dark, it isn't a one-sided story painting anyone as faultless or overly heroic, just a good story.

Patriot Games (1992): Harrison Ford's first of two ventures at playing Tom Clancy's Jack Ryan, a CIA analyst caught up in something with the IRA far removed from his office. Harris has a solid if underused part as an IRA spokesman trying to smooth the situation as best as possible.


The Guns of Navarone (1962): One of the best action/adventure movies ever, it helped set the stage for the direction a whole genre would take in the years following. Harris has a memorable one-scene cameo early in the movie, Gregory Peck, Anthony Quinn, David Niven and an all-around great cast taking it from there in the story of a small group of commandos on a suicide mission in WWII in the Mediterranean.

Any requests? I'd like to rewatch Gladiator soon, not to mention the newer Count of Monte Cristo, Mutiny on the Bounty, The Molly Maguires and others.