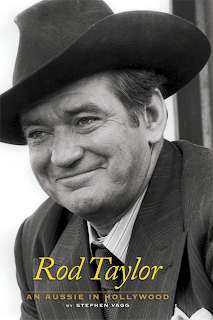 An Australian actor with over 50 credits to his name, Rod Taylor is one of my all-time favorites. Through the 1960s and 1970s, he was an underrated action star, capable of playing the lead while also playing the likable sidekick as needed. He never had that one classic part, but his career on the whole is still very impressive. Click on the movie titles for full reviews.

Dark of the Sun (1968): One of my all-time favorite action movies with Taylor and Jim Brown starring as mercenaries working in Africa to save a shipment of diamonds and a town full of people about to be massacred. The variety of action is impressive -- shootouts, chases, hand-to-hand combat, a chainsaw fight -- and the pacing never slows down. An action movie fan's dream.

The Liquidator (1965): In the age of James Bond movies and all the spoofs that came from 007's success comes this funny, sexy, action-packed spy story that falls somewhere in between. Taylor plays a WWII vet recruited to be an assassin -- a liquidator -- but realizes he can't morally do it so....he hires someone else to do his hits. Also look for Trevor Howard as Taylor's "handler" of sorts.

36 Hours (1965): One of the most original WWII stories/movies I've ever seen. German Intelligence is trying to figure out where the D-Day Invasion will come, and go to such lengths that they kidnap an American agent (James Garner) and convince him it's 1948 when in reality it's early June 1944. Taylor plays the head German agent trying to lead the ultra-complex dupe with Eve Marie Saint playing a key supporting role.

Sunday in New York (1963): A romantic comedy that is....gasp...GOOD! Taylor, Jane Fonda, Cliff Robertson and Robert Culp co-star in a charming rom-com that is goofy, funny and sweet with one misunderstanding after another dotting the story. Just a genuinely good movie with a lot of laughs and a lot of talent in that cast.

Raintree County (1957): Basically Gone With the Wind 2, an immense, beautifully shot film with a ridiculously deep cast. Montgomery Clift stars as a young Indiana man affected by the growing conflict that will ultimately lead to the Civil War. Taylor, Elizabeth Taylor, Eve Marie Saint, Lee Marvin and Nigel Patrick stand out in the casting department.

Inglourious Basterds (2009): In Quentin Tarantino's WWII epic, Taylor has a 'blink and you'll miss it' appearance as British prime minister Winston Churchill. Brad Pitt, Diane Kruger and Michael Fassbender star in a schizo WWII story that is highly enjoyable if not the action-packed movie it was made out to be.

Young Cassidy (1965): The Aussie plays an Irishman, this time playing famous Irish writer Sean O'Casey. It is a part that allows him to flex some of his dramatic ability and not just be a tough guy, action lead kind of movie star. Maggie Smith, Flora Robson, Michael Redgrave and Julie Christie round out the cast.

The Train Robbers (1973): A late John Wayne western with Taylor and Ben Johnson playing sidekick roles to the Duke. Short if highly entertaining western, the above-mentioned trio joining Ann-Margret in a ride down into Mexico for a cache of hidden gold. The only problem? Some 40 gunmen aren't far behind, and they want the gold just as badly. Well-written, easy-going and likable western aided by its strong cast.

Fate is the Hunter (1964): Taylor has what amounts to a cameo with an early introduction and flashback scenes in this early disaster movie. Glenn Ford co-stars as an investigator trying to figure out who is at fault for a horrific plane crash. Lots of early momentum is undone late by a story that takes some unnecessary twists and turns.

The High Commissioner (1968): Basically think of Coogan's Bluff but with Taylor instead of Clint Eastwood. An out-of-his element Australian police officer is forced to go to England to apprehend a murder suspect from a case that's almost 15 years old. Christopher Plummer co-stars in this quasi-thriller that doesn't do much new but manages to be entertaining just the same.

Chuka (1967): An odd American western that is clearly feeling the influence of the spaghetti/Euro westerns. Made mostly on an indoor set, it's the story of an Army scout (Taylor) trying to prevent a massacre at a far-off cavalry post. Very dark, surprisingly violent, and an underrated gem. John Mills, Ernest Borgnine, Luciana Paluzzi and James Whitmore co-star.