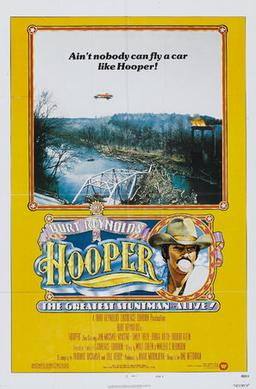 Names like Yakima Canutt, Bud Ekins, Dar Robinson, Chuck Roberson, and Chuck Hayward may not ring a bell as an instantly recognizable Hollywood icons. They should though. These are just some of the thankless stars of the stunt business, doing the crazy stunts the actors/actresses just couldn't. Right up there with that crew (and countless others we could mention) was stuntman-actor-director Hal Needham. Who better to direct the story of an aging stuntman trying to hold on for a little more glory? N-O ONE. Here's 1978's Hooper.

For years now, Sonny Hooper (Burt Reynolds) has been the BEST stuntman working in Hollywood. Versatile in all his stunts, from car chases to aerial acrobatics, chases on horseback to a brutal fistfight, there's nothing Sonny can't do and there is no stunt he'll turn down. He'll try anything. That reckless attitude toward his work is catching up with him. He's now in his 40's and has a laundry list of broken bones and horrifically painful injuries to show for his well-earned reputation. Well, now that reputation is on the line a little bit. Though everyone still respects Sonny and looks to him to pull off the craziest of the crazy, there's a new kid on the lots, Ski (Jan-Michael Vincent), who's showing a similar knack for pulling off the impossible. How far will Sonny go to keep his unofficial title as 'Best Stuntman Around'? Maybe the most dangerous stunt of his career will do it...

Movies and stories about the making of said movies can be funny, dramatic, condescending, pretentious, revealing, and sometimes all of the above. A movie about stunt men being crazy and goofy and generally acting like idiots? Say what you want about Needham's 'Hooper,' but it is fun. It is dumb, slightly disjointed and drifts too much, but from beginning to end, it is F-un. At 100 minutes, it doesn't overstay its welcome and in the second half does feature some darker (potentially at least) moments. That said, it's a Burt Reynolds movie. Things aren't going to get too dark here. Sit back with a beer and enjoy this one.

Through the general goofiness, the most pleasant part of the story is seeing that behind-the-scenes world of the stunt men. They walk onto the set, do their stunt and...yeah, they're done for the day. Now yeah, those stunts are horrifically dangerous but you get the idea. They're celebrities among the cast and crew, albeit anonymously to the viewing public. Coming from Needham and Reynolds (who got his start as a stuntman), you know the respect will be there with the profession, along with the helter-skelter mindset of these nutcases who willingly put themselves in peril day-in and day-out. The conversation doesn't seem scripted, just guys being guys busting each other left and right. So as mentioned, the story isn't necessarily the most pointed thing around, just a series of connecting scenes linking it all together. Fun though. Definitely fun.

Who better to help us jump into the world of the stuntman headfirst than Burt Reynolds? Nobody! One of the biggest stars of the 1970's, this isn't a heavy acting part -- most of his best parts seem to be variations on his own personality -- but it is nonetheless a strong performance. You get a feel for Reynolds' Sonny, past his prime but still kicking strong. He's seen and done it all in a career that's not young anymore. Now, he has to decide how far he wants to push it. At the height of his star power, Reynolds is excellent. Playing off that familiar new fast gun in the area, Vincent is a good match for Reynolds. It's a rivalry between the dueling stuntmen, but there seems to be a genuine friendship and respect between the two men. Like I said, it never gets too dramatic along the way. The tone and spirit is generally pretty lighthearted.

The cast overall here is pretty impressive, especially if you're a fan of countless guy's guys movies from the 1960's and 1970's. Also keep an eye out for Sally Field (the girlfriend), Brian Keith (the former best stuntman around/potential father-in-law), James Best (Sonny's friend/manager), John Marley (the film's producer), Robert Klein (the ego-maniacal director), Adam West (the star), and even NFL QB Terry Bradshaw has a fun appearance. Also look for Jim Burk as a stuntman and friend of Sonny's. Burk was a frequent performer in John Wayne's later movies and finally gets a part that lets him say a few words.

The best thing going here is the actual stunts. Stands to reasons we're here for a stuntman movie so might as well see some ridiculously cool stunts, right? Reynolds does a lot of his own work, but 'Hooper' runs the gamut in terms of the variety of what we get to see. A whole bunch of craziness -- the movie they're working on seems like a James Bond knock-off -- and all of it leading to a ridiculously choreographed sequence that Klein's director wants shot in one take. ONE TAKE! It's lunacy but just go along with it. The capper? The longest car jump ever as Sonny and Ski are supposed to drive a rocket car over a river where a bridge has recently been demolished. Yeah, crazy, kooky stuff. Make sure to stick around for the end though with Reynolds pulling his usual shtick and breaking the fourth wall.

A fun movie. A dumb movie but fun!