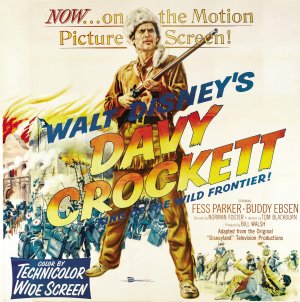 The name David Crockett is pretty instantly recognizable. One of the biggest heroes in American history, he accomplished a ton in his 50 years on Earth, a hunter, politician and through his actions at the Alamo, a tragic, mysterious icon. But the thing that people most often associate with Crockett is actually the Disney treatment, 1955's Davy Crockett: King of the Wild Frontier.

It's the mid 1810's and Tennessee hunter and farmer Davy Crockett (Fess Parker) has joined the local militia to help General Andrew Jackson (Basil Ruysdael) combat the revolting Creek Indian tribe. Joining him is his friend, George Russel (Buddy Ebsen), as they join the army. Crockett's exploits of scouting, hunting and fighting begin to pile up and his name (and legend grow). It all starts the backwoods frontiersman down a road that will take him to the state legislature for Tennessee and ultimately to Washington City as a US Congressman. Always on the move though, always looking for new fresh and unexplored land though, Crockett and Russel end up in San Antonio, Texas at a beat-up old mission, the Alamo, joining the fight for Texas independence against Mexican general Santa Anna and his army of thousands.

Aired as part of Walt Disney's Disneyland TV program in 1955, the Davy Crockett craze began with three hour-long episodes, with two more episodes filmed and shown on TV later that year. I was lucky enough to buy the DVD collection of all five original episodes years ago, and man, was it cool to watch it. It's rather pricey here at Amazon if you were looking to purchase it. 'Frontier' is actually about 90 minutes long while the three episodes in their entirety ran about 150 minutes or so. In the infancy of TV, this was a craze that swept across the country. Kids everywhere needed a coonskin cap and desperately waited for each new episode. Before the Internet, Twitter and all our other modern idiocies, this was a CRAZE. It's easy to see why.

It all starts with the casting of Fess Parker as the famous Tennessee frontiersman, David 'Davy' Crockett. As presented, this is more of a portrayal of the legend of the man, not who he actually was, and that's okay. Quick with a joke, a smile, a welcoming line, Parker becomes Crockett in a career-defining performance. It becomes difficult not to picture Parker as Crockett. He's an explorer, a frontiersman, one who lives by a code, who wants to know he's doing right and then go ahead. He's not content to sit still and is always working toward something. His homespun jokes, his easygoing manner (until he's pushed/cornered), the Crockett we see is maybe not the most accurate portrayal of the actual historical man. Instead, maybe it's what we'd like to think of the man. Again, this is more the myth, the legend of Davy -- not David -- Crockett but it works on so many levels from beginning to end. Parker at his absolute best.

What does a hero need? A sidekick. A friend. A road trip buddy. In steps Buddy Ebsen -- also in a career-best part -- as George E. Russel, a friend and confidant, a fellow deadshot with a rifle, and Davy's conscience at times as they navigate Indian wars, politics and ultimately, a life and death situation at the Alamo.  Most importantly, it's easy to believe in this friendship. Parker and Ebsen have the best kind of chemistry, natural and easy-going. These are our two heroes with Ruysdael's Jackson, William Bakewell, Pat Hogan, Helene Stanley, Mike Mazurki rounding out the cast.

The part of Crockett's life that always fascinated me was him ending up in the Alamo. The Disney version is a streamlined version of the battle but that doesn't take away from its effectiveness. Crockett, Russel and their two new companions, Thimblerig (Hans Conried), a down on his luck gambler, and Busted Luck (Nick Cravat), a down on his luck Comanche warrior, actually ride into the mission during the battle, not before it. Where there was a light-headed air at times with some comedic relief through the first two episodes, it's hard to pull that off with a story that ends with a massacre. Surprisingly dark, unsettling at times, it's nonetheless a perfect example of why people have been drawn to Crockett for going on 200-plus years. He fights for the underdog. He fights for what he believes and he's willing to sacrifice a ton for it, maybe even his life. As for the final assault on the Alamo, it's quite the iconic ending. We see Davy swinging his empty rifle at charging soldiers. We never see him die. It's a more effective, moving ending that way.

In our Alamo portion, also look for Kenneth Tobey as Jim Bowie and Don Megowan as William Travis, the other two heroes of our Alamo Holy Trinity. Some cool moments, including the infamous drawing of the line -- those willing to die cross over -- and Ebsen's Russel stepping in as the Alamo messenger who rides out looking for help...only to find none and still come back. The highlight remains for me the night before the attack, Davy quietly singing a song he's written about Tennessee. The men in the Alamo know what's coming, a somber, thoughtful cloud hanging in the air. A very effective ending for an excellent movie/show overall.

It was a lot of fun catching up with this Disney classic from Parker and Ebsen's scene-stealing roles to the instantly recognizable theme (Listen HERE), this was a gem then and it is now. Highly recommended in whatever format you can find it. I'm hoping to review the final two episodes soon as well, work/schedule permitting! In the meantime, DAVY...DAVY CROCKETT, KING OF THE WILD FRONTIER......That's me singing if you couldn't figure it out.