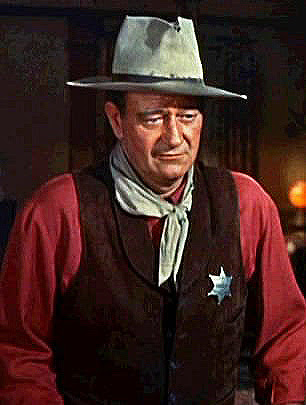 Reviews from one of my all-time favorites, John Wayne. Click on the name of the movie to go to the review.

The Alamo (1960): Wayne plays famed frontiersman and former Congressman Davy Crockett who joins with Jim Bowie (Richard Widmark), William Travis (Laurence Harvey), and some 180-odd defenders in a ruined adobe mission outside San Antonio in 1836. Incredible action scenes -- especially the final assault on the Alamo -- with a great score from Dmitri Tiomkin and a great supporting cast.

The Sons of Katie Elder (1965): Fresh off a bout with cancer, Wayne shows he's as strong as ever in this underrated western with director Henry Hathaway. Wayne, Dean Martin, Michael Anderson Jr. and Earl Holliman are the Elder brothers, all returning home when their mother, Katie, passes. They also find their father died under somewhat mysterious circumstances. Traditional western, but a classic in its own right.

Reap the Wild Wind (1942): A change of pace for the Duke, and not necessarily a good thing. Director Cecil B. DeMille helms this quasi-epic that's never quite as good as it should be. Co-star Paulette Goddard does her best Scarlett O'Hara impression and fails epically. Good supporting cast, but they're often poorly used in this soap opera-ish, ultra dramatic epic.

The Train Robbers (1973): A pretty good example of the films Wayne did late in his career in the 1970s. Nothing flashy, just solid entertainment with some familiar co-stars. Wayne, Rod Taylor, Ben Johnson and Co. team with widowed Ann-Margret to find a treasure of gold in an abandoned, wrecked train. The problem? Almost 40 gunmen are on their trail. Not a classic, but a lot of fun.

True Grit (1969): Maybe Wayne's most iconic role, that of drunken, one-eyed marshal Rooster Cogburn. This is the part he finally won his first Oscar for, one he fully deserved. Some unconvincing supporting parts -- Kim Darby, Glen Campbell -- aren't great, but this movie rises on the shoulders of John Wayne. Also look for Robert Duvall and Strother Martin in supporting roles.

Blood Alley (1955): The 1950s more than any other decade had some bad decisions and misfires for the Duke, and this is one of them. His performance is okay if unspectacular, but the dull story, casting of American actors in stereotyped Asian roles, and a general lack of excitement shoot this one in the foot. Not a good movie.

The Cowboys (1972): An asterisk goes next to this one for its lore among trivia, but no spoilers here. This is John Wayne as many people remember him. A tough but fair cowboy/rancher forced to take teenage boys and younger as cowboys on a cattle drive across the brutal west. Some complain of its heavy-handed nature, but I disagree. A classic -- including one of the more startling scenes I've ever seen in a western. Bruce Dern is a frightening villain.

The Shootist (1976): Hollywood legends don't go always get to pick their final role, but for Wayne, it would have been impossible for him to pick a more appropriate curtain call. He plays J.D. Books, an aging gunslinger diagnosed with cancer that only allows him a few painful months. Death hanging over him, Books goes about settling his affairs. How Wayne didn't get at least an Oscar nomination for this movie, I'll never know.

3 Godfathers (1948): An underrated, quasi-Christmas pairing with director John Ford. Wayne, Pedro Armendariz and Harry Carey Jr. are three bank robbers (the nicest ones you've ever met) on the run across the desert, only to find a dying woman who gives birth before passing away. The three bank robbers are forced to care for the infant, the desert almost willing them not to.