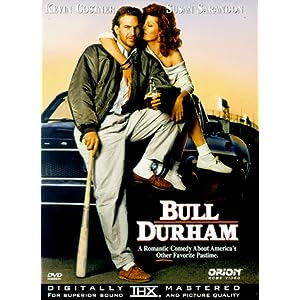 Of all the sports out there -- and there's plenty -- my favorite is and always will be baseball.  There's something simple about America's pastime that you either appreciate or you don't. Little middle ground exists. You can watch 10,000 baseball games over the course of your life and never see the same game twice. More than that, on any given play in any stadium across the country, you can see something you will most likely never see again. Baseball is baseball, a sport and a beast unto itself.

One of the best movies to ever try and explain the beauty and lunacy of baseball was 1988's Bull Durham. With professional baseball, there are the thousands of players who want nothing more than to play in the Majors, or as 'Bull' puts it....make it to The Show.  This is a story from the minor leagues though, players who don't necessarily have a great shot at future stardom. This is a movie about long bus trips, games in front of half-filled stadiums, eccentric players left and right, and most importantly, that dream of making it at the highest level even if it's just for a game.

Recently signed for a large bonus, rookie pitcher Ebby Calvin 'Nook' LaLoosh (Tim Robbins) has been assigned to Class A ball, the Durham Bulls in the Carolina League. LaLoosh has all the talent in the world, but he struggles on focusing, keeping his mind in the game, and therefore his pitching control. Hoping to groom the star pitcher for the majors, the organization brings in career minor leaguer Crash Davis (Kevin Costner), a catcher with 12 years experience under his belt. The rookie and the vet don't exactly get along, making things worse when Annie (Susan Sarandon), a diehard "supporter" of the team takes an interest in them both. Each season Annie picks one player and hooks up with them all summer, prompting a great season. How's this mess of a situation in the middle of a baseball season going to be fixed?

Where to start with Bull Durham? Lots of good starting points -- there's a reason it is held in high regard among baseball fans -- but the best point to start is Kevin Costner, a baseball fan and a movie star. With this movie and Field of Dreams and For the Love of the Game, Costner has shown his love and respect for the game of baseball.  Playing Crash, he looks and sounds like a baseball player. You're rooting for him with the thousands of miles he's put on his legs chasing his dream. Signed by the Bulls as a mentor, he has the dubious honor of chasing the all-time minor league home run record but wants nothing to do with it. He's a baseball player on his last legs looking to stay in the game a little while longer, and Costner nails the part.

Director Ron Shelton, the screenplay and the cast get this one right. An easy 3-for-3. There are sports stories, and there are chasing your dream sports stories. For the most part, that's what these players are doing albeit in a funny fashion. There's the superstitious Hispanic player blessing his bat and glove, the bible-thumping player who leads a prayer group, the manager (Trey Wilson) trying to hold it all together, and his assistant (Robert Wuhl) always ready with a word. 'Bull' gets the little moments right; the manager losing his mind following a bad loss (watch HERE), Crash's 'I believe' speech (watch HERE), the meeting of the minds at the mound (watch HERE), LaLoosh striking out 18 in his debut and walking 18 batters, and so many more, too many to mention.

Selling these moments along with Costner is Susan Sarandon and Tim Robbins.  Sarandon's Annie is an interesting character, a baseball groupie if a highly intelligent one. Each summer she picks one player and teaches him the ways of love and baseball, always producing his best year for himself and the team in the process.  She's torn between Nook and Crash, knowing she can help the star pitcher but wanting Crash instead. Robbins is hilarious as Nook, the tall, lanky and generally clueless star prospect. He wants to do things his way, accepted ways be damned. In his cluelessness though, he's likable in a part that would have been easy to dislike. And as a topper, seeing his Fernando Valenzuela-like pitching motion is hysterical.

Where other movies don't understand the people and places they're showing, 'Bull' hits it right on the button. This is a movie and story that knows baseball, that respects baseball and all its idiosyncrasies, all its positives and negatives that can switch with the snap of a finger. It is a game that people and fans have always been drawn to, and you can see why through all the craziness. In its simplicity, it is a most beautiful game.