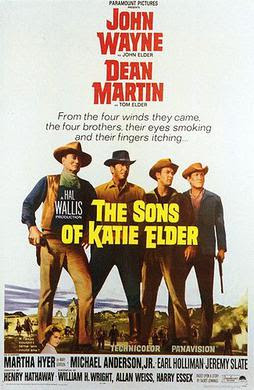 At the height of his long and very popular career in 1964, John Wayne was diagnosed with lung cancer. He underwent surgery to remove one of his lungs and two ribs, putting him out of commission for awhile. Production was even delayed on the movie he was working on, but he returned following the surgery and a cancer-free Wayne returned with a bang, bringing his usual imposing presence to the criminally underrated 1965 western, The Sons of Katie Elder.

It's been 10 years since gunfighter John Elder (Wayne) has returned home to Clearwater, Texas, but when news reaches him that his mother, Kate, has died, he returns home. There he finds his three younger brothers, Tom (Dean Martin), a gambler, Matt (Earl Holliman), a hardware store owner, and Bud (Michael Anderson Jr.), the youngest. Dealing with the guilt of not having seen his mother in years, John and his brothers find out their father was killed just six months earlier under suspicious circumstances. The Elder ranch is now owned by Morgan Hastings (James Gregory), but no one is quite sure how he came to be the owner. The Elders want some answers as to what exactly happened, but mostly they're trying to do something for their long-suffering mother. John intends to do a right, proving that Kate's faith in her sons was well founded.

Coming back from cancer (although it would eventually kill him), this 1965 film marked a big of a turning point for the Duke. From here on in through the end of his career, Wayne could be accused more of playing himself repeatedly in more viewer-friendly, cookie-cutter movies. He knew what his fans liked, and he intended to give it to them. Take none of that as a negative, I love many of the post-1965 movies Wayne made. They're fun to watch and easy to digest. There are good guys and bad guys with little middle ground. You know how it will end before it even starts. Once again, the movie equivalent of comfort food. 'Sons' has a ton going for it, ranging from Elmer Bernstein composing one of his most underrated and memorable scores ever (listen to the main theme HERE) to the location shooting in Durango, Mexico and along the Rio Grande. It's the little things that count.

There are better, more iconic westerns, but I think 'Sons' would be a fitting introduction to someone who either isn't a fan or just doesn't care for westerns. Above all else, this is a movie -- not just a western -- about family, in this case a family coming back together after years apart. Wayne is the oldest brother, John, a gunfighter who's name precedes him wherever he goes. Martin is the wily gambler, Holliman the button-down businessman, and Anderson Jr. the college dropout. The movie's best moments come from the quartet of brothers reuniting, talking, fighting, working to make the Elder name something to be proud of in their Ma's name. There isn't a weak performance in the bunch. The chemistry is spot-on, the dialogue crackles like four brothers actually would talk -- in love and fighting -- and when the time comes they put aside their differences to work together.

Who ends up being one of the more memorable characters is the never seen Katie Elder. We hear a lot about her from anyone who ever met her, not one person having something negative to say about her. Martha Hyer's Mary Gordon, the boarding house owner, gives a great monologue about Katie lying about her boys, telling the town they always sent money, always wrote to check in. Some of the best parts of Bernstein's score come in these quieter moments as both the Elders and the population of Clearwater reflect on Katie's passing. All she leaves behind is two worn dresses, a rocking chair, and a "legacy" of her four boys. The movie's final shot is a touching one, surprising for a western oater.

Not enough yet? Still haven't sold you on this one? 'Sons' has one of the best supporting casts to come out of a 1960s western. Start with Gregory as Hastings, the businessman looking to put Clearwater on the map, no morals needed. A young Dennis Hopper plays Hastings' squirrelly son, Dave. Western vet and character actor Paul Fix is a scene-stealer as Sheriff Billy Wilson, an old friend of the Elders trying to keep peace in his town with fiery deputy, Ben Latta (Jeremy Slate in a solid supporting role), at his side. In a small but key role, George Kennedy is particularly intimidating as Curley, a hired gun working for Hastings. Also look for John Doucette, John Qualen, Sheldon Allman, and Strother Martin in supporting roles.

From director Henry Hathaway, 'Sons' is never listed as one of the all-time western greats or even among John Wayne's best. Why? I'm not sure. There isn't a ton of action, most of the gunplay saved for the last 30 minutes, including a high tension shootout in El Saltito, Mexico, a gorgeous and familiar location for western fans. The story is very much more interested in characters and their dynamic than making a shoot 'em up flick. It's a wise choice. The script is about as perfect as a western can get, and the cast beyond perfect. Underrated in any number of categories, and one all movie fans should be able to enjoy -- western or not.

P.S. Watch the movie and tell me otherwise. I'm convinced Dean Martin's Tom is supposed to die in the end. One throwaway line saves him, but it always felt tacked on to me. Any opinions?