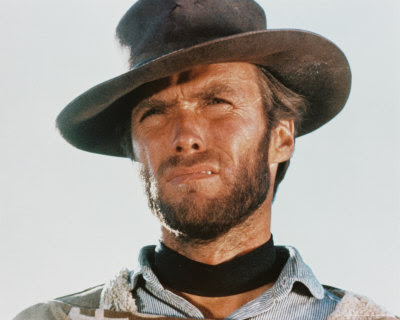 TV turned movie star turned Oscar-winning director, Clint Eastwood is one of the most talented people to ever be in the movies. Oh, and he's cooler than you. Click on the movie titles for full reviews.

The Good, the Bad, and the Ugly (1966): Eastwood, Eli Wallach and Lee Van Cleef play three gunslingers searching for $250,000 in buried gold coins amidst the chaos of the Civil War. One of the best westerns ever and on a bigger level, one of the best movies ever. Director Sergio Leone has a classic here, an epic story that has gotten better with age. Composer Ennio Morricone's score is easily an all-time top 5 musical score.

Sudden Impact (1982): Eastwood's fourth Dirty Harry movie. A weaker effort among the five movies, but Eastwood is eternally watchable in the part. Something is missing from it though that I can't quite put my finger on.

Every Which Way But Loose (1978): Clint Eastwood explores America as a bare-knuckle boxer in his truck with friend Geoffrey Lewis and an orangutan named Clyde. If that doesn't make you smile, this ain't your movie. It's Eastwood traveling with a monkey named Clyde!!!!! How could that not be great?

Tarantula (1955): Quasi-Eastwood movie, the young actor playing a small but key supporting role in the finale. Giant tarantula terrorizes the American southwest. Pretty typical 1950s creature flick, but a good example of how enjoyable these low-budget, horror movies could be.

Hereafter (2010): Eastwood the director, this time weaving three seemingly separate stories about death and what awaits us once we're gone. Not what you would expect from an Eastwood film considering his track record, but this is a near-classic.

Invictus (2009): Eastwood the Director, Part II. True story of the South African rugby team that helped President Nelson Mandela (Morgan Freeman) unite the racially torn apart country. Matt Damon is the real star in this sports movie that amounts to something more, something bigger in its message.

The Beguiled (1971): Playing a wounded Union soldier in the deep south, Eastwood goes about seducing the southern belles at a school for young ladies. An odd, offbeat film, dark and Gothic in its atmosphere hidden away in the backroads of the south. Great, surprise ending.

Play Misty for Me (1971): Making his directorial debut, Eastwood plays a radio DJ who has a die-hard listener who quickly becomes a stalker. Eastwood did his best to avoid being typecast -- as a director and star -- after climbing to fame in the westerns, this film a prime example of both. Different from typical Eastwood, but good nonetheless.

Kelly's Heroes (1970): Eastwood, Donald Sutherland, Telly Savalas, Don Rickles and a motley platoon of American GIs go behind the lines in WWII to rob hidden Nazi gold. Fun, fun and more fun. No bigger message or objective, just one of the most entertaining, funny and action-packed movies around. One of my all-time favorites. Also look for Carroll O'Connor as a possibly unhinged American general caught up in the hunt.