Hour of the Gun 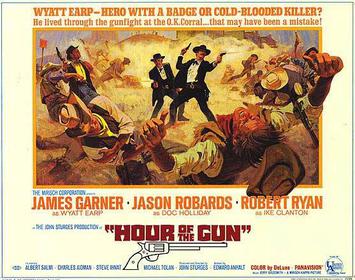 One of the seminal moments in American history, especially in the 19th Century, the gunfight at the O.K. Corral is synonymous with the wild, wild west. It was a gunfight that only lasted 15 or 20 seconds, but the men involved would became famous because of their actions. What about after the gunfight though? What happened next? That is a story that is far less well-known, but it gets a fascinating examination in a mostly forgotten 1967 western, Hour of the Gun.

It's October 26, 1881 in the Arizona silver boom-town of Tombstone. Deputy Marshal Wyatt Earp (James Garner), his two brothers, and their friend Doc Holliday (Jason Robards), are heading for a fight after a long-running, long-simmering feud with Ike Clanton (Robert Ryan) and his gang of gunmen, bandits and rustlers. A gunfight ensues with three men -- all outlaws -- killed while Wyatt's brothers are wounded. The fight does nothing to end the feud, only adding fuel to the fire. The immediate response begins in a courtroom as Wyatt, Doc and the Earp brothers are brought up on charges for their actions that led to the gunfight and then for outright murder. This won't be resolved with words though. Too much has passed between the two sides with too many deaths for it to be fixed so easily. Wyatt and Doc live by the gun as does Ike Clanton. Let the bullets fly and those who get caught in the way...so be it.

From the first time I saw 1993's Tombstone, I was fascinated not just by the gunfight at the OK Corral but what happened after it. Unless I'm missing a flick, this is the first western to dive in headfirst to the aftermath. An unofficial sequel from his film 10 years earlier, Gunfight at the OK Corral, director John Sturges turns in a dark, moody, character-driven angle of the story. There's gunplay but not a ton. The story condenses months and months of history into a tightly-packed 105-minutes but one that doesn't feel too rushed. It's a daunting extended stretch to handle but Sturges and writer Edward Anhalt do a pretty solid job condensing and tweaking and twisting here to make it more manageable.

Two years later, Sam Peckinpah's The Wild Bunch would kick open the door for the western, effectively starting the genre on a path that proved to be its doom. The spaghetti westerns started it, Peckinpah continued and the revisionist westerns of the 1970's finished it off. Where's 'Hour' fit? Somewhere in between. It isn't a revisionist western. It's just a straightforward, mostly honest, not heroic interpretation of the real-life events. There aren't heroes, just less unlikable individuals. Case in point is Garner's Wyatt, not the crisp, clean, honest lawman he's often portrayed as. Here, he's a hypocrite, blinded with rage and almost completely driven by it. Towns are run by the rich, everything depends on power and money, and that power depends on backstabbing, back-shooting and all sorts of underhanded dealings. This ain't no good guys in white hats vs. bad guys in black hats. A precursor of the things to come in the western genre.

In film or on television, James Garner has a reputation as a likable presence, a sympathetic hero so....it's awesome to see him take these darker roles, like 1970's A Man Called Sledge. As we've learned, Wyatt Earp wasn't necessarily the heroic, noble lawman he's often portrayed as. 'Hour' delves right into that concept. Here, he's a revenge-seeking murderer hiding behind a marshal's badge and a warrant for arrest. It's a fascinating character and not necessarily sympathetic. Garner doesn't disappoint with this darker role. Just wish he had done more roles like this!

The key relationship in all the Earp/Tombstone movies though is between Wyatt Earp, the law officer, and Doc Holliday, the gambling dentist slowly dying of tuberculosis. All Holliday performances pale in comparison to Val Kilmer in 1993's Tombstone, but Robards is pretty damn good and belongs in close second with Dennis Quaid in the otherwise painful Wyatt Earp. Robards does what he always does. He quietly steals all his scenes to the point you don't even realize he's doing it. His chemistry with Garner is impeccable, a friendship with more of an edge than we're used to seeing. Their arguments become heated to the point of lashing out violently. Through it all though, there's an unspoken bond between them, two loners, two outsiders who have found the unlikeliest of friends. Two excellent leading performances.

Beyond Ryan, 'Hour' is light on star power, but that's not a bad thing. Ryan's Ike Clanton is probably the most exaggerated part here with the movie Clanton not resembling the actual historical Clanton. Still, it's Robert Ryan in sneering, condescending villain mode, and that ain't a bad thing. Wyatt's misfit posse includes Monte Markham, William Windom and Lonny Chapman. Their targets include Michael Tolan, Robert Philips, Steve Inhat and a very young Jon Voight. Too many familiar faces from film and television to mention, but also look for Albert Salmi, Karl Swenson and Bill Fletcher among many others.

I can't quite put my finger on it, but I liked 'Hour' much more on this second viewing than the first (it had been at six or seven years). It isn't an easy western to watch, and doesn't do much to pull you in in any sort of obvious fashion. That said, there's just something about it. Filmed in Mexico with cinematographer Lucien Ballard (one of the all-time greats), the movie looks stunning. Throw in one of Jerry Goldsmith's more underrated scores and it all adds up. Listen to the score HERE. It's a familiar story by now, that of Wyatt Earp and the OK Corral, but this adult western holds together quite well. Highly recommended.