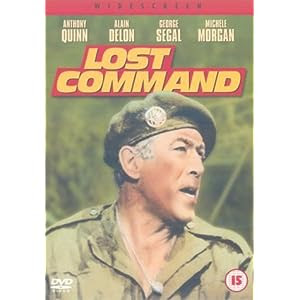 Last year I was able to catch "Battle of Algiers" on TCM after hearing so many rave reviews about the almost-documentary film detailing a part of the Algerian War in the late 1950s and early 1960s. It was one of the best movies I saw last year so when I saw there was a more Hollywood take on the war, I had to at least give it a try.


Lost Command tells the story of the Algerian fight for independence mostly from the French perspective, including Lt. Colonel Pierre Raspeguy's 10th Parachute Regiment as they tangle with a rebel group in the hills and then dealing with terrorists in Algiers. Anthony Quinn plays Raspeguy, a veteran soldier worn down by all the fighting but who still feels the need to accomplish his mission. The movie begins at the disastrous battle at Dien Bien Phu as the Vietminh capture the last of Raspeguy and his men.


After spending several months in a prison camp, Raspeguy and his men are released, but the colonel finds out his regiment has been disbanded. It isn't long before the French command offers him a new regiment, albeit with men that were rejects from other units. Raspeguy agrees, and with some men from his previous unit, including Alain Delon's Capt. Esclavier, begins to train his men.


The story is good, and by the end the characters are more than just cardboard cutouts. Delon is a good counter to Quinn, his Esclavier is an idealist who needs a reason to fight, not just for the thrill of it all. In an odd choice for casting, George Segal plays Mahidi, an Arab leading a group of rebels and an ex-paratrooper who served with Raspeguy. Michele Morgan and Claudia Cardinale are the love interests, with Cardinale getting a chance to play a more villainous role. Raspeguy's men include Maurice Ronet as Boisfeuras, Maurice Sarfati as Merle, Jean-Claude Bercq as Orsini, Syl Lamont as Verte, and Gordon Heath as Dia. Spaghetti western fans should look for small parts for Al Muloch and Aldo Sambrell. Also look for Gregoire Aslan.


The high points of the movie, besides the strong cast, are the action scenes. Three major set pieces are featured, the opening attack at Dien Bien Phu including a parachute drop gone horribly wrong, an ambush of the 10th Regiment by Algerian rebels, and a firefight on a mountain side as Raspeguy and his men attempt to stop Mahidi from acquiring an arms shipment. All three battles have an epic feel to them, especially the finale.


The DVD has a widescreen presentation of the movie that's never looked better and is a significant improvement from the pan-n-scan VHS tape. The Spanish locations benefit the most with the widescreen. Special features are two trailers, one for Lost Command and one for The Guns of Navarone. An action picture more than anything, I highly recommend this one.
Lost Command (1966): ***/****
Posted by Tim at 11:47 AM