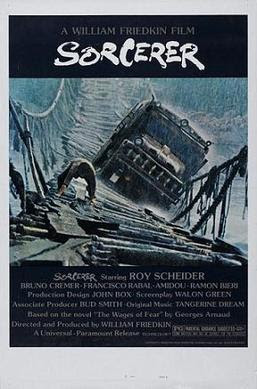 When it comes to remaking a classic movie, the newer picture almost never lives up to expectations. That's one happened at first for William Friedkin's 1977 remake of The Wages of Fear, a classic French film from the 1950s. It opened the same summer as Star Wars (could you have worse timing?) and received a lukewarm response from critics. Now over 30 years later, Sorcerer has slipped through the cracks unfortunately. What makes it worse, the DVD is a major dissappointment, but that's for later.

Not much changes from the 1953 film with the same storyline. The one major addition is how the introductions are handled. The first 30 minutes introduces 4 main characters, all on the run for one reason or another. Jackie Scanlon (Roy Scheider) is a getaway driver on a robbery gone horrifically wrong. A mafioso is hot on his trail looking for revenge. Victor Manzon (Bruno Cremer) is a French banker who discovers 15 million francs are missing from his bank. He's going to take the fall for it unless he can find the money. Nilo (Francisco Rabal) is the most mysterious character as a hitman supposedly hiding from his past, but we never find out why. Kassem (Amidou) is the last surviving member of his tight-knit terrorist cell.

So all running from their problems, the paths of these four men crosses in a desolate, rundown Nicaraguan village. They all want out but have no money or way to leave. A solution presents itself, an incredibly dangerous, almost suicidal one at that. A local oil well needs to be shut down and cleaned out, the only thing that will do the job is nitroglyercin. The catch? Two trucks with two drivers apiece will have to transport the nitro on a 218-mile trip on a bumpy, little-used, washed out road where the slightest bump might set off the explosives.

Sorcerer creates a sense of doom, a building feel of dread like few other movies have. With each bump, each turn of the wheel over a rickety bridge, your stomach drops. Filmed in the Dominican Republic, the movie has a gritty, realistic, almost documentary like feel to it whether its in the villages or winding through the thick jungle roads. The last half hour feels almost apocalyptic as the end of the trip is within reach. Tangerine Dream's electronic score just adds to that feeling of doom and dread. It all builds up to an ending that completely caught me by surprise. It's not quite the downer ending of the original, but Friedkin makes a switch that really works.

The DVD dissappoints, but I've read rumors of a special edition coming out. Don't hold your breath but at least keep it in mind before buying the current disc. The movie is in a grainy-looking fullscreen presentation which actually works, adding to the grittiness of the movie, but I'd like to see the movie in widescreen. Special features are a trailer and some always exciting cast and crew info. It's a great movie though, and should not be missed.