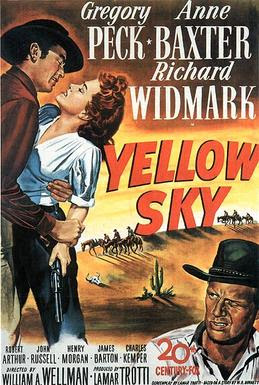 In the late 1940s when westerns still portrayed good guys in white taking on bad guys wearing black, William Wellman's Yellow Sky was released in theaters in 1948. It's a western that seems more fitting for the late 1960s or early 1970s with its presentation of characters and their interactions.

In 1867, a gang robs a bank in a small town and high tails it out of town with a cavalry troop hot on their trail. Their leader, Stretch Dawson (Gregory Peck), takes them out onto the salt flats, 70 miles of desolate, uninhabited land, leaving the cavalry behind. After days of riding with little water, they stumble upon a ghost town called Yellow Sky. The only residents are an old man and his granddaugther. Dawson and Co. begin to wonder why these two are out in the wilderness? They find out quickly enough, there's gold in the hills. Tensions rise immediately at the mention of gold. Who's going to turn on who?


First off, the characters look like they're straight out of the old west. Their clothes are dusty, they stink, their faces show the wear and tear of riding in the sun, and they're all sporting beards. Remember, no barbers out in the desert. Too many westerns have the star in immaculate clothes that look newly-bought, but not here.


Second, there's no good guys anywhere in sight, just varying degrees of badness. Peck ends up being the closest to the hero as the gang leader who begins to question what his men are doing. Richard Widmark is his counterpart, Dude, the biggest villain in the group who's interested in himself and little else. The gang is willing to turn on each other at the drop of hat. Supporting cast as the gang includes Robert Arthur, Harry Morgan, Charles Kemper, Robert Adler, and John Russell.


Third, a female character is introduced but she doesn't feel like an add-on, she belongs. Anne Baxter plays Constance Mae, "Mike," the young woman living with her grandpa out in the desert. She can shoot and throw a punch as good as any man. Baxter presents a strong female character when so often westerns used women as the damsel in distress.


Released late in the 40s when film noir was so popular, this western could fit in that genre. Lots of pyschological undertones, shadowy scenes, and plenty of backstabbing. Yellow Sky is almost bored with the action scenes, but it works. A finale with a three-way shootout in an abandoned saloon isn't even seen, only heard. It doesn't even matter though, you'll be wrapped up in what's going on.


The DVD has the movie in its standard presentation, looking great with the black and white cinematography in the Death Valley filming locations. Shots of riders crossing a vacant desert as blips on the sand stand out as memorable, years before David Lean did similar shots in Lawrence of Arabia. Special features include three photo galleries, a trailer, and three trailers for other Fox Flix westerns.