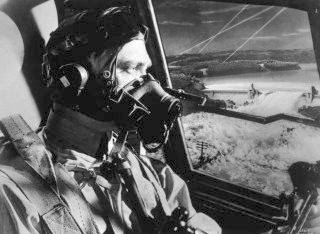 All too often, war movies try to be something bigger, something with a message instead of just focusing on the story at hand. And that's the thing, most of the stories at their most basic are interesting enough without a lot of extra junk added on. A prime example of this? The Dam Busters from 1955, a British movie about a mission undertook by British bomber pilots midway through WWII. The story is interesting, and the movie is content to tell that story.


Doctor B.N. Wallis is a very intelligent if somewhat eccentric aviation engineer living in England in 1942. He's been working for months on a plan that could severely disrupt the German war effort. To create just one ton of raw steel, the Germans must use 100 tons of water. What's the best way to slow the process up? Knock out three dams deep in Germany that supply 2/3 of the needed water. Wallis develops a bomb that when dropped from a bomber at low altitudes skips across water toward the dam much like a rock skipping across a lake.
Of course things don't go smoothy as Wallis perfects the skipping five-ton bombs. That's just part of his problems, ranging from war materiel to dealing with the government. Throw in the issues the British pilots are having, and you've got a highly entertaining story. The pilots will attack the dams at night, flying just 60 feet up, and must drop their bombs with pin-point timing so the payload is delivered at just the right time.
The actual attack on the dams is handled perfectly, including some pre-CGI special effects that look dated, but what do you expect? The movie was made in 1955 so keeping that in mind, the effects aren't that bad. Besides, I was so wrapped up in whether the bombing runs would work I didn't even notice the so-so effects. Throughout the movie, the aerial footage stands out as incredibly well-done, and it's led some people to compare it to the end of Star Wars. See for yourself.
Cast-wise, the list goes on and on but two characters are at the forefront, Michael Redgrave as Wallis, and Richard Todd, a real-life war hero, as Wing Commander Guy Gibson, the leader of the British bombers. They're about as different as two men can be, but they share a common goal and become friends because of their shared experiences. Also, keep an eye out for a young Robert Shaw in just his 2nd movie and first speaking part.
One other thing mentioning that made me rewind a couple times. Gibson's dog is named 'N*gger." Looking the movie up at IMDB, I saw I wasn't the only one surprised by the name. Apparently, the word was a way of describing a black dog in England at the time, and in no way is any sort of racial slur. Still, I had to mention it.
Posted by Tim at 11:27 PM