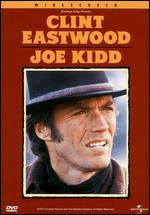 After the huge success of Dirty Harry the year before, Clint Eastwood returned to the genre that made him a star, the western, in 1972's Joe Kidd, the story of a range war in turn of the century New Mexico. It's another Eastwood western I've always avoided some because I enjoyed the Leone spaghettis so much, but I enjoyed it even with all its flaws of which there are many.
Eastwood is Joe Kidd, a small-time rancher who's just received a 10-day jail sentence for a number of offences. He's let out when a rich land owner, Frank Harlan, wants to hire Joe to lead a hunting expedition of sorts, a hunt for a Mexican stirring up trouble when it comes to land rights by the name of Luis Chama. Kidd turns down the offer but changes his mind when he returns home to find that Chama and his gang have stolen his horses and beaten one of his hired hands. Kidd joins up with Harlan and his posse, finding out how brutal their methods can be on the trail.
For one, it's a short movie at 88 minutes. I was disappointed to read the DVD has missing scenes from previous releases or TV showings. I can't verify having never seen it, but a DVD always gets lower points for something like that. With the short running time, you lose a ton of character and plot development. John Saxon plays Chama, appearing for the first five minutes and then disappearing until the last 20 minutes. Robert Duvall has always been a good villain, and lives up to reputation here, but his character is as one-dimensional as they come. Must kill Chama!

Some of these issues most likely were caused by the lack of a finished script. Director John Sturges improvised on the fly, especially in the finale. There's a cool stunt with a train going off the rails, but a few minutes later, the movie just sort of ends. It's not one of those open-ended conclusions where you're left to interpret what happened, the movie is over and credits roll.


In spite of these flaws, it's a western I enjoyed. Eastwood is a more laid back gunslinger, and even if he is underwritten, Duvall provides a good counter to him. Composer Lalo Schifrin does his own version of a spaghetti western score that's memorable, and the California and Old Tucson locations are shot beautifully. Harlan's posse of hired guns, Lamarr Simms (Don Stroud), a hothead who would like nothing more than kill Kidd, Olin Mingo (James Wainwright), a sniper who can hit anything, and Roy Gannon (Paul Koslo), the calm, cool fast draw specialist, are also good villains, if underused. The showdown the movie builds to with Kidd and Simms has no pay-off, too bad, it would have been a goodie.
The DVD, missing scenes and all, is an average disc. Widescreen presentation is noticeably scratchy in certain scenes, but otherwise appears okay. Special features include the always boring production notes with cast and crew info, and a trailer that plays up the action in the movie. A western with flaws, sure, but still check it out.
Joe Kidd (1972): ***/****
Posted by Tim at 1:50 PM