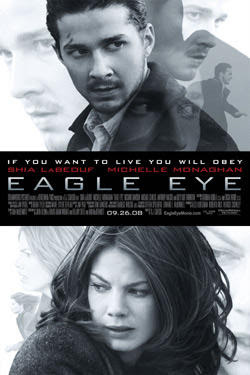 As far back as Stanley Kubrick's "2001: A Space Odyssey" in 1968, movies have been warning us not to become too reliant on technology, be it computers, cell phones, automated weapons systems, you get my drift. But as the movies show, we're pretty dumb overall so if technology makes things easier then we're all for it. Last year's Eagle Eye continued this trend in the form of an action thriller that I enjoyed a lot more than I thought I would going in.


Shia LaBeouf plays Jerry Shaw, your typical underachiever who has some potential to do things with his life but chooses to do otherwise. He works at the Copy Cabana after dropping out from Stanford, but one day finds $750,000 in his bank account and an apartment full of ammonium nitrate and high-tech military weapons. His cell phone rings and a woman tells him he has 30 seconds to get out of his apartment before the FBI shows up to arrest him. Of course, Jerry is suspicious, I guess I would be too, and doesn't believe her.


Across town, a similar thing is happening to Rachel Holloman, played by the very beautiful Michelle Monaghan, a single mom who has just sent her son to Washington DC with his class to play at the Kennedy Center. The woman on the phone tells Rachel she must do everything she says or else her son's train will derail. So begins a movie that doesn't slow down until the very end. Is the whole movie kinda ridiculous? You bet, but that's part of the fun. In this day and age, most people's lives are so closely tied to their phones, Blackberries, IPODS, and other technological advances, so a movie that plays on the fear that it's the technology ruling us is as timely as it will ever be.


Going into Eagle Eye, I hadn't liked either big LaBeouf movie, he was okay in Indy 4, and all-around bad/annoying in Transformers, so I had low expectations. With the right part here where his character is as much in the dark as the viewer as to what's happening, he was pretty good. However, the pessimist in me says the ending was a bit of a cop-out as to how his character is dealt with. Monaghan joins Shia as the female lead and does a reliable job with a stereotypical character. There isn't much development in either character, the basic outline is explained with their backgrounds, and vamoose, we're off! In the supporting cast, Billy Bob Thornton jumps out as one of the better parts, a wisecracking FBI agent just trying to figure out what exactly is going on.


The movie has its flaws, but it isn't enough to distract from the overall product. The story moves along too fast for you to even think about the flaws. It's an exciting movie, and a timely one, that's worth a watch if nothing else. And always remember that someone is listening, in this case, your cell phone. I always knew those things were evil.


One thing I'll never complain about, the original teaser trailer that was shown in theaters. It's one of the better teasers I've seen in quite awhile.
Posted by Tim at 12:49 AM