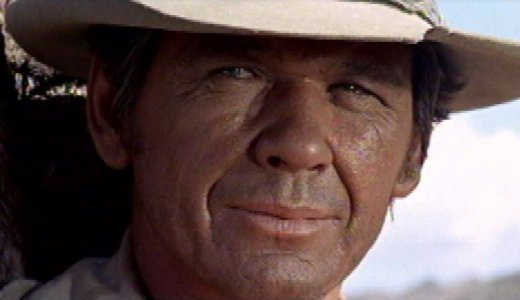 A former coal miner, Charles Bronson carved out quite a niche for himself as an actor. Some detractors point out his limited range and sometimes poor choice of movies, but Bronson was a true movie star, a presence to be reckoned with on the screen. Click on the movie titles to read the full review.

The Great Escape (1963): One of Bronson's key roles in the 1960s, a supporting part but one he clearly makes his own. He plays Danny, a Polish pilot flying with the Canadians, now a P.O.W. desperately trying to escape a German prisoner of war camp. Most importantly, he can show he can in fact act, and doesn't get lost in a cast that includes Steve McQueen, Richard Attenborough, James Garner, James Coburn and many more.

Target Zero (1955): A "unit picture" set during the Korean War. Good cast includes Bronson, Richard Conte, Chuck Connors, L.Q. Jones, the members of a small platoon trying to get across the Korean countryside to their own lines, a pretty nurse in tow. Never quite adds up, including a disappointing ending, but there's potential at least.

Vera Cruz (1954): A highly influential western, one that especially affected Sergio Leone and the spaghetti westerns. Burt Lancaster is a devilish anti-hero, teaming with Gary Cooper to lead a gang of gunfighters and cutthroats (including Bronson and Ernest Borgnine) involved in the fighting in the Mexican Civil War between Mexico and invading French forces. Dark, violent and cynical, a western ahead of its time.

You Can't Win 'Em All (1970): Teaming with Tony Curtis, Bronson stars in this forgotten, underrated and generally odd but entertaining mercenary story. A quasi-remake of Vera Cruz, it's set in the Turkish Revolution of the 1920s and packs a whole lot of action. If you can find a copy, do so. It's also available to watch at Youtube.

Run of the Arrow (1957): Another example of a young Bronson being typecast as a minority character, this time as a Sioux warrior. It gets points because it doesn't deify the Indians in the wild west, presenting them as human, flawed individuals, much like the "angelic" whites they're fighting. Rod Steiger and Brian Keith co-star in this underrated, very different western.

Death Wish (1974): Probably Bronson's most well-known and iconic roles, a New York City vigilante who decides he's had enough of being pushed around. It is a surprisingly bare-bones story, but Bronson as Paul Kersey makes this movie worthwhile. All 382 sequels? Eh, not so much. Also features one of the all-time great closing shots in a movie.

Violent City (1970): Bronson, Telly Savalas, Italian director Sergio Sollima working together in the story of a hit man who may have been betrayed by his employer. Straightforward story doesn't offer much in the way of genuine twists or surprises, but the action carries the day.

The Magnificent Seven (1960): One of the best westerns ever, a story that explores the myth, glory and heroism of the wild west gunfighter. Bronson joins a cast that includes Steve McQueen, Yul Brynner, Eli Wallach, James Coburn and Robert Vaughn, more than holding his own. His part as half-Mexican, half-Irish gunfighter Bernardo O'Reilly ends up being the most human of all the parts. Great movie, one of my all-time top 5.

Never So Few (1959): Bronson again holds his own as part of an ensemble cast, joining Frank Sinatra, Peter Lawford, Richard Johnson, and Steve McQueen. The story follows American commandos fighting with Kachin (Burmese) guerrilla fighters versus the Japanese. It isn't a big part at all, but he makes the most of his limited screentime.