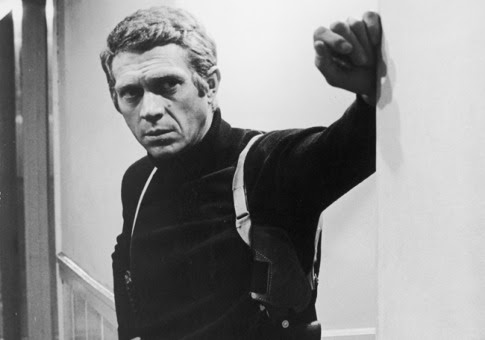 One of the coolest actors to ever grace the screen, Steve McQueen died in 1980 of cancer. In a film career that spanned about 25 years, he certainly made a name for himself, especially an impressive run of classics, near-classics and fan favorites in the 1960s.

The Getaway (1972): McQueen teams with director Sam Peckinpah for this no-frills crime thriller. McQueen is Doc McCoy, a paroled convict who gets double-crossed by a politician for a bank robbery. When the plan goes awry, Doc hits the road with wife Ali McGraw. Hired guns are after them, and his face is plastered all over the television. Some big, big flaws, but a solid movie mostly because of McQueen and Peckinpah's direction.

The Great Escape (1963): Ranking with John Wayne's The Alamo as my all-time favorite movie(s), this is the true story of Allied prisoners of war working together to pull off one of the most incredible escapes ever. McQueen joins James Garner, Richard Attenborough, Charles Bronson, James Coburn, Donald Pleasence, David McCallum and Gordon Jackson in one of the greatest casts ever assembled for a film. Notable for McQueen's famous motorcycle chase toward the end.

Hell is For Heroes (1962): More proof that a large scale isn't necessary for a successful war movie. An undermanned squad of GIs (McQueen, Harry Guardino, James Coburn, Bobby Darin among others) must defend a portion of the Siegfried Line intended to be held by a full company. Eerie black and white filming, unsettling battle sequences, and an atmospheric, moody story with McQueen at his anti-social, loner best.

Papillon (1973): McQueen and Dustin Hoffman play prisoners of the brutal French prison system in South America. McQueen is Henri Charriere, a thief sent away for killing a pimp. He struggles to adjust to the prison life, trying repeatedly to escape with little success. This is not a feel-good film, but it is an incredible watch, an exhausting one that wears on you as a viewer.

Baby, the Rain Must Fall (1965): An oddity for the King of Cool. A straight dramatic part as a country singer -- dubbed by someone else in the singing department -- trying to hit it big. McQueen is solid in an atypical part for him, Lee Remick more than holding her own as his alienated wife.

Bullitt (1968): One of McQueen's most iconic roles, Lt. Frank Bullitt, a tough San Francisco cop trying to find the killers of a witness meant to testify against the mob. A good example of a stylish, dramatic 1960s cop thriller. Underplayed and understated through much of the movie, it isn't particularly interested in story. This is about S-T-Y-L-E. McQueen is great, as is one of the most perfect car chases ever, two muscle cars beating the hell out of each other across San Fran. If McQueen was a cop, there'd be no crime.

The Magnificent Seven (1960): My favorite western of all-time with one of the most perfect tough-guy casts ever assembled. McQueen and Yul Brynner join Charles Bronson, James Coburn, Robert Vaughn, Brad Dexter, and Horst Buccholz as gunslingers hired to protect a poor Mexican farming village from a bandit (Eli Wallach) and his 40 bandits. Great script, great characters, memorable ending and Elmer Bernstein's instantly recognizable score ends up being an additional character.

Never So Few (1959): An early review that I've been meaning to update so be kind. An early supporting part -- a scene-stealing one at that -- for McQueen with Frank Sinatra, Richard Johnson, Charles Bronson, Peter Lawford and Dean Jones. Story is at its best when focusing on the guerilla fighting in Burma, not so much when dealing with Sinatra's love affair with Italian beauty Gina Lollogibrida.