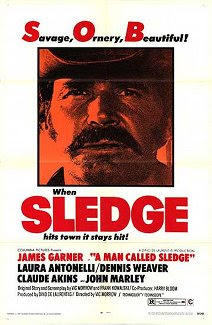 After a string of successful movies throughout the 60s but still a couple years away from the success of The Rockford Files, James Garner was at a bit of a crossroads in the early 1970s. He had a failed TV show that lasted only a season and a couple of movies that have pretty much been forgotten. In other words, ripe pickings for a review because I love one of them, an odd spaghetti western from 1970 called A Man Called Sledge.

With so many spaghetti westerns, what makes them a so-called 'spaghetti' is the style, but there's also the cast, crew, locations and of course, the financial backing. 'Sledge' is a bit of a departure from that successful formula with four American actors in the lead roles and a former American TV star as the director in Vic Morrow (who also makes a quick cameo). There's nothing really dynamic or different about 'Sledge' but it's an enjoyable enough western, and it's always interesting to see a 'good guy' actor take a crack at playing a villain as Garner does here.

After a botched stagecoach robbery, Luther Sledge (Garner) and his partner, Mallory (Tony Young), head for a saloon where Sledge meets his girlfriend, Ria (Laura Antonelli), and Mallory gets involved in a high-stakes card game. Mallory is killed for supposedly cheating after an impressive winning streak so Sledge is on his own and rides out to find the rest of the gang. On the trail though, he notices someone following him and ambushes him. It's a saddle bum known only as the Old Man (John Marley), and he's got a proposition for Sledge. A prisoner in the fortress prison nearby for 20 years, the Old Man knows all about the gold shipments stored in the prison from the local mine.

Hearing that as much as $300,000 is contained in each shipment, Sledge is instantly intrigued by the news. But there's a catch; the shipments are guarded by 40 heavily armed soldiers (Morrow is the mountain man looking guard in the lead) and a wagon-mounted gatling gun. At the first site of trouble, the 40 guards close up ranks and prepare to defend the gold. Sledge and his gang will almost assuredly be killed in any attempt so what can they do? Get at the gold on an inside job, as prisoners at the prison, so they won't have to worry about the professional guards picking them off. It doesn't really matter what the plan is, Sledge is going to get this gold one way or another.

My fascination with spaghetti westerns is rooted in the fact that more often that not, these Italian westerns are incredibly cynical with no obligation to force a happy ending on the viewer. Good guys are killed all the times, these aren't the invincible gunslingers too often present in American westerns. 'Sledge' is one of the darker, more cynical Italian westerns both in terms of subject matter and the ending. Using the Treasure of the Sierra Madre company line on gold -- Greed is not good, Gordon Gecko -- Sledge's gang is ready to turn on each other at a moment's notice if it helps them get their hands on the other members' gold. This not so subtle message is there from the start when Mallory gets killed for winning too much money and continues right till the end with betrayals and double crosses coming left and right.

This all comes to a head late in a climactic card game -- it's more exciting than it sounds -- as Sledge plays the Old Man for the gold. This sequence done in slow motion and close-ups is aided by a truly awful and even more awesome song called 'Other Men's Gold,' a very 70s jazzy tune. It's as cheesy as possible, and I love it. I defy you to watch this movie and not have it running through your head for at least a couple days. The score in general, composed by Gianni Ferrio, is not the typical western soundtrack, but it completely works in the context of the story.

For many movie fans, the reason to see this flick will be Garner starring as a bad guy. Compared to the rest of his gang, he's not that bad but it's all relative. Garner usually played some version of a charming rogue so it's nice to see him tackle a straight-up villainous part. He's aided by McCloud himself Dennis Weaver and western stalwart Claude Akins as Ward and Hooker, two of Sledge's gang. Marley is probably most well known for this scene, but he's also very good here as basically the devil himself, the gold-hungry Old Man. Antonelli is given little to do as Ria, Sledge's girl, but she looks great doing it. Some recognizable faces, mostly Italian actors, round out the supporting cast.

About as different a spaghetti western as you're going to find, A Man Called Sledge is not a classic or really even that good of a movie. It's very dark in the outlook it takes on men and greed and what they'll do for some easy cash. But from the start, it's entertaining throughout including a real downer of an ending that works for the characters and the story. And come on, it's James Garner as a bad guy, and look at that mustache! He has to be a good bad guy with that epic monstrosity on his lip. An interesting spaghetti western worth checking out if you stumble across it.