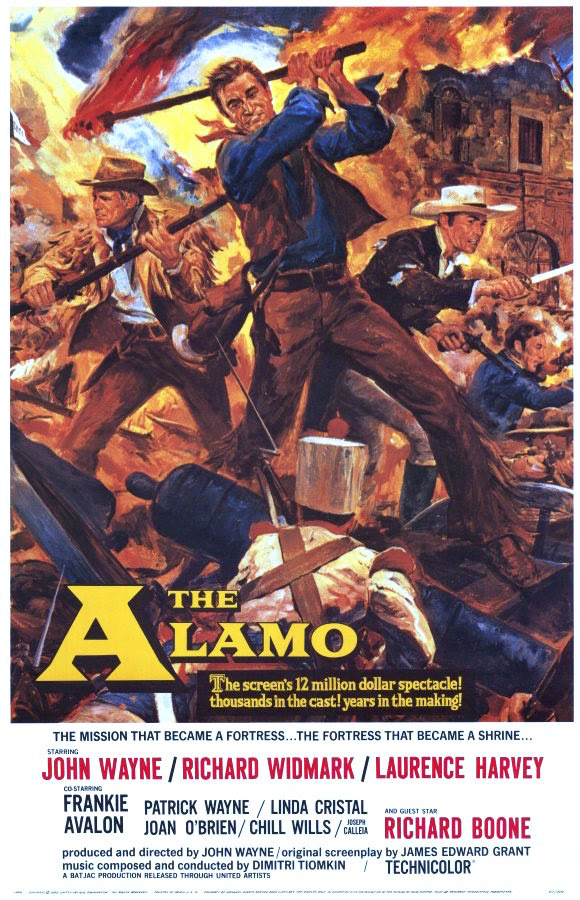 From the time I was introduced to Fess Parker as Davy Crockett in the Disney episodes, I fell hook, line and sinker for the story of the siege and fall of the Alamo. Even as a kid, I was able to appreciate the courage, the sheer bravery of the defenders of the mission who sacrificed themselves. But while I love the Disney Davy Crockett episodes, one thing stands above. Right alongside The Great Escape as my favorite movie, 1960's The Alamo.

It's February 1836 and the Mexican province of Texas is fighting for its freedom against Mexico and its dictator Antonio Lopez de Santa Anna. Leading the Texas revolutionaries is General Sam Houston (Richard Boone) who leads a nonexistent army and needs time to assemble and train a fighting force. In the town of San Antonio stands the Alamo, an old mission built by Franciscan monks over a 100 years earlier, a mission never intended for military use. With hopes of buying Houston the time he needs, Lt. Colonel William Travis (Laurence Harvey), knife-fighter and adventurer Jim Bowie (Richard Widmark), and famed frontiersman and former Congressman Davy Crockett (John Wayne) and 180-odd volunteers have forted up in the Alamo and are quickly surrounded by Santa Anna's army of over 7,000 men.

For star John Wayne, The Alamo was a labor of love, a film he had wanted to make for 14 years. He not only stars in it but also produced it and directed, his first ever film as a director. The story of the battle of the Alamo had long appealed to him -- the bravery, the heroism, the sacrifice -- and it was a story he wanted and needed to tell. He spared no expense in this truly epic production. In Bracketville, Texas, Wayne had a complete Alamo mission built, not to mention the town of San Antonio too in the middle of the Texas desert. The set -- dubbed Alamo Village -- becomes an additional character, adding a sense of realism and authenticity that no studio set would have done justice. The actual Alamo mission constructed is a sight to behold, a behemoth fortress that puts in perspective how difficult it would have been for 180 men to defend against an army of thousands. Wayne's love child, most will disagree with me, but I think it's a nearly perfect movie.

Playing three legendary figures, Wayne, Widmark and Harvey all deliver layered, nuanced performances, all of them unique and different from the rest. As Davy Crockett, Wayne is a huge presence. It's far from his best acting roles -- The Searchers, She Wore a Yellow Ribbon -- but Crockett of the time was a legend in his own right. Who better to play him than one of Hollywood's biggest stars? Much of the tension in the movie comes from the rivalry over command between Widmark's Bowie and Harvey's Travis, both actors representing themselves flawlessly. Widmark is fiery and hot-tempered, Harvey condescending, intelligent and an idealist, but they share a common goal. All differences aside, both men are willing to sacrifice themselves for the cause they're fighting. I love the banter, the back and forth, the chemistry among the three. Making a two-scene cameo as Houston, Boone too doesn't disappoint, making those two scenes more than just throwaway fluff.

In terms of actual screentime, the big three dominate, but as a director, Wayne assembled quite a cast. Ken Curtis plays Capt. Dickinson, Travis' second-in-command, with Joan O'Brien as his loyal, equally brave wife, Susannah. Crockett's Tennessee volunteers include singer Frankie Avalon as Smitty, the youngest Alamo defender, Chill Wills (in an Oscar-nominated turn) as Beekeeper, the drinking, jovial fighter, Denver Pyle as Thimblerig, the thinker and gambler, Hank Worden as the Parson, a preacher, with Chuck Roberson (a talented stunt man and Wayne's double) and Rudy Robbins as two unnamed Tennesseans, engaging in their running bit; 'Do that mean what I think it do?....It do.'  Other defenders include Patrick Wayne as Lt. Bonham, the Alamo's famous messenger, John Dierkes as Jocko and his blind wife, Nell (Veda Ann Borg), Joseph Calleia as Juan Seguin, and Guinn Williams as Lt. Finn, and Jack Pennick as Sgt. Lightfoot. Two other worthwhile performances include singer Jester Hairston as Jethro, Bowie's slave, and the lovely Linda Cristal as Flaca, a young woman who shares a brief relationship with Wayne's Crockett.

Anyone remotely familiar with the historical facts knows that on March 6, 1836, the Mexican army assaulted the Alamo and wiped out the defenders to a man in a brutal, bloody massacre; extreme casualties on both sides. For a first-time director, Wayne puts together one of the all-time great battle sequences ever committed to film (if not the best ever). Almost five full minutes are shown as the Mexican army marches into formation around the doomed mission, an eerie silence hanging in the air for several seconds before the attack begins. The assault features hundreds of extras -- and in one scene, thousands -- as the garrison tries to repel the soldiers from the walls only to be ultimately overwhelmed. Cavalry, infantry, artillery, this defines the SPECTACLE of an epic. More than that, it is a moving sequence, each of the defenders we've come to know meeting their death. More details later on this, but Dimitri Tiomkin's score here is some of his best work. You can watch the battle sequence HERE, but to be appreciated, see it on a large, large screen.

Wayne's film has its share of detractors, and the complaints are fair (even if I disagree with them). The original version is 192 minutes and has its slower moments. Speechifying abound from James Edward Grant's script, but I eat this stuff up. Big speeches about freedom, Republic, right and wrong. That's John Wayne at his best. What does work? The very real emotion of the movie. Countless scenes impact me the more I watch this movie. Travis addressing his men, knowing death awaits those who stay, is beautifully simple. Watch it HERE. I love too, that Crockett's men dismount before him. Overlooking a field covered with casualties, Pyle's Thimblering says 'Speaks well for a man who's willing to die because he believes right is on his side...speaks well.' The night before the final assault is the most effective though, the defenders sitting quietly as they wait for the inevitable in the morning. Bowie releases Jethro, but the former slave decides to stay and fight. Roberson's Tennessean delivers a simple monologue that is profound in its outlook on life. And best of all, Crockett is asked by Thimblering, "What are you thinking about?" to which Crockett answers "Not thinking....just remembering." The last 45 minutes features some of the most perfect dialogue, emotion, music and spectacle of any movie ever. The Green Leaves of Summer (listen HERE), one of the most beautiful songs ever, playing over this sends chills up and down my back at the thought of it.

A criticism of The Alamo is the complete lack of historical accuracy as pertaining to the actual 1836 battle, and that's true. Wayne never set out to do a spot-on, dead-on accurate telling of the story. The 2004 film -- The Alamo -- does that. Instead, Wayne wanted to tell the story honoring the men who fought and died. They fight because they believe in what they're fighting for. Surrounded on all sides with no hope of reinforcement, the Alamo defenders stay inside the walls, knowing certain death awaits. They go out fighting, go down swinging. That is what Wayne was going for. I have difficulty even processing that sort of heroism. Crockett's Tennesseans dismounting before him illustrates that. Crockett has seen some of his men die already and doesn't want to see anymore die, but his men don't look to him for a decision. They do it because they want to, not because they're told. Say what you want about Wayne as a director/star with a heavy-handed message, but he got that part right to a T.

Initial reviews were mixed for The Alamo, forcing Wayne to cut 30 minutes from his 192-minute long movie. Those cut portions include Intro Music, an Intermission and Entr' Acte, and Exit Music with about 15-20 minutes of scenes, some better than others. The scene that truly needed to be in the final print was Parson's death, a beyond moving, effective scene as the battle becomes very real for Crockett and his men. Watch it HERE. The actual prints of the 192-minute version seem lost to the ages, but many of the deleted scenes are available at Youtube. Watch several of them in one video, HERE. Among them is Scotty's death, and a birthday party held for Lisa Dickinson, played by Wayne's daughter Aissa. As a fan of the movie, it's great to see any of this footage.

So what else can I ramble about? That's probably enough. I love this movie and everything about it. Wayne gets the spirit right, showing the bravery and heroism of the Alamo defenders as they faced certain death and didn't shy away from it. A true epic with scale and spectacle to impress all moviegoers. Great cast, an amazing set of the Alamo mission, Tiomkin's phenomenal score, and a battle sequence that few can even approach in terms of quality. They don't make them like this anymore.