White Fang and the Hunter 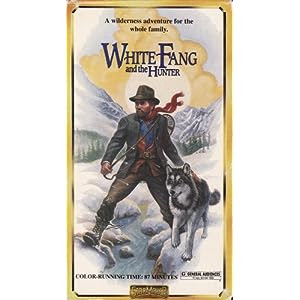 Like any successful genre, spaghetti westerns weren't always the most unique, original-idea producing movies. Go with what audiences want to see. Gunfights, epic anti-heroes, despicable villains, and often enough, combinations of characters thrown together into the same movie for no valid reason other than 'Eh, it'll be fun.' Then there's 1975's White Fang and the Hunter. A spaghetti western based off the Jack London novel? Oh, this should be interesting.

Traveling across the snow-covered Canadian(?) mountains, trapper Daniel (Robert Woods) and his loyal wolf-dog, White Fang (Habbash, yes, I'm providing a link to a dog), meet up with a heavily bearded hunter, Dollar (Ignazio Spalla), who would like nothing more than a good, stiff drink. Together the unlikely trio keeps on the move to the nearest town. It is run by a businessman, Ferguson (Claudio Undari), who owns everything with $ for his eyes. With the railroad coming to town, he's trying to scoop up as much land as possible, but a property owned by a young widow, Linda Burton (Malisa Longo), stands in his way, and she won't sell. Stepping in to help, Daniel, White Fang and Dollar aren't going to let Ferguson intimidate the widow out of what's hers.

Now 11 movies into the set of 44 spaghetti westerns I bought two Christmases back, I'm probably rocking about a 50 percent success rate. Two or three were pretty good, three or four were tolerable, and the rest? Well, I'll be kind and say 'Not good.' That's where 'White Fang' falls, right in that 'not good' territory. Is it even a spaghetti western? Yes, it is an Italian made movie with some familiar faces and a quirky musical score, but I wouldn't say it is a spaghetti western in the traditional sense. Some of the issue here -- fair or unfair -- is that the print of this movie was pretty awful. Pan-n-scan where we don't even see the faces of the people talking as we watch a blank screen. Daniel kisses Linda at one point, and the camera swerves to actually get them in frame. That's just solid work. Kudos to the editors on that.

Because this movie was generally pretty awful, I won't be seeking it out, but it was apparently part of a double feature of sorts, starting two years prior with White Fang and the Gold Diggers. As I've mentioned, cheap is one thing -- it can be a positive in a film -- but there has to be something redeeming about that low budget quality. The acting is uniformly bad, and it features some of the worst dubbing I've ever seen. The worst example is Linda's son, Johnny (Massimo De Cecco in one of his two career roles), who for all we know could be a great actor. What we hear though is a shrill, screeching voice that sounds like nails on a chalkboard every time he speaks. Sorry, kid. It's hard to judge a film based off a bad dubbing, but it is especially notable here. The snow-bound setting is cool if for nothing else than a change of pace from the sand-swept deserts, but even then, the DVD print makes it look like indecipherable clouds. Eh, actually seeing the movie is overrated, right?

What else to criticize? I guess we can talk about the acting. An American actor who found a niche in the European market, Woods is given little to do as the "hero." He walks around a lot with White Fang, meets Dollar, gets into some fistfights, and woos Linda because the story requires something to happen. To quote Seth Rogen's coining the term, his "Jew-fro" looks a tad out of place too. Spalla does what he did best in the Sabata trilogy, mug for the camera, overact, and drink a ton of whiskey. Where there was some charm in the Sabata movies, the attempts at humor fall flat here for him as he tries to woo an Indian woman, Luna (Linda Sini), who can similarly drink a whole lot of booze. Undari is a pretty standard weak villain, not imposing or intimidating in the least although his main sidekick and henchman, Mr. Slider (Franco Lantieri, I think?), could have the coolest name ever.These villains shoot dogs by the way. Any question they're killed gruesomely?

Meandering along for 89 minutes without much going on, 'White Fang' just doesn't have much going for it. The link below will include a brief sample of a whistle-worthy theme (definitely out of place, catchy nonetheless). Daniel and Dollar do have a cool scene with a small army of wolves attacking them, and a late brawling fistfight is cool. Really though? There's no link at all to London's works or characters other than the fact he did write about a bad-ass wolf-dog. The sad thing though is that White Fang is the coolest character here. During that fistfight, he removes the pistols from all the thugs' belts and piles them nicely behind the bar out of harm's way. Earlier, he wipes his paws before entering a bar because he's seen Daniel do the same. This movie was bad, no doubt about it. An 89-minute movie following White Fang around and not the semi-handicapped humans? I'd watch that one. The link below is the movie condensed into 10 minutes.