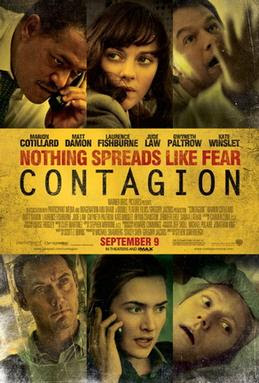 For a lack of a better description or word choice, there are a lot of hack directors currently working in Hollywood. No real specialty or ability, they point the camera and let things take care of themselves. Steven Soderbergh? He ain't one of those talents. I come away more impressed with each film he directs, including one of his most recent ventures, 2011's Contagion.

After visiting Hong Kong on business, Beth Emhoff (Gwyneth Paltrow) returns home to her husband, Mitch (Matt Damon), and isn't feeling quite well, thinking she picked up a bug along her travels. The next morning she drops dead after going through a series of violent seizures. Mitch doesn't believe what he hears, claiming she was fine just minutes and hours before. It wasn't just Beth though. Something else is going along in various cities, regions and countries around the world. People are dropping dead with a variety of symptoms, a disease that the medical community can't quite pinpoint. The death toll grows and grows with each day. What is this new virus? Can it be stopped in time?

This is not an easy film to review, mostly because it isn't a film that's trying to entertain you. In a lot of ways, it reminded me of the wave of big budget disaster movies that hit theaters in the 1960s and 1970s. All-star cast in a perilous situation, who will survive? I guess it's appropriate that a 2010s version isn't an ocean liner overturning or a jet airliner struggling to stay in the air. Instead, we get a smart, well-written pseudo-documentary/medical thriller that seems more relevant in our time than any old disaster movie. Mostly though, it's not a movie you come away from thinking 'Man, that was great.' I finished it thinking 'Great movie, and a well-made one' but great? I don't think it wants to be great. It's content to be different from the norm, and I always give points for that effort.

That's where Soderbergh's film succeeds on so many levels. Yes, it is a feature film, but it feels very real from the start. Some of the director's touches are there -- title cards introducing locales and background -- but it is a very self conscious film for a 2011 audience. News spreads like wildfire of this new disease, Facebook, Twitter, and the Internet in general going crazy. News turns into rumors, rumors turn into chaos, and then it's the individual for himself. A condemnation of our society? Yeah, a little, but it isn't heavy-handed or forced. Instead, it's probably spot on in its portrayal of how our modern society would react in this situation. When survival is on the line, rioting, stealing, killing, everything becomes blurry. Where do you draw the line then as what's too far? Kudos to Soderbergh for handling the situation so smoothly and even effortlessly at times. Just one more sign of a very talented individual behind the camera.

His cast assembled here is an impressive one, starting with Damon as Mitch, a widowed husband trying to protect his daughter (Anna Jacoby-Heron) from something he can't see. It is an ensemble cast with pretty equal screen-time divided among the group, but Damon's Mitch is the most personal of the stories. Damon as always is very likable on-screen, especially when fighting for his daughter. And you know you're in for it when a big name like Paltrow is dead 10 minutes in. Oops, "spoilers" I guess. Laurence Fishburne and Kate Winslet play doctors at the Center for Disease Control (CDC), Fishburne working from headquarters, Winslet in the field trying to isolate the virus. Jude Law is perfectly slimy as a blogger with quite a following and therefore, a whole lot of power at his disposal. The beautiful Marion Cotillard humanizes a small part as a World Health Organization (WHO) doctor trying to find the source of the virus in Hong Kong. Jennifer Ehle is also very good as Dr. Hextall, a scientist/doctor working diligently to try and find a vaccine. Also look for Elliott Gould, Bryan Cranston, Enrico Colantoni and John Hawkes in small but important supporting parts.

With so many characters and storylines, 'Contagion' does bounce around quite a lot, but it never loses track of where it's going. Title cards show the day and location so we get a sense of how quick the virus is moving, the cells reproducing quicker and quicker. We learn what the virus is as the characters do. The movie has a very distinct look, colors filtered and washed out, the impending doom hanging in the air. Cliff Martinez's score is a gem, part electronic, part synthesized like so many solid Tangerine Dream scores. Listen to track one HERE and follow along with the other links for a taste of it. These are the elements that are easier to critique, but the movie on the whole is well worth recommending.

Don't be confused heading into Contagion. It is an at times very disturbing, highly upsetting story. It isn't always an "easy" movie to watch. Know what you're getting into, and I imagine you'll appreciate it more than if you thought were getting some glossy, superficial medical thriller. It feels based in reality, like this could easily happen to us in our current, modern society. And I'll bet you something. If you weren't a germaphobe before, you will be now. Washing your hands, not touching anything, not touching your face, all the little things I took away and have been on my mind since. A movie well worth checking out.