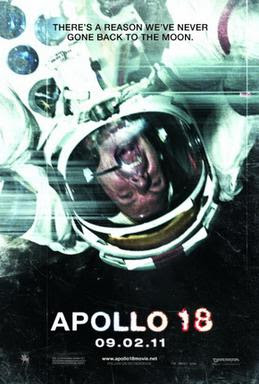 A recent trend that is hopefully nearing its successful run is the found footage genre. It includes movies like Blair Witch, Cloverfield, and the Paranormal Activity series; stories that are completely told from footage found after the fact. Lots of shaky-cam, security cameras, motion-sensing cameras, garbage like that. The premise in itself is appealing with a ton of potential, but used repeatedly, one film after another? Everything has it's limit. Take 2011's Apollo 18 for example. Great trailer, great premise....and that's it.

The Apollo Space Program was run by NASA between 1961 and 1972, and is most well-known for landing the first man on the moon in 1969. They're also known for their failures, including the Apollo 1 accident that claimed the lives of all three astronauts, as well as Apollo 13 when three crew members barely made it back to Earth after an in-flight malfunction. History says the program stopped after Apollo 17 in 1972, but conspiracy theorists have long theorized about an additional flight, Apollo 18, one that NASA fully denies. What if something horrific happened, something NASA didn't want released to the general public? Cue the found footage.

It's 1974 and three astronauts in the Apollo space program are more than a little surprised when they get news that they're needed for an upcoming flight, Apollo 18. Astronauts John Grey (Ryan Robbins), Nate Walker (Lloyd Owen), and Ben Anderson (Warren Christie) are tasked with traveling to the moon and placing new technology and equipment there that will be used in conjunction with a missile defense system in case of a Russian attack. Nate and Ben head down to the surface of the moon while John keeps tabs on them from several thousand feet up. Their mission starts off easily enough, but something isn't quite right. They find tracks all over the surface, their equipment seems to be tampered with, and evidence of an unheard of Russian landing is everywhere. What weren't they told?

Part Cloverfield, part Paranormal Activity (you pick which one), Apollo 18 is dripping with potential. Where does it succeed? Director Gonzalo Lopez-Gallego succeeds in making a genuinely creepy, unsettling and moody sci-fi horror flick. There aren't many 'Gotcha!' moments, 'Apollo' succeeding on a more subtle level. The Moon/space setting obviously helps. Some 200,000-plus miles from Earth, you're completely on your own. Anything....anything...can happen to you, and no one is there to rescue you. Space is a big old place, hiding all kinds of secrets and possibilities. Anything and/or anyone could be waiting out there, something we have no ability to even process. That's where 'Apollo' lives up to its potential. It sets the mood right away and is genuinely creepy right until the very end.

The problem comes from a bunch of different reasons, some worse than others. Let's start with the found footage angle. The whole premise relies on something bad happening, otherwise how was the footage just found? There were no witnesses, only the cameras that were rolling that caught the incident on film. While this found footage angle adds an element to the story, it also limits it. The grainy, fuzzy 1970s camera techniques get old quickly. It becomes tedious watching the astronauts from the same two or three angles where cameras have been installed on their lunar landing module. I get it. Found footage makes it seem real, like maybe...just maybe, it really happened.  What's wrong with a straight story with regular cameras? You can still make it on a low-budget with that underlying sense of doom. A "real movie" doesn't have to be obvious or aggressively in your face. Good and bad here, disappointing when the premise had the potential for being great.

Here we are again at my Christmas Eve theory. Is it more fun not knowing what your presents are or finding out in the morning? Do you want to know what's actually going on to these astronauts? Is there something else living on the Moon? Any movie is in a lose-lose situation. You will never appease every fan everywhere. SPOILERS STOP READING SPOILERS So what's actually up on the moon? Apollo 18 visits the south pole on the Moon, an area unexplored previously. Deep in impact craters are boring old moon rocks....almost. They end up being chittering spider/crab rocks that get into your body and infect you. Okay, for one, that's cool. Very, very creepy. Instead of having Predator-like, guns-blazing aliens, we get something different. Kudos to Apollo 18. In keeping it edgy and mysterious though, we don't get enough of these parasitic, virus-causing aliens. I realize if they went too far and showed them, I'd probably complain they looked fake so yes, I'm a hypocrite.

That's what killed me. There was so much potential in that aspect. The astronauts pick up seemingly harmless moon rocks, but instead they're some sort of alien life waiting to strike. It's original. But there needed to be more, not in the way of explanation -- mystery can be a good thing -- but just a more visual alien life. One effective deleted scene showed them in more detail that couldn't have hurt the finished product. Onto other things, like how this found footage was....well...how it was found. All the astronauts die, none making it back, the spaceships exploding in space. How did the footage get back then? Your guess is as good as mine. END OF SPOILERS KEEP ON READING

The acting here with only three prominent speaking roles are more necessary than anything. No personal development or characterization -- and that's fine, it would just feel forced -- as we see the trio of astronauts interacting. Christie especially stands out though, including most of the last 30 minutes as Control back in Houston stuns him with a revelation about their mission. The realization of what's told to him is a great scene. Owen's Walker has some especially creepy moments, Robbins' John the odd man out, confused as anyone about what's happening below him on the Moon. So mostly I'm disappointed with the movie. I typically think the whole found footage idea is wasted, but this one had a ton of genuine potential. Still worth watching for what could have been.