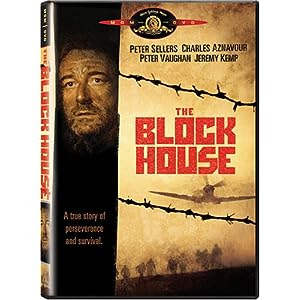 Peter Sellers was an actor first and foremost. Many say doing comedy is much more difficult than drama, and Sellers was certainly known more as a comedic actor than anything. Could he do dramatic roles? There aren't a whole lot of options to test the theory, but we can start with 1973's The Blockhouse.

It's June 6, 1944 and somewhere along the French coast a camp of forced laborers comes under fire from a naval bombardment. In the chaos that follows, seven such laborers (including Sellers as Frenchman Roquet) escape into a heavily fortified bunker. They retreat inside and down possibly hundreds of feet, a blast sealing off their only exit. The good news? The bunker deep underground was stocked to feed an army with tons of food, wine and supplies at their disposal. The bad news? They're well-supplied, but there's no way out and no real hope of rescue. The seven prepare for what could be a long stay.

This is a difficult movie to review for a couple different reasons. For one, it's based on a supposed true story and isn't exactly intended as a film you enjoy. You appreciate it more than anything...if that makes sense. From director Clive Rees, 'Blockhouse' uses WWII as a jumping off point, but it's not essential the setting. The need, fight and struggle to survive is the key. The D-Day intro grounds the story with a nice touch, but it's not a necessary one. It is a dark movie -- visually and in storytelling -- with a dread of claustrophobia and impending death hanging in the air. Everything from the drab colors to the mumbled dialogue sets things in motion. The film opens with an intro 'This is the true story of 7 men....details....only 2 would survive.' Not talking happy-go-lucky now, are we?

And now back to the intro, Sellers as a dramatic actor. Yes, the Pink Panther star can most definitely act in a dramatic roles. I'll go into more details later because all the parts are uniformly above average, but Sellers and co-star Jeremy Kemp are the unquestioned stars here. None of the parts are loud, showy roles with a minimum on theatrics and exaggerated moments. These are men slowly wasting away in this almost apocalyptic situation. Sellers is a surprise choice -- only his 2nd purely dramatic role -- but he doesn't disappoint. His Roquet is soft-spoken but highly intelligent, becoming an unofficial leader among the group and someone the others look up to. He tries his best to maintain his own sanity while preserving that of the others at the same time. His last scene is an especially moving one.

Rounding out the other six are some recognizable faces if not quite the huge names. I especially liked Kemp as Grabinski, the other intellectual in the group who finds an equal in Roquet. The others include Kramer (Nicholas Jones) and Visconti (Charles Aznavour), both reveling in stories of past conquests, Lund (Per Oscarsson), a quiet man who's the only one trying to aid their cause by breaking out some how and some way, Aufret (Peter Vaughan), the laborer who worked with the Germans as a prisoner overseer, and Khozek (Leon Lissek), the somewhat slow but genuinely good Eastern European. Because it's a very personal, even unsettling movie, it's nearly impossible not to root for these guys at least a little bit. Still, even a little personal background would have been nice. Does it detract from the very pointed survival message? Maybe, but I think it would have ultimately helped.

This is a story though not interested in the bigger picture of WWII or even keeping us as viewers up to the minute on every little detail of the ordeal. By the second or third scene, we've lost all track of time. Have these men been there for days, weeks, months? They don't know. In all its darkness though, 'Blockhouse' has some great, memorable moments. A teacher, Sellers' Roquet covers the walls with poems and quotes from literature. Roquet and Grabinski play chess in a one-sided affair, later arguing over switching to dominoes. A bike is found in the storerooms, the trapped residents reveling in having some fun. A "Christmas party" takes a turn for the worse after the saddest version of Silent Night you've ever heard. These little moments help humanize the story in ways I wouldn't have thought of, but the movie's the better for it.

So how to review this in the end? I'm not sure. Because the ordeal isn't the most exciting thing, the story itself is a tad sluggish at times. Necessary, even realistic to the real-life story? I'd assume so, but visually it isn't the most interesting movie to watch. The characters are literature archetypes more than flesh and blood human beings. Striving for survival is mankind at his most simplest though, and while it is an incredibly difficult movie to watch at times, it is worthwhile for at least one viewing.