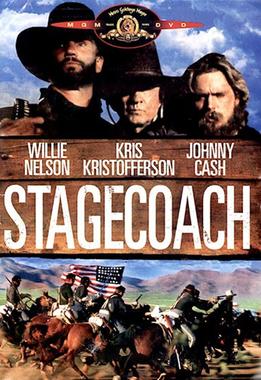 Released in 1939, John Ford's Stagecoach is one of the all-time great westerns. It was hugely influential in countless westerns that followed, and of course, is famous for helping make John Wayne a huge star, one of the biggest movie stars of all-time. So what's the biggest form of flattery? A remake! And unnecessary ones! Ford's western has been remade twice, first in 1966, and with today's review, a 1986 TV western, Stagecoach.

In the small town of Tonto, a stagecoach is set to leave and keeps its schedule in making it to its next stop in Lordsburg. It is far from an easy ride though across the desert, especially when reports of Geronimo and his Apache warriors being on the warpath start to hit the town. An already dangerous ride is that much worse. The driver, Buck (John Schneider), intends to do his job though, taking the coach through, Apaches be damned. So with a full coach of passengers, Buck leaves Tonto with a cavalry escort hoping to avoid Geronimo and his warriors. His passengers, all of them, have reasons to undertake such a dangerous trip. Some are trying to get somewhere while others are simply trying to get away, but to a person, they believe they're right. Are they? Can they get to Lordsburg safely without coming under attack?

Okay, No. 1. Something that needs to be said. There's no reason to remake Ford's film. NO reason. It's about as perfect a western as you'll find out there. So to remake it in different formats twice? Unnecessary to say the least. I haven't seen the 1966 version -- I'd like to, the cast is pretty crazy -- but I feel safe saying the original is better. The same here. Why bother remaking a movie that didn't need to be remade? Well, the answer isn't one you might easily come up with.

Any ideas? This TV western actually puts a country music spin on the original formula! Didn't see that one coming now, did you?!? The cast includes Johnny Cash, Willie Nelson, Waylon Jennings and Kris Kristofferson in major roles. Now even as a non-country music fan, that's an impressive pairing of talent! The biggest difference between the '86 TV flick and the '39 original is the re-working of certain characters so the Big 4 Country Stars are actually given something to do. Cash is Marshal Curly Wilcox, on the hunt for Kristofferson's Ringo Kid, with Nelson as the Doc Holliday (quite the change!), and Jennings as Hatfield, a talented gambler (some would say cheater) looking for some redemption. Take the original characters/story, add country stars, lather, rinse and repeat and you definitely get some tweaked stories! That's not a bad thing, giving a refreshing new look at a familiar story.

Of the four, I thought Cash and Nelson come out the best. Cash isn't the greatest actor, but he's very natural, and his scenes with John Schneider's Buck are excellent, two experienced trailhands discussing what their best plan is and should be. Nelson too is excellent as maybe the most famous dentist ever, Doc Holliday (not any old Doc like the Ford version), philosophizing and smoking a cigar and generally having a good time. Obviously he's having some fun with the part. Jennings is okay as Hatfield but nothing crazy. I'm a big Kristofferson fan, but it's a bit of bad casting here. Maybe it's because John Wayne's take on Ringo is so iconic, but Kristofferson is too old for the part and his scenes with Dallas (Elizabeth Ashley), an aging, disillusioned prostitute, lack some chemistry. It kinda feels like a western Last Vegas or Grumpy Old Men, four aging stars getting together and having some fun. Nothing wrong with that, right?

Who else to look for on the crowded stagecoach? Also look for the always welcome Tony Franciosa as Gatewood, a corrupt banker getting out of town with his bank's latest deposit (some $30,000), Anthony Newley as Peacock, a traveling whiskey salesman, and Mary Crosby as Lucy Mallory, a very pregnant young woman traveling west to meet up with her husband, a cavalry officer.

So while there are some changes along the way -- some major, some not as significant -- mostly this TV western sticks with the original's story. The soundtrack isn't entirely country (featuring some solid uses of guitar), and the locations are solid but don't register like Monument Valley does -- I know! Go figure in that department. The biggest changes are saved for the end in a finale that feels somewhat disjointed and/or rushed. It's not an especially good flick, but it is entertaining from beginning to end. The novelty of the country casting is just enough to give it a recommendation. It ain't on par with the 1939 original, but few are. Still....it's not bad.