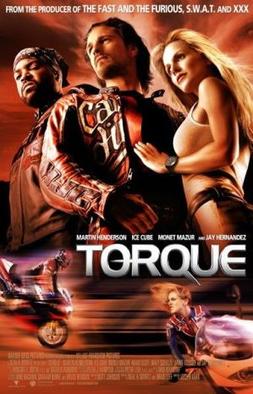 You probably know the face if not the name. I first was aware of Martin Henderson in 2006's Flyboys with his scene-stealing part as a veteran World War pilot. He's been working regularly since the early 2000's but never became a bigger star despite some strong appearances. He's a welcome face whenever he pops up in a movie for me! The reason for that lack of stardom? Maybe it's the choices of roles, like 2004's Torque, an awful but highly entertaining action flick.

After six months of hiding out in Thailand, a biker named Ford (Henderson) has returned to the United States with a mission; he wants to clear his name of an unsolved crime concerning drug possession. There's a problem though. A lot more unsavory folks than the police and authorities are interesting in tracking him down, including two brutal biker gangs, the Hellions, led by Henry Davis (Matt Schulze), and the Reapers, led by Trey (Ice Cube). While threading the needle among all those in pursuit, Ford tracks down his ex-girlfriend, Shane (Monet Mazur), who he left with so much unresolved when he hightailed it out of the states six months prior. Time is running out though so Ford teams up with two old friends of his -- wouldn't you know...they're both bikers too! -- in hopes of clearing his name and getting out of it alive at the same time. Can he pull it off?

What a profoundly dumb, truly stupid movie. So....yeah, it's entertaining though. Really entertaining. So bad it's so freakishly good entertaining. From director Joseph Kahn, 'Torque' is in the vein of the Fast and Furious series, especially the first two entries in the series before it got legitimately good, not guilty pleasure good. There is the thinnest, almost see-through impression of a cliched story to hold things together. Those things? Cool anti-hero, wisecracking sidekicks, beautiful, sexy and scorned ex-girlfriend, horrifically cliched bad guys (* Check that. Horrifically cliched everything), and then throw in liberal doses of crazy action, stupid stunts and good-looking women. Every once in a while you need an entertaining dud like this.

There's plenty of familiar faces around, most of them here to look 1. Cool 2. Tough and/or 3. Sexy. Some are more successful than others. Ice Cube hams it up like a crazy person as Trey, hardass leader of the Reapers with Faizon Love as his much-maligned SUV driver. Schulze actually passes Mr. Cube in the ham department as Henry, but he's not nearly as over-the-top as he was in the awful and far-less entertaining The Transporter. Look for Max Beesley as his right-hand man/enforcer and Jaime Pressly as his tatted-up, piercing obsessed sexpot girlfriend. Adam Scott has some fun as an FBI agent on the case with Justina Machado as his partner. Oh, and Dane Cook makes an odd appearance as comic relief that doesn't quite work.

The weird thing? For the most part, I enjoyed this action-heavy, style-trip through the roguish biker world as it embraces all the craziness that's on display. It's only in the last 20 minutes as our action-packed finale comes along that things truly fall apart. All those separate ingredients mix together in a horrific explosion that's too much for a movie that's entirely too much. The editing is so quick with absolutely no transitions that it is impossible to actually see what's going on. Not to understand what's going on. To see it. It's that fast. And there's product placement. Seriously...there's Product Placement as Mazur's Shane and Pressly's China face off with Pepsi and Mountain Drew posters displayed behind them. They pose and let the camera linger on those posters. SEVERAL FREAKING TIMES. Come on, that's a little much even for a dud like this.

Still, it is blindingly, stupidly fun. There are some cool biker stunts in a story that's just 80 minutes long. It's 84 minutes with the credits. One chase between Ford and Trey is the best as a high-speed train cutting across the desert becomes a prop to their motorcycle craziness. That's where this movie works, in the old "Turn Off Your Brain" department. Watch the pretty people do impossible stunts on cool bikes. Oh so awful but a hell of an entertaining trainwreck.

Oh, and it's hilarious that Torque actually makes fun of the Fast and Furious movies. Nothing this bad -- however entertaining -- should have the balls to criticize any other movie.