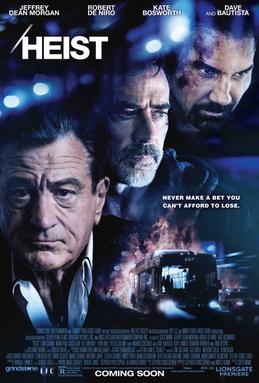 I've realized something these last few years as I've headed head first into old age. Yep, I'm 30 now. It's all downhill, huh? I went through a long phase where I was always looking for critical darlings, movies -- check that, films -- that were blah blah blah. I want to be entertained. Plain and simple. Therefore....2015's Heist is pretty dumb and even pretty bad, but 30-year old me was entertained and enjoyed it from beginning to end, dumb twists and all.

A dealer at a riverboat casino in the South, Luke Vaughn (Jeffrey Dean Morgan) is in trouble. His young daughter is sick and wasting away in a hospital, desperately waiting a surgery he can't afford. He has nowhere to turn other than his brutally efficient boss, Frank Pope (Robert De Niro), the owner of the casino, he has a history with...but is turned down. With nowhere left to turn, Luke agrees to work with a pit boss, Jason Cox (Dave Bautista), to take down the casino and remove some of its dirty money. It's a desperate plan that comes together quickly, but Luke has no other options and Cox wants and needs that cash (because he's greedy...nothing more sinister). The job itself goes awry almost immediately after they get their hands on the money, forcing Luke, Cox and two men Cox is working with to improvise under heavy gunfire. What to do? Where to go?

I love going to the movies. I love watching movies. What I'm still getting used to with that love? There are a lot of movies out there that never got a theatrical release and went straight to DVD/Blu-Ray, like this action thriller from director Scott Mann. Were they meant to be released in theaters only to see a studio back out? I'm still working on it. Seriously, check out Redbox or Netflix and see all these like-minded flicks. Usually some cool casts, interesting premises and...a dud of a movie!

This movie has a lot of potential, much of it coming from a very cool cast. The premise is pretty cool even if it doesn't always take advantage of that premise. There are plotholes so freaking big you could probably drive a semi-truck through them without any collateral damage. It's fairly predictable though it tries to reveal its big twists as HUGE REVEALS. The status quo for these straight-to-DVD flicks seems to be stories that fall apart in the finale, but hopefully by then you're at least partially invested enough that you don't audibly groan. Okay, I did a little bit here but that's my twist with the big reveal. Yes, 'Heist' is cliched, predictable and quite familiar if you've seen any -- ANY -- previous heist thrillers, but I did enjoy it. All those above descriptions aren't necessarily a movie killer as long as things stay entertaining.

Most of my enjoyment came from the casting. I wish Jeffrey Dean Morgan did more action movies that let him play these kinda roguish anti-heroes. I loved him in The Losers, liked him a lot back in '15 in Texas Rising, and he's good here as an unlikely crook who turns to a casino robbery to save his daughter. A little hammy (okay, very hammy, aiming right at the heartstrings), but it works with all the other craziness. As for that De Niro fella, maybe you've heard of him. He's a decent actor. Even when the script is nothing crazy and does him no favors, De Niro looks to be having fun, especially with the villainous Pope, a casino owner who watches over his money like a murdering mama bear. Likable stars can make just about anything worthwhile, and that's the case here. Well, at least the start of something.

There's a fun cast overall here, most of them playing characters that are either cliched stereotypes or cardboard cutouts, but it's fun to see the parts just the same. A former wrestler who's burst onto the movie scene with roles in Guardians of the Galaxy and Spectre, Bautista is quite an intimidating presences as the brutal co-conspirator. Also look for former MMA fighter Gina Carano as a police officer thrust into the situation, Mark-Paul Gosselaar as a fast-talking, no-nonsense detective, Kate Bosworth appearing in one scene as Pope's estranged daughter, and then D.B. Sweeney and Lydia Hull as unwilling participants in the post-heist aftermath. And last but not least, having some fun as a sadistic enforcer of Pope's and his casino heir, Morris Chestnut plays Derrick 'The Dog' Prince.' A fun cast with some cool faces to see pop up.

Not an especially good movie, but definitely an entertaining one. Don't go in with too high of expectations, and I think you'll get a kick out of it too.