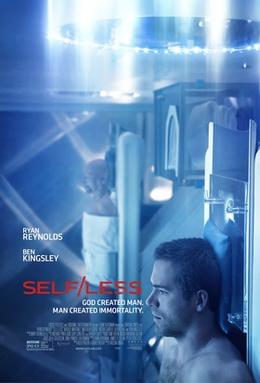 So....mortality....kinda sucks, huh? We only get one crack at this life so you might as well make the best of it with what little time we have, right? Well, what if we weren't limited to just one go-around? What if we had another chance, maybe multiple chances? It's a potential-filled dilemma, one with countless layers. If we could, should we? I missed 2015's Self/less in theaters but was able to catch up with it on DVD.

A real estate mogul who has piled up fortunes on top of fortunes in a career spanning 40-plus years, Damian Hale (Ben Kingsley) is quickly dying of cancer that is spreading throughout his body. With doctors telling him he only has months to live, Damian undergoes a dangerous medical situation called 'shedding' where his mind/psyche are transported to the body of a much younger man, a body grown/built genetically in a lab. So while his body may have failed him, his mind won't, giving him a chance to live on and accomplish so much more as a younger version of himself (Ryan Reynolds). New and improved Damian dives into his new-found life, celebrating, partying and living life like he was actually running out of time. It all seems too perfect...and it is. Damian begins to feel funny, begins to question exactly what's happened. Can he figure it all out before something even more dangerous happens to him?

Ever heard of a movie called Seconds? Ha, well I have! I even reviewed it for you! You can read my review from 2010 HERE. It's got 6 whopping views so...yeah, it's a threat to go viral any second. 'Self/less' is a tweaked remake of the 1966 flick from director John Frankenheimer and starring Rock Hudson. It's a very 1960's movie with a fabulous ending, one that almost saved the movie for me. But that's my rule. If you're going to remake a movie, do one that has little to no reputation or has a ton of untapped potential. This version? It takes the basic premise and goes from there, doing its own thing.

What if you weren't tied to your physical being? What if your conscious could be moved to another vessel? In this frightening age of science, who knows? Maybe that's not too far away...if it hasn't happened already. Director Tarsem Singh turns in an unsettling, creepy thriller with that potential-filled premise. It received pretty negative reviews -- although fans seem to like it -- and bombed at the box office, making just $12 million. Not good. I liked it though, taking the remake and stylizing it and building up some great scenes of doom. It moves at a lightning-pace early on once Damian goes under the procedure, and I wish it would have slowed down a little bit, let it breathe and develop. It's always entertaining though and worth a watch.

This Ryan Reynolds fella, he's been in the news lately for a little movie called Deadpool. Heard of it? Yeah, it's doing pretty well in theaters. He's always been an immensely watchable actor through drama or comedy, but his HUGE movie never seemed to come along until Deadpool. As young Damian, Reynolds is us, he's the viewer. He's trying to piece it all together, knowing the pieces just don't quite fit...but not quite able to figure out why. I'll always think of Reynolds as motor-mouth, fast-talking Van Wilder, but he's shown previously and does it again here that he's quite capable of heavier drama into anti-hero territory. A very solid lead performance!

Now officially into badass, screen legend territory, Kingsley has some fun and gives the film some muscle early on as older Damian, a ruthless businessman who sees his clock running out. Just wish he'd been around longer! The always-solid Matthew Goode plays Albright, the suspiciously smooth doctor who offers the seemingly-dangerous medical procedure that moves psyches without too much risk. Victor Garber is a welcome addition as one of Damian's business partners and friend, making key appearances at the beginning and end. As for the rest of the cast, I don't want to give away too much about what's going on so...look for Natalie Martinez and Derek Luke in key supporting parts!

My theory I write about often is my Christmas Eve theory. Sometimes it's more fun not to know what your presents are. The build-up, the anticipation! 'Self/less' is a rare movie where the payoff works. So does the build-up. The mystery and all those unanswered questions do a great job building the tension as young Damian begins to figure out exactly what's happened. My biggest issue is that 'Self/less' didn't know how to wrap things up. The last 25 minutes or so degenerate into unnecessary action pyrotechnics with car chases (that's actually pretty cool) and a chase and gunfight. I liked that simmering tension and unease through the first 80 minutes more. So thankfully, my issues aren't deal-breakers. An enjoyable thriller with a cool premise and good cast. Worth a watch for sure.