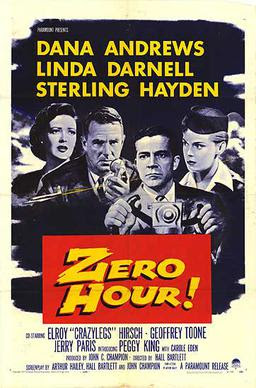 As a stand-alone film, 1957's Zero Hour! has no real business being remembered as anything but a pretty bad B-movie full of wooden acting and poorly-made effects. Now, it's not exactly a well-known, fan favorite some 50-plus years later, but it does have a certain claim to fame. It is the source for one of the all-time great spoofs, 1980's classic Airplane! On that tidbit of trivia alone, this is a movie worth a watch....once.

It's been ten years since the end of WWII, but former fighter pilot Ted Stryker (Dana Andrews) still struggles with a command decision that cost the lives of several members of his squadron. He's been bouncing from job to job, and his wife, Ellen (Linda Darnell), is threatening to leave him. Returning from a job interview, Ted finds that Ellen has taken their son, Joey, and has left him. He tracks them down, buys a ticket on their plane with hopes of winning her back. The odds are against him though. Something happens to both the pilot and co-pilot, forcing the air crew to ask if anyone on-board can fly a plane. With some 40-odd lives at stake, can Ted pull it together and land the plane?

It's been years since I've seen Airplane! but it's hard to watch the 1957 movie without cracking up at the very premise. Maybe back in the 1950s this was looked at as a solid, entertaining thrill-ride, but now? It plays like a spoof of itself. It's high drama on steroids! The acting is atrocious -- Darnell yelling and screaming 'MOUNTAINS!' is priceless -- and you can't help but wonder why it took 23 years to make a spoof of this flick. It was ripe for the picking, and when given the chance, the 1980 spoof classic did not disappoint in the least. Robert Hays' character is even named Ted Striker, "I" instead of "Y' in this case.

What amused me is that the situation -- a passenger forced to fly the plane -- is dripping with natural tension. Anyone who's ever gotten on a plane has at least briefly thought about the possibility. If not flying the plane, at least something out of the ordinary happening. So right off the bat, there is that tension watching the movie. You're thousands of feet up in the air, and your life depends on some schlub taken from his seat to fly an airliner? So yes, there is some excitement in the movie. But there is too much working against it. Besides the main cast, it appears they picked people off the street to read lines. At different points, you can see cast members apparently looking off screen to read cue cards. The music is blaring at you in the most obvious of fashion -- DUN DUN DUH!!!!! -- that something bad is going to happen, and we see the same effects repeatedly of the plane flying through fog, clouds and rain.

So here's the situation. You've got a former fighter pilot in a life and death situation being talked down by a airliner pilot who used to fly with him and still holds a grudge. How about we pick two of the most wooden, nondescript actors to play those parts? It's a story that literally revolves around life and death. It sounds like logical thinking, don't you think? God bless them both, but Andrews and Sterling Hayden were not good choices for these parts. Andrews was a likable enough actor on screen, but he's not one to carry a movie. Hayden as Captain Martin Treleaven, the on-the-ground link to the possibly doomed plane, is an equally poor choice. Basically no matter the part, Hayden had one pitch to his voice; deep and stilted, no real emotion. So when he's yelling at Stryker to "PULL UP! YOU'RE TOO LOW!" it isn't dramatic, it's funny. For me at least, that ruins any of the tension or drama the story naturally builds up.

It's not just the fault of the two stars in Andrews and Hayden. The whole story and execution comes across as ridiculous. The pilot (pro football player Elroy Hirsch) and co-pilot, along with many of the passengers, become deathly ill because they eat contaminated fish as opposed to the regular "meat" option for dinner. Could it happen? Sure, but it sounds nuts. Oh, no, contaminated fish! There's also the screaming hysterical woman who needs to be slapped at the slightest bit of turbulence, the passenger (Jerry Paris) who uses a hand puppet to calm down the Stryker boy, the doctor (Geoffrey Toone) who is freakishly calm and knows everything, and the stalwart stewardess (Peggy King) who is the main culprit reading her cue cards.

Everything almost from the start comes across as half-baked. And a broken marriage being saved because the husband finally faced his fears? Oh, that's sweet. I was very surprised to see the high rating (6.8 as I write this) at IMDB, mostly because I thought it was unintentionally hilarious. It could and probably should have worked as high drama, but instead it produces laughs....lots of them. Good to watch once, mostly to see all the inspirations for the much better and intentionally funny Airplane! It is worth sticking around for Hayden's final line, a classic delivery in the lack of emotion department considering what's just happened.