The Day They Robbed the Bank of England 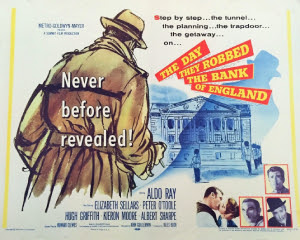 Never a huge star, instead one finding a niche as a character actor and tough guy on-screen, Aldo Ray is one of many gems to come out of the 1950s and 1960s. Most of his roles were supporting parts -- often as part of impressive ensemble casts -- but he did get the occasional leading role, like 1960's The Day They Robbed the Bank of England. Can you figure out what it's about? Yes, puppies.

It's the turn of the century in 1900s London, and the IRA needs money, needs a lot of it and needs it quick to support the movement. In London, O'Shea (Hugh Griffith) and Mrs. Muldoon (Elizabeth Sellars), a widow of a dead IRA gunman, have assembled a small group of thieves and IRA fighters to pull off an impossible job, one that's never been done before. They have hired an American with Irish blood, Norgate (Ray), to lead the job, but where to even start in taking down the seemingly impregnable, heavily guarded bank? Norgate starts by trying to get in from the inside, befriending Capt. Fitch (Peter O'Toole), a young officer working as part of the bank guard. Can Norgate and his team find a way in?

Yes, another heist movie. Sue me, I love these movies. As far as this popular sub-genre goes though, 'Day' is an interesting one that certainly tries to distance itself from the genre conventions. From director John Guillermin, this heist movie starts off on a positive note with a story set in 1910s London, not the present. It sounds simple, but it's deceptively simple in tweaking the story. There are no huge, high-tech security features, just a securely built, heavily guarded vault with no easy way in or out. This is not Ocean's 11. It keeps you guessing though, and Guillermin has some fun with some crazy, exaggerated zooms with the camera, composer Edwin Astley likewise keeping things moving with his score. It is filmed in black and white, keeping things focused on the story and characters, and never tries to be a groundbreaking classic, just a good, old-fashioned impossible robbery.

This is a solid example of a strong part for Aldo Ray in the lead. He doesn't have to do any heavy lifting, instead focusing on being that tough guy -- even a little anti-hero -- who wants to get the job done no matter what obstacles get thrown at him. Norgate's backstory is unfortunately kept under wraps, but some past demons and struggles with the law are hinted at. It's not a flashy part, but Ray is a meat and potatoes kind of guy, and he gets the job done here. This was also just O'Toole's second film role, and even with a poorly written character, the talent is evident. Norgate's team includes Griffin's O'Shea as the bankroll and IRA big-wig, Kieron Moore as fiery Walsh, Joseph Tomelty, Wolf Frees and Albert Sharpe as scene-stealing Tosher, an old drunk who knows a secret that could make the robbery a huge success, affectionately calling Norgate 'Your worship.'

Preventing 'Day' from becoming a classic are a couple flaws that shoot the story in the foot. The early portions of the movie drag a bit as we find that Norgate has a past with Sellars' Mrs. Muldoon who now has a suitor of sorts in Moore's Walsh too. No, it's not a painfully drawn out love triangle -- thankfully -- but the scenes with Norgate trying to win her back are tedious to say the least. Again, there's no real background explained so what should we care? Oh, they used to be together?!? Eh, pass. The other is the utter stupidity in the Fitch character, a disgruntled, bored officer who is so mind-blowingly stupid he doesn't see that Norgate is pilfering him for detailed information about the bank layout. It's a necessary part of the story (how else do they find the dimensions of the vault?), but there wasn't anything better that could have been used?

It is a heist movie, and reflecting the workmanlike nature of its star, the actual robbery is a meat and potatoes kind of job. No big twists or tricks, just a devious plan that has Norgate and his team tunneling into the vault via a shut-down sewer. Meanwhile, O'Toole's Fitch begins to smell a rat in the whole situation. Can he figure it out in time, putting all the pieces together? The last 45 minutes as the heist develops and unravels are not surprisingly the best part, including a memorable ending, Ray doing a ton in his final two scenes without speaking a word. Solid, entertaining heist movie. Definitely worth checking out.