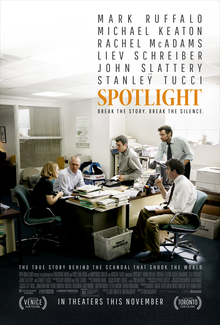 Early in high school, I decided I want to go into journalism, specifically hoping to be a sports reporter/beat writer. I loved sports and still do and currently have a job with the Chicago Tribune as an editor. Even in my eight years since graduating college, I've seen journalism change drastically. God knows where it will go in eight years. Naturally, I was psyched to see 2015's Spotlight, a movie that shows how important journalism is and should continue to be. Oh, and it's a damn good movie.

It's 2001 at the Boston Globe and the Spotlight desk, led by editor Walter 'Robby' Robinson (Michael Keaton) with its three-man staff, focuses on big, deep, investigative stories that sometimes take months and even years to develop into something. The Globe is getting a new editor, Marty Baron (Liev Schreiber), who wants the Spotlight team to investigate an untold story, one that's gone untouched for years with only a story written here and there. He wants the team to explore the story of a Boston priest who was brought up on charges for child molestation and all the gory details. Even as investigative journalists, they've got their work cut out for them, dealing with the Catholic church and victims that don't necessarily want to be interviewed. Even with that said though, Robby and his team have no idea the depths of what they will find as they investigate deeper and deeper.

A quasi-journalist myself, I'm a sucker for all journalism movies from All the President's Men to State of Play to Kill the Messenger and many more in between. I think movies like this are relevant more than ever now in 2016 as newspapers continue their descent into oblivion of sorts. Where will journalism -- especially print journalism -- go from here? Will it survive? Can it? Movies like 'Spotlight' show a need for this sort of investigative reporting, hard-hitting storytelling and dogged journalists who pursue the truth because someone, anyone has to do it. I loved this movie. It's getting all sorts of Oscar buzz, and it will no doubt pull some serious nominations (and hopefully some wins too). It deserves any and all of the buzz it is getting.

Director Tom McCarthy jumps into this film with a refreshing thought. Simply put, he wants to tell a story. There's no explosions, huge twists, pyrotechnics, nudity or violence to speak of. It is a straightforward, elegantly-told story that tells just that, a true story. Much like The Big Short, 'Spotlight' tells a story that is astonishing in its truth, discomforting down to your very toes and unsettling to the point it can be hard to believe you are in fact watching something that actually happened. The story drifts along with the investigation as it gets deeper and darker, the Spotlight team truly understanding the depths and horrors of what goes on with priests in the Catholic church. It's not often you see films like this that are just so perfectly professionally done. It doesn't need a ton of style or an in-your-face mentality. Like its main characters, McCarthy's film simply is looking to find the truth and tell a story.

'Spotlight' is a film that respects its characters and what they do without glorifying them. These reporters want to tell a story, sometimes ones that are incredibly difficult to track and nail down. Some pretty talented actors were picked to bring these real-life reporters to life, including Keaton's Robby, Mark Ruffalo's Mike Rezendes, Rachel McAdams' Sacha Pfeiffer, and Brian d'Arcy James' Matt Carroll. In brief snippets, we get to know about them and their personal lives, nice touches that help us as we go along with the investigation. There isn't a weak performance in the group, and they feel incredibly authentic in bringing them to life. Even when it seems like they've hit a dead-end, they keep looking, keep investigating, even when the truth sounds impossible. Schreiber too is excellent as new editor Marty Baron with John Slattery doing a fine turn as Ben Bradlee Jr., an editor with the Globe who plays an integral part in the clergy cover-up investigation.

But wait...there's more! Because the above-mentioned performances weren't enough, right? I think Stanley Tucci has the ability to walk into a room and steal every scene he's in, an ability he shows off here as a lawyer who wants to do right, who wants to fight for his clients, often the victims and survivors of clergy abuse. Also look for Billy Crudup, Jamey Sheridan, Paul Guilfoyle, an uncredited Richard Jenkins lending his voice to a key role over the phone, and Len Cariou.

Working off the true story, McCarthy tells his story on the ground, in the newsrooms and cramped offices, at the reporters' desks with their desktop computers, phones ringing and notebooks in hand in just about every passing scene. We see them on the phones, pursuing leads, digging through old clips and paperwork, and you get the sense of this is what journalism IS and what it SHOULD BE. It feels authentic. It feels real, and that's why the movie is so criminally straightforward and memorable. 'Spotlight' does not pull any punches. This is the true story of a horrific cover-up that you just shake your head at that something this horrifying could go uncovered, unreported for so long. Will it bring home a bunch of Oscars? Who knows for sure? I know this though. It definitely should.