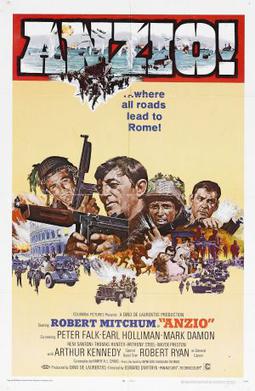 Over the 1950's and 1960's, World War II movies were a dime a dozen hitting theaters. Even with the abundance of movies though, some theaters of war were often ignored, or at least covered less. Case in point? The Italian Campaign as Allied forces took Sicily and then Italy in horrific fighting that claimed thousands and thousands of lives in what some said/say was a waste of manpower. So while 1968's Anzio may not be a good movie, I can't help it. I'm a fan so sue me.

It's early 1944 and the fighting has dragged to a stalemate between Allied and Axis forces along the Monte Cassino line. The Allied forces are planning an invasion in Italy above the fighting as Cassino, intending to land some 70,000 troops north of the fighting at the port of Anzio. Among those landing is a war correspondent, Dick Ennis (Robert Mitchum), who will tag along with an American Ranger battalion (specially-trained infantry) as they hit the beaches. An expected hot landing is anything but...the troops hit the beaches with little to no resistance. There's no German forces for miles. On a patrol into the Italian countryside, Ennis and a corporal from the First Special Service Force, Jack Rabinoff (Peter Falk), discover just how open the countryside is. Back at the Allied beachhead though, no one on the general staff believes them. While the Allies dig in and establish a strong beachhead, the Germans take advantage, assembling a line as deadly as anything the war has seen.

If you're looking for a more detailed description of the Battle of Anzio, check out the Wikipedia page. I'm currently reading Alex Kershaw's The Liberator, an excellent read that explores the fighting in Italy in some detail. What's here in this 1968 war film is a condensed version with some embellishments and names changed. The actual battle of Anzio was a horrific miscalculation on the parts of the Allied commanders who made cautious decisions that ended up costing thousands of lives needlessly in fighting that could have been easily avoided. See? We learned something today!

'Anzio' itself is an interesting mess of a movie. It's from the 1960's, the age of the big, epic war films like The Great Escape, Battle of the Bulge, The Guns of Navarone, a trend that would continue into the 1970's. From director Edward Dmytryk (and Duilio Coletti in whatever the "Italian version" is), 'Anzio' is part of a trend of flicks dubbed Macaroni war movies (instead of spaghetti, get it?!?), films made with mostly Italian backing albeit with smaller budgets. Dino De Laurentiis produced the war film, bringing a respectable budget that's seen in landing shots where landing crafts empty of hundreds of soldiers hitting the beaches. There is a big budget feel (some of the time) as this story develops about one of the most costly battles of WWII. More detail later, but there's also truly odd moments sprinkled throughout, giving Dmytryk's film an off-balanced feel to the proceedings. More later!

Two performances here have always appealed to me, Robert Mitchum as war correspondent Dick Ennis, a character very loosely based on famed writer Ernie Pyle. Interesting tidbit? Mitchum earned an Oscar nomination for his performance in 1945's The Story of G.I. Joe, the story of Ernie Pyle in Italy! Ennis is a frontline guy, always sticking with the troops at the front even when he doesn't have to be. Mitchum treads that fine line between looking worn out and being interested, but that laconic, tired look favors Ennis well. He's sick of war, sick of stupid orders and commands that costs unnecessary lives. A good performance for Mitchum. As for Falk, it is an...interesting performance. His Jack Rabinoff is a SOLDIER. He loves fighting. He's good at it (maybe too good), and his backstory of how he ended up in the First Special Service Force is quite revealing. Again, there's some odd moments, but Falk brings a ton of energy, some humor to the part that's hard not to like.

This quasi-epic war film resorts to more familiar territory in the second half. Following a horrific German ambush, a small group of Rangers, including Ennis and Rabinoff, must get back to their own lines to report what the Allies are about to march into. If it's familiar, so be it. It's more at home. It's more comfortable. Among the survivors, look for Earl Holliman as the capable Sergeant Abe Stimmler, Reni Santoni as Pvt. Movie (always ready with an impression), an underused Mark Damon, Thomas Hunter, Giancarlo Giannini, and Joseph Walsh. In the epic vein, we also get unnecessary cameos from Robert Ryan and Arthur Kennedy with Kennedy at least getting something to do. Ryan is in two scenes, and he only speaks in one! Also look for ever the German, Wolfgang Preiss as Field Marshal Kesselring, the Allies' opposition across the line.

Where 'Anzio' falls in parts is its odd tone and general lack of epic qualities, even though it thinks it is an epic. It is NOT. It's a good, old-fashioned war flick. Simply put, it tries to cover too much ground in 117 minutes. The song that plays over the opening credits, This World is Yours (listen HERE), is awful. Truly out of place. The score itself is hit-and-miss, but when it works, I liked it a lot. As for the tone, this is a story that just refuses to pick one tone and go with it. Is it dark? Is it a light war film? While things are somewhat ironed out (not really), we get a painful scene of Falk's Rabinoff sitting in an ambulance with three prostitutes as he sings "Bye, Bye Blackbird" with them. There's another scene later where he does the same thing. What the hell is going on?!? Don't even get me started about the general combat tactics here either, highly-trained American troops charging into machine gun fire without even raising their weapons or trying to throw a grenade at the nest. Meh, run!!!

Now all that said, I've always liked this movie and held it up on my most recent reviewing. I love the Italian filming locations, especially the shots of Rome. I've always been a big fan of Mitchum and Falk, and even considering some script idiosyncrasies, they're both pretty good here, as is the whole supporting cast. Through all the general craziness and oddness, there's some...oddly charming. The action is harsh, including a late battle between our survivors and four German snipers, and from beginning to end, it is entertaining. It ain't a classic. So be it. It's very entertaining.