My, my, how time flies. I got a job this past April that ate up a whole bunch of my free time so I wasn't able to watch as many movies I have in previous years (or simply as many as I wanted to watch). That said, it was a pretty good year for flicks, especially in theaters where one franchise I love after another had new releases from Fast and Furious to James Bond, Mission: Impossible to Jurassic Park and plenty in between. And lastly, remember, this isn't the BEST or the most critically acclaimed films. I'm a cheaper date than that. It's what entertained me the most. Click on the movie title for the full review. Here we go! (And remember, these are movies I watched between January 1, 2015 through December 31, 2015).

One of the first movies I saw in 2015, I'm still not quite sure what the movie was about or its ultimate message. What do I know? I loved watching this film from director Christopher Nolan. The scale, the scope, the musical score, the immensity of space, the beauty and terror of open space, it all adds up. Matthew McConaughey leads an all-star cast with some surprises along the way. An excellent movie-going experience. 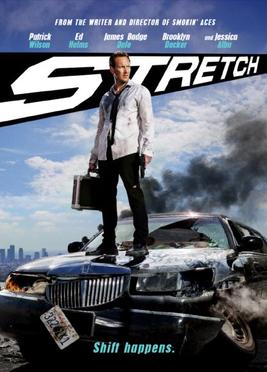 Nothing smooth about the production of this mostly-ignored crime thriller with plenty of laughs. Originally intended as a theatrical release, it ended up on straight to video-on-demand. I loved it. Patrick Wilson plays Stretch, a down-on-his-luck actor turned limo driver and his crazy night on-duty and all the kooky characters he meets along the way. A lot of fun with the underrated Wilson's narration providing some memorable laughs. 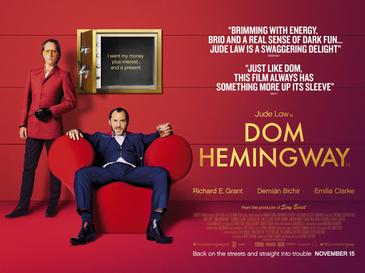 When done right, it's always fun to see celebrities step out of their comfort zone and play some hilariously off-center leading parts. In steps Jude Law as Dom Hemingway, a longtime crook recently released from jail and looking to get paid for keeping some well-guarded secrets to himself. What a crazy, funny, ridiculous, dark, bizarre movie, but much like Stretch, it JUST WORKS. Law is an absolute scene-stealer over and over again in this oddball British crime thriller. 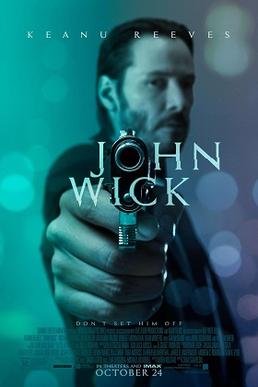 "A hit man comes out of retirement when mobsters kill his dog." What a deceptively dumb plot description...which is only half-true. This is my most pleasant surprise of the year, Keanu Reeves as the titular hit man, who, yes, is avenging his dog but there's so much more going on with his reasoning. Stylish, violent and a really cool cast inhabit a special kind of hitman world. I might have tweaked the ending, but a minor complaint in a bullet-riddled action movie that's a hell of a lot of fun.

I loved Andy Weir's novel 'The Martian' and was appropriately psyched for the Ridley Scott-directed film adaptation. Matt Damon is stranded astronaut Mark Watney, left behind by his crew and feared dead during a sandstorm. Can he survive? Can he hold on for a rescue...if he can somehow get in contact with Earth? Damon is phenomenal as the brilliant Watney, always ready with a sarcastic comment or biting one-liner. The rest of the cast...well, it'd take quite a while to list the cast. Not a weakness in the entire movie. 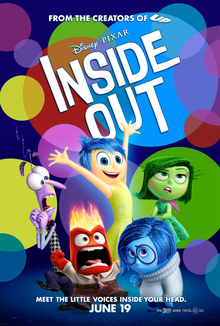 I didn't even try and review this one. My feeble brain couldn't handle it. What a smart, creative, truly inventive movie, the story of Riley, a young girl moving with her parents to a new town and new school. We see her life through her emotions, Joy (Amy Poehler), Fear (Bill Hader), Anger (Lewis Black), Disgust (Mindy Kaling) and Sadness (Phyllis Smith), as they run her life from a control panel in her head. Too many smart, funny moments to even mention. A perfect movie for both kids and adults.

It's been fascinating watching the Mission: Impossible series develop over these last two movies. Like the Fast and Furious movies, they tweaked and rejigged things nicely, turning an espionage series into an action-packed espionage series that pushes the limits of gun battles, stunts, chases, heists and so much more. Tom Cruise returns as heroic, no stopping him agent Ethan Hunt with newcomer Rebecca Ferguson stealing the show as a rival agent who's intentions aren't known. So much freaking fun. 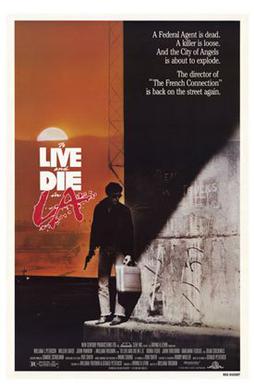 Oh, my. Just "oh, my." The French Connection is a heck of a movie, but this may be William Friedkin's best film. William Petersen is Richard Chance, a no-rules, roguish Treasury agent on the trail of the counterfeiter who murdered his partner. This is a procedural cop drama/thriller on absolute freaking steroids. Dark, cynical, brutal, horrifically stylish, a movie that lingered in my mind for days later. Ssssssssssssoooooooooo good. 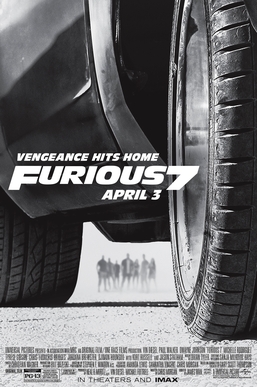 Hi, I'm Tim, and I love these movies. Much like the Mission: Impossible movies, these are movies built around characters we've come to love and action that stretches the limits of any reality but is so absolutely fun you don't even care. Full of action -- car chases and otherwise -- this sequel was a hell of a lot of fun with Vin Diesel leading the way and Jason Statham joining the cast as the villain. Style points? A moving tribute to star Paul Walker who died tragically in a car crash as the movie was being made. I lean toward wrapping up the series on a high note, but there's too much money involved. Curious to see where things go from here, but I'll be there throughout.

Like Inside Out, I debated even writing a review, but I struggled through it. All I could think while watching this franchise reboot from director George Miller was "This is what movie-going experiences should be like more often." Tom Hardy says about 38 words the entire movie as Max, a drifter in a postapocalyptic world, with Charlize Theron as a scene-stealing...well, just see the movie. The simplest of stories here, but let's cut to it; this is a 2-hour chase scene that barely takes a breath, rarely sits back and relaxes for more than a minute or two. This is a movie that stuck with me long after its first viewing. W-O-W. Just wow. What a movie.

So that's it. That's 2015. I watched significantly less movies, but it was quite a year for movies. What movies just missed out on the Top 10? If I did another list, it would include (in no particular order) Whiplash, The Verdict, Avengers: Age of Ultron, Ant-Man, Everest, Chef, Star Wars: The Force Awakens and one of the bigger pleasant surprises of the year, The Man from UNCLE.