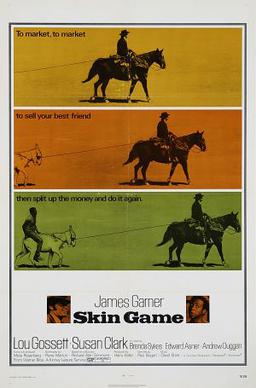 You know what isn't particularly funny? There's no way this introduction isn't in poor taste but...slavery! In recent years, even movies like Django Unchained that were fan favorites and critically loved caused a stir because of its slavery subject matter. So movies like Django, 12 Years a Slave, miniseries like Roots, the subject matter is played straight. That is NOT the case with 1971's Skin Game, a pre-Civil War story with comedy and drama rolled into one.

It's 1857 in Missouri when two men ride into a small town. Quincy (James Garner) is a plantation owner with some money problems, meaning he has to sell one of his slaves, Jason (Lou Gossett Jr.). He gets several hundred dollars for him and they part ways, Quincy onto the next town with Jason waiting to travel with his new owner. Well, that's what you'd think at least, what the supposed-plantation owner and his slave want you to think. In reality, they're con men, going from town-to-town, Quincy "selling" Jason to one plantation/land owner after another and getting out of town while Jason manages to escape in one way or another. The plan has worked well for quite a while now with a hefty bank account waiting for them back in Chicago when they decide they've had enough. Jason, he's had enough as he's the one taking more risk. Quincy, he'd like to travel to a couple more towns and pull off their successful con. What could possibly go wrong?

I've long been aware of this 1971 comedy-drama but never caught up with it. Thank you, Turner Classic Movies! It was worth the wait. From director Paul Bogart -- and an uncredited Gordon Douglas, I imagine there's a good story there -- it takes a touchy, potentially explosive subject matter in slavery and manages to tread the fine line between funny, at-times dramatic and just in poor taste. Come on...slavery. There's just nothing funny in that department. 'Game' doesn't minimize it or make light of it, instead attacking one of the most horrific periods in American history from the side. Considering it that way, it's actually pretty smart. Two con men looking to make some serious cash out of the sale of fellow human beings, now that is creative and certainly unique.

Playing on an oddball variety of a familiar storytelling device, Garner and Gossett have a ton of fun with their odd couple, buddy relationship. We don't learn too much about them, only that they've been con men for several years now piling up the cash with their risky play in each new town. We do learn that Jason was born a free man in New Jersey and chooses to do this, an important detail in my opinion. In a brief, quickly-cut flashback, we also see how the duo met, a fun aside and a necessary one that shows and tells a lot about these two. Sure, there are differences between the two men, but they're cut from the same cloth. The chemistry between Garner and Gossett is not in question with plenty of laughs and some great dialogue flying back and forth throughout the 102-minute running time. A great buddy combo to lead the way.

Also look for Susan Clark in a fun part as Ginger, a fellow con-man...um, con woman who crosses paths with Quincy and Jason at some inopportune moments. Brenda Sykes plays Naomi, a slave who Jason meets and wants to buy her freedom. Ed Asner is perfectly slimy as Plunkett, a slave trader with brutal tactics and no regard for his "merchandise." As for assorted slave and plantation owners, look for Andrew Duggan, Parley Baer, George Tyne, J. Pat O'Malley, and Henry Jones. Also watch for a quick appearance by Royal Dano as violent abolitionist John Brown.

There are some portions in the final act that run a tad sluggish with a story that has some pretty decent surprises. It tends to drift at times, but for the most part, this is an interesting story. I'm mostly recommending it though for the unique, inventive story and the spot-on, perfect chemistry between James Garner and Lou Gossett Jr. This isn't a movie that breaks any new ground, but it deserves more of a reputation than it currently does. Worth a watch for a creative story, unique setting in the pre-Civil War south and a very solid cast. Give it a watch!