The Strange Love of Martha Ivers 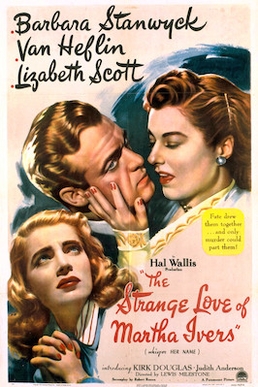 Kirk Douglas is a Hollywood legend. With too many classic films to his name to mention, from Spartacus to Paths of Glory and countless others in between, Douglas is one of the few who deserves that legend status. What's so crazy about his career? He didn't have a climbing period of supporting roles, bit parts and background players. He dove right in, starting with a hugely important part in his screen debut, 1946's The Strange Love of Martha Ivers.

It's 1928 in the up-and-coming town of Iverstown in Pennsylvania when three teenagers from vastly different backgrounds and upbringings are witness to a horrific crime that results in murder. The truth never comes out though, putting the three teenagers on again, vastly different paths into the future. Fast forward to 1946 when the now grown-up Sam Masterson (Van Heflin) drives back into town looking to get his car fixed. He discovers that the other two teenagers have married, with Martha (Barbara Stanwyck) having become one of the most powerful businesswomen in the state with all sorts of public influence. Her husband, Walter (Douglas), is an equally powerful district attorney with political aspirations but really, it's Martha pulling his strings. Now after so many years have passed, the secret that bonds the trio threatens to tear everything down. Martha and Walter are convinced Sam is looking for a payoff. What is his intention exactly?

This is a flick that's hard to peg down. Not quite a romance or a mystery, not quite a thriller or film noir. Instead, director Lewis Milestone's film manages to blend all those elements into one very solid movie. At different points, it is all of those disparate pieces, providing a wave of different tones that might not work together but somehow...they just do. Filmed in black and white, there's a dark, shadowy and sinister look to it all. As well, there's that vein of small-town Americana where everyone has their secrets but no one ever gets called out on them. I will add it is an odd film when you take it all in, but there's something oddly appealing about it, the romance-thriller-mystery-film noir final product.

What holds it all together for me was the characters. We've got four main characters, all of them very human, very flawed and very vulnerable. I don't want to give spoilers away to the opening intro (it runs about 20-25 minutes) but it does involve a murder. If that doesn't provide some pyrotechnics some 17 years later, I don't know what will! Stanwyck, Heflin, Douglas and Lizabeth Scott as a troubled young woman brought into the years-old drama are all on-point in bringing their characters to life, the ensemble working quite well together. They all get their moments to shine and none disappoint. The chemistry between Stanwyck and Heflin is smoldering, as is between Heflin and Scott. In an age of movies that had a tendency to get a little overdone in the acting department, 'Strange' manages to harness all the melodrama and keep it relatively reserved (thankfully!). This is an acting movie, and the actors don't disappoint!

I came away especially impressed with Douglas in his first on-screen appearance and his first-ever film role. His Walter O'Neil is a product of his childhood and later, his marriage to Stanwyck's Martha. As Heflin's Sam points out, he's still a scared-looking little kid. Knowing where Douglas' career would go (and go quickly), it's startling to see him as an alcoholic, sniveling, weakling of a man. What's better? He nails the part. There's a perfect intensity to the proceedings, but he's perfectly believable as a grown man who can basically make a decision for himself. An underrated actor, Heflin delivers one of his best performances as Sam Masterson, a gambler, a WWII vet and with a checkered past to his name who still remains confident that something will come along because...well, because it always has before. Excellent parts for all four leads.

If there's an issue here, it's the pacing. At 116 minutes, 'Strange' can be a tad on the slow side. We spend a lot of time just introducing our characters and laying things out, most of an hour-plus actually. It's only then the wheels go into motion as we start to figure out what everyone's intentions are. What is Sam's plan? Is he interested in blackmail or is he just in the wrong place at the wrong time? What is Scott's Toni's background? Does Martha still have feelings for Sam? A lot to deal with for sure in the closing 45-50 minutes. So that said, I enjoyed the first hour more with its sense of mystery and foreboding doom hanging in the air over this budding industrial town. I was surprised by the ending itself because I just wasn't sure how dark this story would go...but it goes.

An excellent flick all-around, definitely worth checking out.