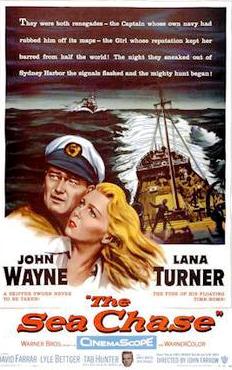 First and foremost, John Wayne was one of the screen's most iconic cowboys. Sure, he took some detours along the way as soldiers, cops and on occasion, as sailors and captains. It can be kinda odd seeing him at see instead of in the saddle, but some of the ventures are pretty good, especially 1955's The Sea Chase. And it's not just the Duke that's interesting, but some generally unique choices in storytelling and tone. And away we go on the high seas!

It's the late 1930's and the German steam freighter Ergenstrasse, commanded by German captain Karl Ehrlich (Wayne), is in port in Sydney, Australia. Ehrlich has fallen from some impressive heights in the German navy because he refuses to support the Nazi party, but he's a supremely capable officer with a solid reputation among fellow sailors. Then the whole world is turned upside down when World War II breaks out, leaving the Ergenstrasse far from home and badly under-supplied. Before they slip out from Sydney though, Ehrlich is visited by the German consul who thrusts a German spy on-board, Elsa Keller (Lana Turner), who has important information and needs to get back to German soil. The British Navy doesn't want to let Ehrlich's ship get through though, setting off a cat-and-mouse across the Pacific and Atlantic of who can out-maneuver the other.

This isn't a movie remembered as one of John Wayne's best, but from the star's weakest decade overall, it's a pretty good entry. It isn't a classic, but I found it damn entertaining, director John Farrow at the helm (shipping/sailing pun intended) of a war thriller that's been generally forgotten. John Wayne as a German captain during WWII? Even if he despises the Nazi party, that's a risky play for a star associated with America and patriotism. 'Chase' was filmed in Australia and Hawaii, its sun-drenched locations giving the thriller one purty look. It isn't flashy, but it certainly gets the job done.

So Wayne as a German captain works surprisingly well. He commits himself to the part in the same way he would a cowboy or a soldier. His Karl Ehrlich is a career man, someone who lives by his word and expects others around him to do the same. Nothing is aggressive or heavy-handed about the background, just that Wayne's Ehrlich has little use for Hitler and the Nazis and is paying for those feelings by being sent to captain the far-off German steamer with no value and no hope of promotion. He knows getting back to Germany will end in trouble for his own future, but it is his duty and he feels compelled to do it, troubling results be damned. He looks comfortable to in the role and compared to some of those 1950's duds -- like The Conqueror or Blood Alley -- it's a classic!

In a long, distinguished career, Wayne wasn't always given too many roles with love interests. Okay, that's not true. Love interests other than Maureen O'Hara. Some reviews seem to disagree with me, but I thought the Duke and the lovely Lana Turner were pretty good together. They've both got somewhat checkered pasts and neither has a future that seems too pleasant, but those two stubborn kids, wouldn't you know that they end up falling for each other a tiny bit? Oh, sorry, SPOILER. A good pairing, the only time these two Hollywood legends worked together. It's a very solid pairing.

If a John Wayne at sea love story isn't your thing, the supporting cast here should pull you in. They're not always given a lot to do in a 117-minute running time, but the character actor star power is ON-POINT here. It's cool just seeing all these fellas together, starting with David Farrar as Napier, Ehrlich's friend and a British officer leading the chase, and Lyle Bettger as Chief Officer Kirchner, a die-hard, loyal follower of the Nazi party who's gonna cause all sorts of problems. As for the Ergenstrasse crew -- and I take a deep breath -- look for Tab Hunter, James Arness, Richard Davalos, Luis Van Rooten, John Qualen, Paul Fix, Alan Hale Jr., Peter Whitney, Claude Akins, John Doucette, and Adam Williams. Not bad, huh? Movie nerds will definitely appreciate that character actor-studded cast.

There are some slower portions during the midsection as Ehrlich and the Ergenstrasse improvises and picks up some supplies at a remote Pacific island. It's necessary though as we get to know the persistently stubborn captain and his beautiful German spy on-board. The international intrigue though picks up, especially when Bettger's Kirchner goes on his own and makes a dangerous command decision that puts the whole crew at risk. There's nothing too flashy from beginning to end, but this is a pretty solid sea thriller, meant to be watched on a rainy Sunday afternoon or late at night with some popcorn. A cool change of pace for the Duke with the beautiful Lana Turner and a fun supporting cast. Definitely worth a watch.