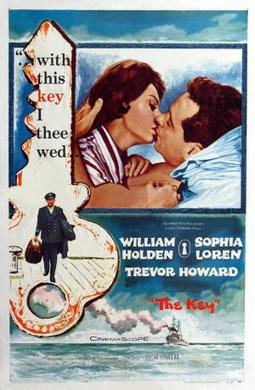 As a movie lover, Turner Classic Movies has been invaluable to me over the years. I've been introduced to movie stars, unknown classics, American, English, French, Japanese and many more types of movies. But every so often, their website cracks me up. Take 1958's The Key for example. The plot description aptly and appropriately stated 'The key to a woman's apartment may hold bad luck for her lovers.' All true, but what did it leave out? That whole WWII backdrop thing....if that means anything.

More than just a World War II setting, this Carol Reed-directed story is a unique, different WWII setting. Little background heading into that ever-important plot description. It isn't on the battlefield or even the home front, but somewhere in between. It is early in the war (1940 and 1941) and the North Atlantic is full of ships, the German U-boats wreaking havoc on Allied shipping. Because of these attacks, many ships are unable to sail to port, often severely damaged and desperately needing assistance. Enter the basically defenseless tug boats who's job it is to bring them in, the U-boats waiting to strike again. And on with that plot thing....

An American who volunteered with the Canadian Army, Capt. David Ross (William Holden) has been reassigned and given a command in the British Navy. He will co-command a tugboat that rescues handicapped Allied ships, a dangerous task considering his boat has one ancient gun and no armor. Ross immediately meets Capt. Chris Ford (Trevor Howard), an old friend and commander of another tugboat in the outfit. They hit it off right away, the old friends reuniting. In passing though, Chris hands Ross a key to his flat, telling him that if anything happens to him, he can move into the apartment. The only issue? A young woman named Stella (Sophia Loren) lives there too. The situation strikes Ross as particularly odd. What isn't Chris telling him, if anything?

From the few Reed movies I've seen -- from his classic The Third Man to lesser known films like The Running Man -- it's easy to see the British director is so highly respected. As a filmmaker, he's a step above most other directors. Anyone can point a camera at the action and call it a day. He goes for more than that, and 'Key' is certainly an example of that. As I mentioned before, the WWII backdrop is an essential part of the story, but the TCM description is spot-on too without even mentioning the war. So in the end, this is a WWII story with a quasi-love triangle (and more) where death hovers above the characters waiting for a chance to strike. It refuses to be pigeon holed at any point, seemingly reveling in its different qualities. Hard to compare to anything else, but it's a movie I very much enjoyed.

SPOILERS STOP READING SPOILERS The "twist" of sorts is that Loren's Stella is apparently some sort of angel of death. Her husband was a tugboat captain but was killed at sea. Her apartment was up for grabs then -- exact details and background are fuzzy -- but another sailor/tugboat captain moved in. He was killed....as was the next one, and then Howard's Ford moves in. Can you see where this is going? Reed plays up this angle for all it's worth. Yes, it is a love story set in WWII England, but it is also much more than that. As I watched, I couldn't help but think this was an extended, feature length episode of The Twilight Zone. That was a compliment by the way. I love that show.

Reed builds up those creepier elements, all the little things coming together to work together perfectly. Much of composer Malcolm Arnold's score sounds exactly like his score from The Bridge on the River Kwai, but then he uses a soft, eerie score that will send shivers up your back in certain scenes. Loren plays Stella almost like an apparition, a ghost. She can sense when her lovers' time is up, asking if she can go to the dock to say goodbye to them. Because of the job of the captains and its inherent risk, death is prevalent, but she knows when it's coming. Reed uses his camera here as a mood-setting, tilting it off to one way or another, aggressively zooming in and out at the action and dialogue. They are just little things that don't drastically affect anything about the story, but at the same time, it is subtle in its effectiveness.

From his spot behind the camera, Reed almost always had impressive casts to work with, and 'Key' is no different. This was Holden at the top of his game, and he doesn't disappoint. It isn't smooth, charming William Holden. This is an underrated acting performance for him. He's scared, angry and upset at the futility of what they do, finding a friend in Chris and possibly more in Stella. Howard plays against type to a point, getting a chance to ham it up a bit. It is a dark part (his "None of us will make it out alive" line speaking volumes), but it is a character that intends to take advantage of whatever time he has left. This is also the first Loren part I've seen that didn't glam her up. She's a beautiful woman, but that's not the focus of the part. She is traumatized, depressed and confused with what the world has thrown at her. Loren does a great job with the part, showing off her dramatic ability when given a chance to be only an actress with eye candy possibility.

Also look for Kieron Moore as Kane, Chris' weary second-in-command, Oskar Homolka as Capt. Van Dam, Ross' fellow commander of the tugboat they share, switching off missions back and forth, Bernard Lee as Commander Wadlow, the officer in charge of his unlikely fleet of tugboats, and Bryan Forbes as Weaver, Ross' second-in-command trying to help out in whatever way he can.

I don't want to give the impression that I liked this movie solely because it was different although that certainly helped. It is a genuinely good story and film, aided by Reed's direction and the acting performances from a very talented cast. Different? Yes, but for all the right reasons.