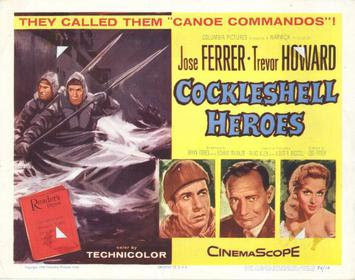 Writing reviews about World War II, I've watched epics about large-scale battles, personal stories about the home front, behind the scenes stories about government/administration, but my favorite has always been the men-on-a-mission sub-genre, commandos, specialists and secret agents working together to pull off an impossible mission. One of my favorites I recently rewatched for the first time in quite awhile is 1955's The Cockleshell Heroes.

Early in 1942 with WWII's outcome still very much in question, Royal Marines Captain Stringer (Jose Ferrer) has been tasked with an improbable mission. German ships operating out of the French city of Bordeaux have been wreaking havoc on Allied shipping, and Stringer must attempt to reach the harbor city with a small group of commandos, destroying as many ships as possible. The catch? They'll be doing it by paddling up the Garonne River in two-man canoes. With help from a career Marine officer, Captain Thompson (Trevor Howard), Stringer goes about training his team of volunteers for a mission that seems suicidal to everyone involved.

From star and director Ferrer (one of 7 films he directed), 'Heroes' is based on the true story of Operation Frankton which took place in December 1942. I watched it as a kid on the History Channel and have always remembered it fondly. Released in 1955, it is more of a heroic look at the bravery these commandos showed on their mission. It doesn't yet have the darkness, cynicism or reality of so many WWII movies released a few years later in the 1960s. There is still an innocence to the story, a "nice" factor. The commandos are the heroes, their Nazi counterparts stereotypically evil. 'Heroes' is only 98 minutes long and was shot on a smaller scale (some cool English locations providing good background) with the focus on this specific mission. There's no sense of a bigger issue or the state of the war. Instead, it's about 8 commandos and the officers leading them. When handled right, who needs a bigger scale than that?

Not a hugely well known movie, 'Heroes' doesn't have the same name recognition in its cast so many other war films have. Ferrer is solid but not particularly memorable as Major Stringer, the unlikely, volunteer commander of the mission. He has several strong dialogue scenes with Howard's Thompson as a rivalry develops about how the mission should be handled, but there's little doubt who the star is. Trevor Howard is a scene-stealer, putting a spin on the stiff upper lip British officer. He's prim and proper and interested in the bottom line -- the success of the mission -- more than how the men feel about him. Thompson is the only character given any real background and Howard does not disappoint. The commandos include Victor Maddern as Sgt. Craig, Thompson's right hand man, as well as the Marine volunteers; Anthony Newley as Clarke, the smart-alec, David Lodge as Ruddock, the strongest of the Marines, Peter Arne as Stevens, the capable Corporal, Percy Herbert, Graham Stewart, John Fabian as Cooney, the Irishman, John Van Eyssen, and Robert Desmond (The Great Escape). Newly, Maddern and Lodge stand out from the group as memorable.

At its heart, this is a men on a mission movie. It just so happens to be based on a true story, the results of the movie mission exaggerated a bit relative to the actual history. Truth or not, 'Heroes' follows a familiar formula. The story is pretty clearly divided in two parts; the training for the mission and then the execution of said-mission. I would have liked some more character background on the commandos, but the training scenes do just enough to differentiate them from each other. There are some original, unique scenes, including Stringer parachuting his commandos into England.....dressed as German soldiers. No money, no identification, they must trek some 300-plus miles back to the base without getting caught. These are some necessary scenes, giving us a rooting interest in these men as they head off to their mission.

Not surprisingly then, the best parts of the movie are the actual mission, dubbed 'Cockleshell,' as Stringer's team is dropped off by a British sub (commanded by Christopher Lee) and must paddle over 70 miles up the Garonne River to their target, ships waiting in the harbor. The final 40 minutes are tense and adrenaline-pumping as they navigate the river. It's here where I started to question. If I didn't know this was in fact a real mission, I'd say it was ridiculous. The bravery exhibited here in insane, commandos in 2-man canoes paddling exposed up a heavily guarded/defended river. HERE is a Google Map showing how far they actually traveled. The ending is downbeat with a sense of success, Howard delivering a very moving final line. Success at what cost though? Listen to some of the main theme HERE, a whistle-worthy score from composer John Addison. The link below is a documentary about the real-life mission. As for the movie, a hidden gem and one I've always enjoyed.