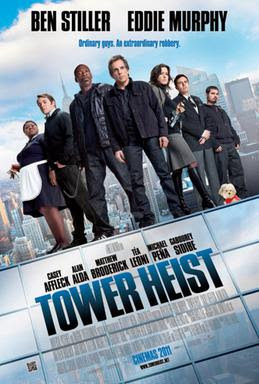 I've written about this before, but I can't help but think of it every movie I watch with Eddie Murphy in it. The comedian/actor built up a huge reputation for himself in the 1980s and has basically spent the last 20-plus years tearing it apart. So when he does something positive and enjoyable, as a viewer we've got to enjoy it! Murphy is a bright spot in a solid, entertaining if unspectacular caper movie, 2011's Tower Heist.

Working as building manager for The Tower -- a swanky, classy NYC apartment for the wealthy -- Josh Kovacs (Ben Stiller) runs a tip-top operation with a helpful, hard-working wait staff. He's shocked to hear some startling news when Wall Street power broker, Penthouse owner in the Tower and all-around nice guy, Arthur Shaw (Alan Alda) is arrested for counts of fraud, wasting millions and maybe billions of his investors' money, including the pensions for all the employees of The Tower. Josh wants to believe the best but finds out otherwise and comes up with a desperate plan. With several other burned employees and a low-level crook, Slide (Murphy), Josh is going to rob Shaw's penthouse apartment and find his hidden stash. Can these amateur crooks pull the job off?

As a fan of heist movies, I'll give just about any one of them a try. The premise reminded me of an ABC show a few years back -- The Knights of Prosperity -- with a ragtag crew of amateur thieves and crooks trying to be master criminals. It isn't a straight physical comedy, and it's not quite a dark, sinister heist movie either. Instead, it falls in between. Yes, it is genuinely funny; Josh's ragtag crew bumbling and fumbling through the planning and robbery. But surprisingly enough, there is a dramatic edge to the heist setting. It isn't played entirely for laughs. There's some actual drama involved, much of that chalked up to the Shaw character being a not so thinly veiled dig at Bernie Madoff. It's easy to feel for Josh and his staff, their pensions/life savings stolen by someone who thought he could get away scot-free with his plan. Comedy and drama working well together.

Playing on the comedic heist angle with a bumbling crew of crooks, I was happy to see the cast here, including some names I wouldn't normally have thought of. Stiller is a great lead as Josh, an everyman worker who busts his butt to do what he does and do it well. He does get some laughs, but he's the straight man, letting those around him get the big laughs. As the conniving, fast-talking Slide, Murphy does provide those bigger laughs, especially his "training" of his crooks and a later explanation of his protocol about the thieving business. Murphy is such a talented comedic actor it's easy to forget that when he's in so many of his recent sub-par efforts. There is an effortless quality to Murphy's talent when he's given good material to work with, and he's got it here. And rounding out the three leads, who better to play a condescending, upper class, know it all a-hole? Yeah, Alda nails his part, his Arthur Shaw a bad guy you just love to hate.

The ensemble behind these three are the real scene-stealers here, including Matthew Broderick, Casey Affleck, Michael Pena, Gabourey Sidibe, and Stephen Henderson as Josh's crew of thieves. Broderick is a highlight as Fitzhugh, a former Wall Street whiz who's fallen on epically rough times as he's evicted from The Tower. The unlikeliest of the crooks, his deadpan, straight delivery kills it in the laugh department. Sidibe too is hysterical as Odessa, the Jamaican maid with a safecracking background. Mostly though as an ensemble, they work well together. Their scenes among the group allow each individual to shine when given the chance. Solid group of dramatic actors all given a chance in the 'Yuck it up' department. Also look for Tea Leoni as FBI agent Denham, assigned to guard Shaw, and Judd Hirsch as Mr. Simon, the bossy on-site manager who keeps pushing and pushing Josh to do this and that.

So what new thing does 'Tower' bring to the heist genre? Like 2010's The Town, it takes a somewhat familiar heist and puts it in an incredibly unique, visually different setting. Where 'Town' went to Fenway Park for its heist, 'Tower' heads to the Macy's Thanksgiving Day Parade. Josh and Co. attempt to rob the apartment while thousands of people line the streets below, the giant floats filling the sky. I can't say why for sure, but it works. Yes, the heist premise has all sorts of holes and premises that just don't work in a ridiculous quality, but it is a fun, exciting extended sequence. The ending though is surprisingly sweet with one character making a huge personal decision.

Nothing flashy or spectacular about this comedy-drama-heist from director Brett Ratner, but it's fun from beginning to end. It benefits greatly from a strong cast -- the major roles and the supporting ones -- and a heist premise just unique enough to set it apart from the rest. Worth a watch.