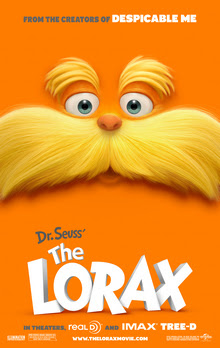 The name Dr. Seuss is synonymous with children's books, and that popularity means it was only a matter of time before those stories were turned into feature films. We've gotten some bad ventures -- The Cat in the Hat, How the Grinch Stole Christmas -- and some inoffensive entries, like Horton Hears a Who. Recently, one of Dr. Seuss' more underrated stories finally got the big screen treatment, 2012's Dr. Seuss' The Lorax.

In the town of Thneedville, nothing is quite how it should be. A complete lack of nature has forced the residents to rely on fake trees, fake grass, and provided air from rich businessman, Mr. O'Hare (Rob Riggle). Trying to impress his crush, Audrey (country singer Taylor Swift), 13-year old Ted (Zac Efron), goes about trying to find a real tree for her. Audrey's an artist -- drawing countless trees, even a mural on her house -- and would like nothing more than to see one in person. Where to even start? Ted seeks out the Once-ler (Ed Helms), a hermit living outside of the town who is responsible for destroying valleys of beautiful trees for his business years before. From the crotchety old man, Ted hears the story of the Lorax (Danny DeVito), a small furry, mustached character who's job is to guard and protect the woods and animals.

The visual look of the Dr. Seuss books makes for an easy transition from the page to the screen. 'Lorax' is big, bright and colorful, best watched while taking some acid. Sorry, disregard that last statement....seriously though, it's a trippy movie to watch. While I like Pixar and its new wave of animated movies, I like the old-school animated movies that are....well, animated. 'Lorax' doesn't look so over-processed by a computer. Unlike so many other recent animated features, it isn't quirky or eccentric, just unique from the start, good for kids with some laughs for the adults too.

I've always been a fan of Danny DeVito, but over recent years, I've come to know him as Frank Reynolds, the foul-mouthed, gun-toting nut of a father on FX's It's Always Sunny in Philadelphia. My first thought when I saw he was playing one of Dr. Seuss' most iconic characters? No freaking way that works....no chance in hell. I was wrong, mostly because I'm so used to 'Sunny.' Playing the Lorax, the small, furry creature with some strong opinions and an epic yellow mustache, DeVito nails the part. His voice is instantly recognizable -- that familiarity ends up working well -- and there's just enough of a dark edge to the character to make it interesting. When Helms' Once-ler disregards his threat, the Lorax and his animal friends steal his bed and let him loose on a gently-flowing (at first) river. That scene provides some of the movie's biggest laughs, DeVito carrying the movie throughout as the iconic Lorax.

The rest of the voice talents are pretty solid across the board, no one a huge, memorable part and no one a train wreck that ruins the movie. The two that stand out the most for all the good reasons are Helms as the Once-ler and Riggle as the evil, diabolical O'Hare. Whether it's on NBC's The Office or his role in The Hangover movies, Helms has a very expressive voice, one that translates well to an animated character, whether it's as a young man or a much, much older guy. Riggle too can fill up the screen with his voice, a funny comparison with O'Hare's visual, a stout, very short man with a bowl cut, his hair cut so he can see out. O'Hare has a great scene late, his verse in a finale song providing some good laughs. Efron and Swift are just fine -- not great, not bad -- as Ted and Audrey. Betty White has some fun as Grammy Norma, Ted's grandma who gives him the idea to seek out the Once-ler in search of the long-gone trees.

Because DeVito and Helms are the more memorable voice talents here, the parts of the story that flow better are the flashback to the history of the Lorax. At 86-minutes, it's not like the movie ever really slows down, but the flashbacks were more entertaining. The visual is there -- especially the unique trees that look like cotton candy palm trees -- and the characters -- the Lorax, Once-ler, the cute animals from a chubby bear to a singing trio of fish -- more appealing. Yes, the movie's 'Save the world' message gets to be a little heavy-handed, and there are a fair share of pretty trippy moments, but it's a fun, entertaining and well-made animated movie. A classic it isn't, but just a good animated movie ain't bad, especially considering the wave of needlessly quirky or repetitive and unnecessary sequels hitting theaters.