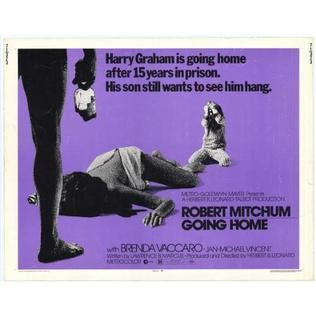 Not bad, and not good but leaning more toward the 'bad department,' I watched 1971's Going Home recently. Never a good sign when it takes three or four sittings to get through a 90-minute movie. So what drew me into this one? That would be the appearance of Robert Mitchum, one of my favorites, in the leading role. Damn you, Mitchum. You win this time....even though it's not your fault this one stinks.

Just six years old, Jimmy Graham sees the aftermath of his father, Harry (Mitchum), killing his mother. When Harry is sent to jail, Jimmy is sent to one foster home and summer camp after another. Thirteen years go by though, and 19-year old Jimmy (Jan-Michael Vincent) wants some answers. He goes to visit his father in prison only to discover he was paroled several months before. He manages to track him down, but where does he even start? How do you restart any sort of a father-son relationship after such a traumatic incident and so many years later? Both Jimmy and Harry are dealing with their own personal demons inside, and a reconciliation won't come easy for either of them.

I'd like to say there was some potential here, but I really can't say for sure. Director Herbert B. Leonard's film is a mess almost from the start. There are times it seems pointed in one direction, and then without warning it does a U-turn, and we're heading elsewhere on a dime. One of my biggest complaints is that it tries to be too 1970s folksy, complete with upbeat, out of place country theme and soundtrack. The story that follows is dark, depressing and even upsetting at times. I don't know what the ultimate goal was. What was Leonard trying to say? Whatever it was, it felt like he came up short or at least missed the point.

A lack of focus in storytelling is one thing, but 'Home' drags its feet basically the entire movie. We're not talking a long movie at all -- just over 90 minutes long -- but we still get repeated scenes of Vincent's Jimmy walking around, running somewhere, moping about his problems. Not one or two, but five and six times. I know it's meant to show his anguish inside, all those years of pent-up frustration, but convincing is one thing. This is just repetitive. It's downright dull. And while I like Jan-Michael Vincent, this isn't a great part for him. Mostly, he just looks pissed off and frowns or pouts. That's part of the frustration of the movie. It's clear he wants some answers from his father, but what are his intentions? Does he actually want to reunite with him, does he just want those answers, or is there an ulterior motive here? Even when the movie ended, it was hard to tell.

There were times when Vincent's character does have his moments, mostly thanks to Mitchum's part pulling him along. Whether as a youngster making his name for himself in the 1940s/1950s or here as an established star, nobody did personal demons better than Mitchum. He knows he made an epically wrong decision years before attacking and ultimately killing his wife, but he's trying to make some sort of amends and move on. His Harry is tortured, seemingly regretting what he did so many years before. In a few key scenes, he carries Vincent along, and their exchanges are both interesting and worthwhile. But most of the time, the script doesn't give him enough to do. Also worth mentioning is a very good supporting part for Brenda Vaccaro as Jenny, Harry's girlfriend caught up in the middle of the situation.

Running out of anything even somewhat worthwhile to criticize/praise here so this is going to be a shorter review. There just isn't much positive here to recommend. If an intention was clearer as to where it wanted to go, at least criticisms could be made on achieving or missing that goal. But that never comes along. The story drifts along, some despicable things are done back and forth, and some 90 minutes later, it's mercifully over. Pass on this forgotten movie.