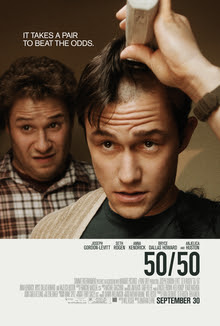 I call it Garden State Syndrome, a little known disease that afflicts certain movies. You know the type. Small-scale, well-written, ultra-personal stories with emo drama and dark comedy of people in their mid 20s adjusting to life and all its little intricacies. Oh, don't forget the indie rock soundtracks. It started with 2004's Garden State, by all means a really good movie but not the end-all, be-all classic some made it out to be. When I saw the preview for 2011's 50/50, that was my first thought. Uh-oh, here we go again, even despite my interest/curiosity. So where did it fall?

A 27-year old living in Seattle, Adam (Joseph Gordon-Levitt) has a pretty cool little life for himself. He has a good job at a Seattle public radio station, lives with his girlfriend, Rachael (Bryce Dallas-Howard), and still gets to hang out with his longtime friend, Kyle (Seth Rogen). Experiencing some back pain though, Adam visits a doctor and gets some startling news. He has a malignant tumor on his back, and his chances are about 50-50 that he'll survive it. His world thrown on its side, Adam tries to fight through his new huge problem, going to a psychiatrist while undergoing chemotherapy. The thought lingers though. No matter what he does or doesn't do, it might not make a difference. He could still die, and he can't control it in the least.

From director Jonathan Levine, '50' avoids most of the trappings of the always dangerous Garden State Syndrome. Yes, there's the indie rock soundtrack (I get it....you're unique), but the overbearing message of how life is so tough to get through isn't an issue at all. Sure, a healthy, normal 27-year old gets a curveball thrown his way, but it never becomes condescending. Adam struggles with his situation -- who wouldn't? -- but '50' never tries to shove sympathy/apathy/emotion in general down your throat. The movie ends up being a huge success because it just does the opposite. It shows the situation as it is -- Adam struggling to adjust, his friends and family trying to help and cope however they can -- without aggressively telling you how to feel about the movie and the developing story.

Like other indie dramadies (that's comedy meets drama) that works so well, '50' does have its moments of brilliance. It goes back to the personal level Levine tells his story from. The humor is of the dark variety, never any obvious laughs which come from the real interactions -- both positive and negative -- between people who care for and love each other. Adam shaving his hair before chemo can do it before him with Kyle's....body hair trimmer?....is an inspired scene, Rogen making that scene with his most likely very natural reaction. Adam's scenes with his fellow chemo patients (Matt Frewer and Philip Baker Hall) are both funny and emotionally tough to watch, three very different individuals bonding through their similar struggle. The most effective is Adam telling his mom, Diane (Anjelica Houston), he has his cancer, a mother acting about how you'd expect. These moments don't feel forced or faked. They end up feeling very real, and the movie's that much better for it.

It seems like a long time since Joseph Gordon-Levitt was a co-star on 90s sitcom Third Rock from the Sun, but here we sit. Gordon-Levitt is fast becoming one of the most talented young actors in Hollywood, and the man's got some versatility. Big blockbuster? Inception. Thriller? The Lookout. Personal drama? Here we are. He's very natural in his characters, and seeing his transformation here as he deals with the different emotional levels of trying to survive cancer can be difficult to watch at times. It certainly helps that we see his friendship with high school buddy, Kyle, played by Rogen. That genuine relationship was what I took away from this movie. They talk, argue, debate and BS each other like long-time friends would. Understandably stunned at his friend's news, Kyle tries to help him out however he can. I loved the dynamic these two had, especially as Adam gets further and further into his chemo therapy. Two talented young actors who help carry the movie.

That's not to forget about the rest of the cast. Houston is a heartbreaker as Diane, Adam's mom. She's caring for her husband (Serge Houde) who has Alzheimer's and doesn't realize Adam is even his son. It's a quick part -- only 3 or 4 scenes -- but a very strong one too. Anna Kendrick is perfectly cute as Katherine, Adam's psychiatrist, a student still working toward her doctorate and thrown into the fire immediately. Dallas-Howard better be careful too. She's very good here, but I wonder if she's being typecast a little bit, considering this part and in Hereafter two years ago. A very talented actress, but hopefully she isn't forced to take similar roles repeatedly. Frewer and Baker Hall as fellow chemo patients Mitch and Alan are especially good too, including one scene late as they join Adam and Kyle for a medicinal marijuana session.

I really liked the whole movie, but I really loved the last half hour. I won't go into details or spoil anything, but it is a very effective ending. The drama and emotion kicks into high gear as we see these very likable, very real people we've gotten to know forced to deal with issues you'd hope you could avoid your whole life. Also, great final scene and final shot, aided by Pearl Jam's Yellow Ledbetter. Excellent movie, one you should definitely check out.