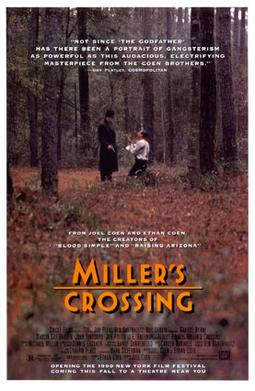 Quirky, darkly funny, extremely violent, all trademarks of the films of the Coen brothers, Joel and Ethan. You basically know what you're getting yourself into when you head into a Coen brothers film. While I've liked all their movies -- some more than others -- I've noticed a recurring trend. The movies? They're entertaining and technically? Pretty much perfect. But they often keep you at arm's length, forcing you to watch a story develop without having a huge interest or personal investment in the characters. Win-lose? That was my first thought on 1990's Miller's Crossing.

It's the Prohibition and in an unnamed city, Irish gangster Leo (Albert Finney) rules with an iron fist, his right-hand man, Tom Reagan (Gabriel Byrne), at his side. Leo's power is hanging in the balance though, Tom seeing that things can change with the snap of a finger. The hard-drinking, gambling Tom is caught in the middle and not helping matters by sleeping with Verna (Marcia Gay Harden), Leo's girl. While Leo tries to hold onto his power, an Italian gangster, Johnny Caspar (Jon Polito), is moving quickly to step into what he hopes will be a power void. Able to think things through easily, Tom concocts a plan to get out cleanly, but with so much on the line, nothing is going to be easy, and it's going to come at a bloody price.

In his 1990 review, Roger Ebert pointed out that 'Crossing' is the best of two worlds; a gangster pic with a film noir setting. At its best, it succeeds because of that. Made on a relatively small budget, it wreaks of authenticity (I mean that in the positive sense by the way) from the 1920s period authentic suits and hats to the classic cars to the weaponry. It feels like we've been dropped into a 1920s city about to be torn apart by a mob war. The look of the movie is incredible, dark colors and backgrounds, shadows everywhere hiding things as needed only to reveal secrets suddenly and shockingly. The heavily Irish-themed score  (listen HERE) from Carter Burwell is hit or miss, but when it works, it really works. I get it. 'Crossing' is a great movie to watch and revel in, enjoying it for all the elements that help make a movie a classic.

Yeah, that's right. Here comes the curveball. Why then do I feel so apathetic to the movie? It was a good movie, but it is missing that special something. The cast -- more on that later -- is immensely talented, the script full of witty banter, surprising, startling violence, and a twisting, turning story that only comes together late. But many reviews I read simply said "You should like this movie if not love it." Not many actually say why so in my head? I'm thinking people like this movie simply because they're told to. Yes, I know there's more to it than that. It's a cold movie, one that I enjoyed but didn't jump into head first. I wasn't particularly interested in any of the characters so as the story threw twists and turns at me, I wasn't surprised, shocked or even that interested. I hear reviewers say "It gets better on repeated viewings." To me, that sounds like a huge cop-out.

Now just because the characters aren't likable doesn't mean the performances aren't worth mentioning. A self-identified 'son of a bitch,' Byrne's Tom is the perfect anti-hero. He's a lead character who is nearly impossible to read, much less completely figure him out. I especially liked the brotherly, even father-son relationship, between Byrne and Finney's Leo. It's the longtime partner and the veteran crime boss, both very talented in their unique fields. Polito is a surprising scene-stealer as Caspar, the Italian (eye-talian according to the Irish) gangster caught up in a developing mob war, and Harden is an out of left field but dead-on pick for Verna, the femme fatale. John Turturro is appropriately slimy as Bernie, Verna's conniving brother, J.E. Freeman as Dane, Caspar's enforcer of sorts, Steve Buscemi as the weaselly Mink, and Mike Starr and Al Mancini as Caspar's on-the-street enforcers. Frances McDormand (the Mrs. Joel Coen) also has a small part as the Mayor's secretary.

Many of the usual Coen brothers touches are there. The violence isn't graphic, but it certainly jumps off the screen. A hit attempt gone wrong on Finney's Leo is a gem, the experienced Irish gangster blazing away with a stolen tommy gun, seemingly never reloading despite firing hundreds of rounds. The sound and visual is indescribable in this extended scene. For the most part, the touches are a little off though. Attempts at that very dark, even sinister, humor felt incredibly out of place and even forced at other times. Other scenes are just plain weird, like Caspar slapping his son for telling him what he had for lunch or a schlub boxer screaming like a little girl while someone else gets beaten. The story is pointed and knows where it wants to go so these outlandish attempts at the dark humor fell short for me.

I'll give credit where it's due though. Emotionally investing? Maybe not, but 'Crossing' is definitely an interesting movie. Many parts felt like the script was trying to tell us something, deliver a profound message. Symbolism is everywhere, leading many fans/viewers to make all sorts of crazy conclusions, many of them oddly related to whether all the male characters were gay. Tom's hat comes to take on a deeper meaning, but what exactly? I can't say I even have the vaguest notion. Maybe this is a movie that would drastically improve with repeat viewings, but while I moderately enjoyed it the first time, I don't see myself revisiting it very soon. I feel like I've been writing this a lot lately, but here it is again. Lots of potential, didn't quite live up to it for me.