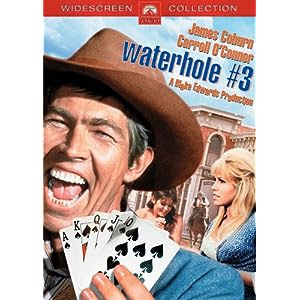 Throw together elements of It's a Mad, Mad World, Mackenna's Gold, and The Great Race and more or less you get 1967's Waterhole # 3. It comes from my not so favorite sub-genre, the comedic western, but that isn't what bothered me the most. Two major flaws trip up this otherwise pretty decent western.

A U.S. Army gold shipment of four gold bars valued at $100,000 is stolen by a gang and buried near a waterhole by their leader, Doc Quinlen (Roy Jenson). Through a run-in that gets violent quickly, gambler Lewton Cole (James Coburn) discovers a map that will lead him to the buried gold, but he's obviously not the only one looking for it. He steals a horse from Sheriff John Copperud (Carroll O'Connor) and heads off into the desert for the gold. Copperud and his daughter, Billee (Margaret Blye), are not far behind, both with their own motivations. Not far behind them? The double-crossed members of the gang and a cavalry troop looking to get its gold shipment back.

As a fan of westerns, I'll give them all a try; epic or small scale, heavy on action or more artsy, deathly serious or straight comedy. Mostly I was intrigued by this one because of the cast despite all the mixed to negative reviews I was reading. Even Netflix didn't think I'd love it, much less like it too much. For a comedic western, it isn't grating like so many other efforts. It is genuinely funny at times. The cast is too talented for it not to be at least funny by accident, even unintentionally. So where does it go wrong? Pick your poison. There's two guesses, one annoying and one somewhat ethically questionable.

Using the term 'ethically questionable' in any review sounds a little off to me, but it's all I can come up. As Coburn's Lewton heads for the gold in the desert, he's caught in the process of stealing O'Connor's horse, meeting Blye's Billee in the process. He forces himself on her, and even though she kisses back because his kiss must be just so magical....it's a rape scene. Lewton rapes Billee. So how to follow it up? Make it a funny rape scene. In a comedic western, I object to a main character raping a woman. Check that, I object to any character doing that, but you get my point. Is that worth being funny over? I don't care if it's a goofy, stupid movie. I felt funny rooting for Coburn's character after that scene. Oh, and he basically does the same thing toward the end of the movie. It hit a sour note with me, her father more interested in the gold, Billee discovering she loves him after being raped, Lewton playing it off like it was nothing. Ah, rape, one of the lighter topics to deal with.

Now in comparison to a comedic rape, my next objection is going to sound stupid and particularly tame. Making this comedic western more folksy and goofy is country singer Roger Miller's song Waterhole #3 (Code of the West) that basically plays over all the action in the 96-minute movie. Nothing like a folk country western song to rev things up! It talks about killing and raping not being so bad, and does a fantastic job of describing everything going on on-screen, what we've seen and what we're about to see. It's like closed captioning on steroids and set to a tune. Trying to show everyone how awful the song is, I of course cannot find a link to it anywhere on the plains of the Internet. Maybe that's a good thing.

The thing preventing me from completely trashing this movie was the cast. That whole rape thing aside, Coburn brings a certain charm to Lewton, a no-account gambler who's able to manipulate and twist anyone around him. O'Connor too gets to ham it up as the not-so-honest Honest John, Sheriff of Integrity, Arizona. The more obvious physical humor aside, I enjoyed Coburn and O'Connor's back and forth more than anything. In a horrifically written character, Blye is nice eye candy as Billee. Claude Akins plays Sgt. Fugger, the inside man on the robbery, with Jenson and Timothy Carey as the imposing but slow Hilb rounding out the gang. Bruce Dern is funny in his one scene as Tippen, the deputy who disappears on a never-seen posse. James Whitmore appears for two scenes as cavalry captain Shipley, while Joan Blondell is funny as Lavinia, the owner of a whorehouse where everything comes crashing down.

Too bad overall, two bad choices crippling this movie's chances. Take the incredibly unfunny rape/revenge storyline out, replace Miller's mind-numbing score, and you've got a pretty decent comedic western. That pains me a little to say. I'm not typically a fan of comedy being thrown in with a western, but Coburn and O'Connor make this at least partially worth watching. They're very good together, very funny, but it's still a mess of a movie.