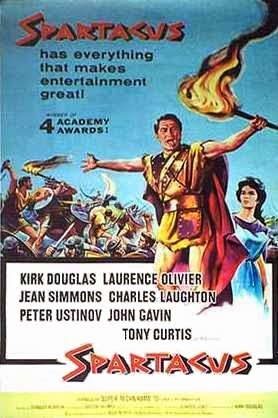 I've been in Spartacus mode for about six months now. This spring I watched the entire run of Starz's Spartacus, I caught up with Howard Fast's novel Spartacus, found a couple non-fiction books about the famous slave turned gladiator at the library and then bought the TV miniseries that aired about 10 years ago. So what is there left? Naturally I tried to save the best for last, catching up recently with one of Hollywood's great historical epics, 1960's Spartacus.

It's the 70s B.C. in Rome when a Thracian slave named Spartacus (Kirk Douglas) is bought from a Libyan mine and sold to a gladiator school in Capua, Italy, several days ride from the city of Rome.  The popularity of gladiators is growing ever stronger, Spartacus thrust into training to become hopefully one of the best. He shows promise but also resents the life, the hatred beginning to grow at Rome's brutal, cruel insistence on slaves and slavery itself. Months into his training, Spartacus incites a brutal takeover, his fellow gladiators joining him in a bloody attack that gives them power and allows them to escape. At first content to be a roving band of marauding bandits, Spartacus organizes his fellow escaped gladiators into an army. They can be more than bandits. They can be an army. An army that with growth and training could challenge Rome itself. His name grows, his army increases with each passing day. In Rome, a powerful Senator and businessman, Marcus Crassus (Laurence Olivier), watches the effect the gladiator slave general has and braces for a reply...if it's not too late.

Wowza, what a good movie, the definition of a historical epic that dominated Hollywood through the 1950s and into the early 1960s. A somewhat checkered production had some issues, a 30-year old Stanley Kubrick replacing Anthony Mann just a week or so into filming. Oddly enough, it is a movie that Kubrick doesn't consider one of his own, not including it in the canon of his films. It is an epic, a smart, well-written, beautifully shot movie with an impressive cast. Composer Alex North turns in a perfect score, large in scale but also very emotional in the quieter moments. I was always a fan of the score, but it really resonated with me on the most recent viewing. There isn't a weakness here, author Howard Fast's novel come to life in truly epic form.

One of the biggest stars working in Hollywood at the time, Kirk Douglas was firmly behind this movie, helping ramrod it right into production and is listed as executive producer. I've always thought this is one of his strongest, if underappreciated, performances. As slave turned gladiator turned general, Douglas is Spartacus. He has several effective so-called "bigger scenes" but the more effective moments are the quiet ones. When he touches the hand of the woman he loves, the rage in his eyes as he's addressed by his superiors, the pride when his army stands up for him, this is an actor doing his absolute best. He brings a real-life character to life, and it's easy to see why so many followed him against Rome. Douglas is charismatic and welcoming from beginning to end. He's furious and full of hate at the Roman system that enlists hundreds of thousands of slaves. Ultimately, he's pushed too far, and his response is something that shakes the world. Just a great performance from a Hollywood legend.

What this flick is able to do so well is to blend so many different moving pieces together. It is an epic with a true ensemble cast, all of the assembled talent given a chance to shine. In one of the best love stories I can think of, Douglas has a great chemistry with Jean Simmons, playing Varinia, a slave from Brittania who becomes Spartacus' wife, friend and confidant. They just work. They're perfect together. There's one of the great actors of all-time, Laurence Olivier, relishing the part of Crassus, a criminally smooth, brilliant manipulator who yearns for power in all forms. There's Tony Curtis in one of his best roles, here as Antoninus, an educated slave who escapes from Olivier's Crassus and joins Spartacus' army. Opposites in most ways, the uneducated leader and the younger, educated fighter become very close, a father-son, brotherly relationship. There's Charles Laughton as Gracchus, the Roman senator with a long, distinguished career behind him, now opposing Crassus, and John Gavin as Caesar, the young and upcoming senator, both giving Rome's perspective as Spartacus' revolt grows and grows. Oh, and there's a scene-stealing Peter Ustinov as Batiatus, the owner of the gladiatoral school that Spartacus escapes from, an Oscar-winning part for Ustinov.

Oh, but there's more. Herbert Lom plays Tigranes, an oily pirate negotiating with Spartacus to get his army out of Italy. As for the gladiators turned army command, look for an underused John Ireland as Crixus with Harold J. Stone and Nick Dennis also standing out from the crowd with smaller supporting parts. One of three performances in 1960 that helped make him more than a physical presence, Woody Strode plays Draba, an experienced gladiator worn down by the constant killing in the arena. A small part but a key one to propel the story forward. And last but not least, gravelly-voiced Charles McGraw as Marcellus, the brutal gladiator instructor, a man tasked with turning slaves into killing machines intended for the gladiator ring. Strength from top to bottom, not a weak link in one of the great casts ever put together.

This is a thinking man's epic, not a true sword and sandal epic. The script from blacklisted author/writer Dalton Trumbo is a gem, giving a window into the politics of the time. The story moves amongst the ensemble from the gladiator school in Capua, to the streets and halls of the Roman Senate, to Spartacus' base at Mount Vesuvius to his camps moving across Italy. Trumbo's script is an idea-script, one about freedom and corruption, living life to its fullest even if the means seem impossible. We see the inner-workings of the Roman senate, of Spartacus' inner circle. You get a feeling of what the times were like in ancient Rome. Just a beautifully written script, Douglas saying "Screw it" to the blacklist that prevented Trumbo from writing for years.

'Spartacus' has moments both big and small here, both working seamlessly. The arena fight between Spartacus and Draba is a gem. Not drawn out but incredibly intense, including a great twist near its conclusion. The revolt in the school is quick and hard-hitting, the tension finally boiling to an unbearable point. As the rebellion grows -- the real-life history was called the Third Servile War -- Spartacus realizes the fight can be as big as his army wants it to be. The entire movie is a treat to watch, but I've always found the second half the film's strongest, especially when the tide turns against the slave army. Maybe the most iconic scene, "I'm Spartacus!," has become a punchline in pop culture, but in context, it is one of the most beautifully constructed, emotionally perfect scenes ever, the camera lingering on Douglas as an ideal conclusion. Watch it HERE with obvious spoilers. The same for a late scene between Spartacus and Antoninus discussing the impact of what they've done, Spartacus willing to Crassus "He'll come back and he'll be millions." Too many great moments to mention.

This isn't an action-heavy movie so beware going in if you're expecting 3 hours of battle scenes. Supposedly more battle scenes were filmed but never used, all in hopes of making the one major battle late in the film far more effective. It is, but this is not a movie interested in the scope and scale of battle. This is a story about the people. We see scenes with literally thousands of extras, but the camera zooms in on the faces, people we see popping up throughout the second half of the movie. Old and young, mothers and fathers, teenagers, kids, thin and fat. The moment where Spartacus walks through his camp on the eve of battle is perfect, the former slave truly realizing the scope of what his army has accomplished. The post-battle scene is that much more gut-wrenching as is the finale itself.

Just a classic. Enjoy it.