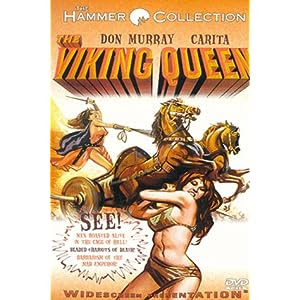 In the 1960s, the unofficial age of the epics, not all studios were able to produce immensely scaled historical dramas with A-list stars and a cast of thousands. Some, like Hammer Films, did their best to counter on significantly smaller budgets. More violence, more nudity, less message and spectacle, like 1967's oddly named The Viking Queen.

With her father the Briton king on his deathbed, young Briton woman Salina (Finnish actress/model Carita) is given power of the empire and is told to rule with a fair and just hand. Her selection divides the people, but she does her best to make a decision that is best for her people. Part of her father's deal was a controversial deal of co-rule with the Roman rulers, led by governor general Justinian (Don Murray). Very few among the Britons, Druids and Romans seem willing to go along with the plan, but when they fall deeply in love, both Salina and Justinian do everything they can to make the new system of rule work. With so much power at stake, all sides begin to conspire.

From Hammer Film Productions, this is a somewhat interesting if not necessarily good movie. Obviously made on a significantly smaller budget than the Hollywood epics of the time, 'Queen' has a certain low-budget charm. Much of the budget seems to have been spent on costuming and set design, leaving all those other things left by the wayside. So instead of a big sweeping story, we get lots of curvy, scantily clad women and....yeah, that's about it. Basically every scene a woman is on-screen, she's topless but strategically covered by hair, wearing a low-cut top that reveals -- as Peter Griffin would say -- 'side boob,' or just forced to wear a top and push-up bra that looks like she's being choked. Who needs spectacle when you've got that?

The Romeo and Juliet angle is played out about as you would expect it. Definitely the feeling of been there and seen and done that. It certainly doesn't help that Murray is rather wooden as Roman general Justinian although he does sport a Roman-looking haircut that's pretty ridiculous. Finnish model Carita (in one of 2 career film roles) just isn't an actress although her performance is far from the worst thing here. She's acceptable if somewhat stiff. Mostly her part is what I mentioned earlier; eye candy and lots of it. In that department, she's perfect casting, like THIS scene where's she "topless" and whipped. But putting the two actors together, Murray and Carita just don't have much in the way of chemistry. With a story that focuses on that Romeo and Juliet angle, even a little chemistry would have gone a long way.

Thankfully the rest of the cast with lots of familiar faces is having some fun with the cliched story. Donald Houston hams it up like nobody's business as Maelgan, a Druid high priest who rants and raves at anyone who will listen about the coming war that will have the land running with blood. Andrew Keir is a bright spot as Octavian, Justinian's second in command who resents the fact that he's been passed over for promotion, Percy Herbert playing his also treacherous Roman right hand man. Patrick Troughton too is a positive as Tristram, Salina's trusted adviser, who must also look out for his wavering son, Fergus (Sean Caffrey). Adrienne Corri and Nicola Pagett round out the eye candy contingent as Salina's sisters.

Now if you're in the Ass-Kicking Female Characters Dept., stick around for the end, a battle royale between Salina's Britons and Justinian's Roman legion. Salina and her two sisters -- going for the sexy look rather than battle appropriate -- ride their chariots into the Roman ranks. Like I've mentioned, no huge scale, but a solid, well put together battle sequence. A quick downer ending too which came as a bit of a surprise. And also, what the hell is with the title? Salina isn't a Viking, and there's no freaking Vikings anywhere in the story! Pretty mindless "historical epic" mostly worthwhile for the babe quotient. That's all I got. Eye candy here.