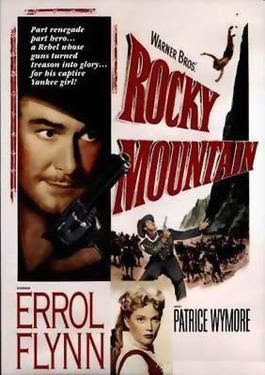 As far as the American Civil War, there just haven't been much in the way of movies about the topic. Sure, there's been epics -- Gettysburg, Glory, Cold Mountain -- but overall as a sub-genre, there's been less compared to almost any other war America was involved in. I don't know that for sure, I'm just assuming. Westerns set during the time though have their own little niche, especially when Union and Confederate forces must band together and fight, like 1950's Rocky Mountain.

Leading a small seven-man squad west for a secret mission that could save the Confederacy, Capt. Lafe Barstow (Errol Flynn) has his mind set on the mission and that alone. Their plan? Start an uprising in California, hoping to take attention -- and troops -- away from fighting in the east. His plan takes a hit though when Barstow's squad fights off a Shoshone attack and rescues a beautiful young woman, Johanna (Patrice Wymore) from a wrecked stagecoach. On their way to meet the hopeful leader of the uprising, Cole Smith (Howard Petrie), Barstow must not make a decision. Johanna's fiance is a Union officer and will no doubt come looking for her. His squad is stuck in the middle, forced to continue the mission or save Johanna, worrying about Shoshone war parties and Union patrols all around them.

Forgetting to record this when it recently aired on TCM, I was pleasantly surprised to find it available for viewing at Netflix. I was even more pleasantly surprised after watching it. The late 1940s and early 1950s were an important transition for westerns. It wasn't so much the white-hatted good guys vs. the black-hatted bad guys. Most characters had flaws, even inner demons they had to deal with. From director William Keighley, 'Rocky' isn't quite there....but it's getting there. The Union and Confederacy teaming up was used several times after (Escape from Fort Bravo, Major Dundee), but this is one of the first I can come up with. It's the little things here. The men have beards, stubble, and look like they've been sweating in the desert heat. At least some effort was made to make it seem authentic. I give points just for the attempt. When that attempt works? Win-win for the viewer.

A couple more 'little things' here that help make 'Rocky' a little more memorable. Keighley filmed his western in black and white, pretty typical for the time in a western. Would it have been an interesting movie to watch in color? Yeah, you bet, 1948's She Wore a Yellow Ribbon coming to mind. But the rocky, barren desert is aided by the black and white filming, giving a starkness to the setting that color might have canceled out. He films on location in New Mexico, using some familiar locations including some that fans of John Ford's Fort Apache will notice (more on that later). Also, 'Rocky' borrows an instantly recognizable musical score from composer Max Steiner, using his They Died With Their Boots On theme. Give it a listen HERE starting at a :49.

His star fading a bit by 1950, Errol Flynn nonetheless makes the most of his last western. He just looks comfortable in the part. His Capt. Barstow is a strong leader, liked and respected by his men, but he also has a moral compass that won't let him turn his back on what's right and wrong. The only slow moments here are his not-so-surprising romance with Wymore's Johanna. She's engaged to Union cavalry officer, Lt. Rickey (Scott Forbes), but can't help be drawn to the very attractive Capt. Barstow. Playing the sneaky, sniveling Cole Smith, Petrie is a background player, but his character plays a key role late. Also look for western vet and character actor Chubby Johnson as Craigie, the stagecoach driver with no allegiances to North or South, just himself, bringing some homespun charm to this small but funny part.

What drew me to the movie -- right up there with Errol Flynn -- was the story that sounded like such an obvious forerunner to movies like Escape from Fort Bravo and Major Dundee. Nowhere was that more evident than Flynn's small squad of Confederate misfits. Not any huge names here, but western fans will no doubt get a kick out of watching the group. It includes Guinn Williams as Pap, the old man of the group, Dickie Jones as Jimmy, the soft-spoken youngster who fights like mad while also looking out for his mutt of a dog, Slim Pickens (in his first credited role) as Plank, a plainsman who served time in prison, Robert Henry as Kip, a young man and heir to a plantation back home, Sheb Wooley as Rawlins, the steamboat man with a mean streak, Peter Coe as Pierre, the Frenchman from Louisiana, and Rush Williams as Jonas, the plainsman and dead shot with a rifle. Not a weak link in the bunch, but Jones especially stands out, including one scene he has with Wymore discussing his brief encounter with Robert E. Lee before Gettysburg. Just seven solid supporting parts for Flynn.

It's the rare western I can't find something positive to talk about. And about an hour into 'Rocky' I was liking it a lot if not loving it. And then there's the last 25 minutes. I have this picture of 1940s and 1950s movies typically ending rather happily; guy gets the girl, everyone makes it. That certainly ain't the case here. Somewhat short on action to this point -- not an issue in the least -- the finale has Flynn's Barstow and his squad making a dangerous decision separate from the mission. I won't give spoilers away, but I was shocked by this ending in its brutal honesty. It was also filmed in the same canyon as the massacre in Fort Apache. Flynn addressing his men says after a chase "They've seen our backs....let's show them our fronts." It's a line that could sound cheesy, but in a western in this situation with Flynn delivering it, it works in a big way. I loved the honesty of the ending. LOVED it. It takes a pretty good western and makes it a near classic instead.