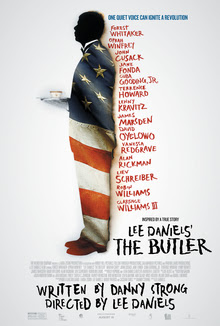 The names of the U.S. Presidents are instantly recognizable, names synonymous with the history of the United States, especially that building where the president leaves, whatever it's called. The White House I think? What about all the people who work at the White House, who keep the place running? And no, it's not just the nameless/faceless individuals who get killed during terrorist attacks in movies like White House Down and Olympus Has Fallen. I kid of course as we jump into 2013's Lee Daniels' The Butler, the true story of one of the White House's longtime butlers.

Growing up as a young boy with his sharecropping family in 1926 Georgia, Cecil Gaines has his outlook on life forever impacted when his father is shot down by a white man, the land owner where the family work, after raping his mother. Cecil is taught to be a house worker, a butler, and grows up finding jobs here and there working as a butler for the rich and well-to-do, eventually ending up at a Washington D.C. hotel. It isn't long before a grown-up Cecil (Forest Whitaker) has created quite a reputation for himself, earning an interview and eventually a full-time job at the White House, working with the sizable staff to make sure the President's home is a crisp, clean operation on a day-to-day basis. It's the late 1950s though, America heading into a turbulent time in its young history. Cecil has an inside look at America's involvement at home and internationally, all the while trying to raise a family with his wife, Gloria (Oprah Winfrey).

This wasn't a movie I was dying to see, but I was nonetheless curious, even intrigued to see it. Loosely based on the true story of Eugene Allen, 'Butler' is director Lee Daniels' second film since his 2009 movie, Precious, that really put him on the map. It received pretty solid reviews and was a surprise success in theaters, earning over $167 million. I'm not really sure what to take away from it overall. I can appreciate what the message is going for, what it's trying to stand for and say about American history, yet that said, I didn't especially like it. What it's trying to do is admirable. What it accomplishes? Still mulling that over. Some of that can be chalked up to the script which tries to accomplish a ton in a 132-minute movie.

What I didn't question was Forest Whitaker in the lead role. Playing Cecil Gaines, Whitaker is our window as an audience into a whole lot of American history. We see his mindset, his frustrations, his motivations, his friendships, his rivalries, all of it. It isn't a flashy part, far from it, just a very straightforward, effective part. Whitaker's Cecil is a family man who wants to provide for that family, especially his wife, Gloria, struggling with alcoholism as she misses Cecil, his oldest son, Lewis (David Oyelowo, a good performance with some odd moments as a 37-year old playing a 15-year old), who dives headfirst into the civil rights movement, and his youngest son, Charlie (Elijah Kelley). His narration as a lead characters gets to be a little heavy-handed at times, but that's the script and not on Whitaker's shoulders. A very solid performance for Whitaker, a man trying to get by and live in some extremely turbulent times.

Beyond the family though, the supporting cast is mostly a long list of historical characters and bit parts that aren't around long enough to resonate. We meet a handful of Presidents including Dwight Eisenhower (Robin Williams), John F. Kennedy (James Marsden), Lyndon B. Johnson (Liev Schreiber), Richard Nixon (John Cusack) and Ronald Reagan (Alan Rickman), even meeting Nancy Reagan (Jane Fonda). These little episodes are pretty cool, but they're also gone as quick as they started. Because of that pacing issue, these scenes, appearances and story developments aren't as effective as they could and should have been. In storytelling technique, 'Butler' reminded me of the classic Forrest Gump, bouncing around to a lot of stories, a lot of key moments in American history, the story giving us a window into those moments. Where Forrest Gump blended the humor and drama though, 'Butler' stays on the dramatic path, and it wore on me. This can be a heavy, dark movie to get through at times.

Give the movie credit. It tries to do a lot. Ultimately though, I felt like it tries to do too much. A story focusing on Cecil's 30-plus year career at the White House would have been fascinating in itself. The same for a man trying to care for his family through the turbulence of the Civil Rights movement, into Vietnam and beyond. Doing both ends up making things too bouncy to the point neither story gets the attention it deserves. Much time is spent with Oyelowo's efforts in the Civil Rights movement, Cecil and Gloria worried and angry back home. Moments that feel like they should resonate well and carry the movie feel rushed, not letting those moments breathe. Much like the recent The Monuments Men, this feels like a story that would have been better suited to a miniseries. The effort is admirable, the execution tolerable. Moments like Cecil interacting with his fellow butlers (Cuba Gooding Jr. and Lenny Kravitz) ended up resonating more with me than most of the far-more dramatic scenes. Also look for Terrence Howard , Mariah Carey, Alex Pettyfer, Vanessa Redgrave in odd, out of place parts.

That's the biggest issue. It doesn't pick a route and stick with it. Moments that work among portions of story that drift too much, kinda a necessity with a story that covers six decades in a man's life. I also resented something from the final scene, a written, on-screen message thanking all the men and women that have helped gain "our freedom." As a white individual, this message hit me the wrong way, and I admit I may be over-analyzing. Is this a movie meant solely for an African-American audience? Should I not be watching this movie? It's a mixed bag in the end, a generally interesting movie that ultimately doesn't live up to its potential.