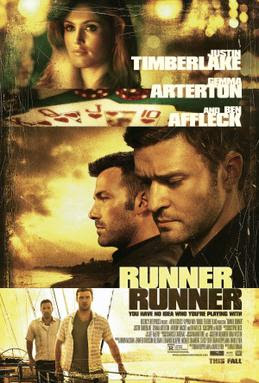 If you would have told me back in the late 1990s, that some 14 years later Justin Timberlake would be where he is right now..........yeah, I would have said you were nuts. The 'N Sync front guy?!? Really?!? But here we sit, Timberlake one of the biggest stars in entertainment in music, film, even on TV pairing with his buddy Jimmy Fallon. Good for him, the star doing quite the job of marketing himself. And then there's 2013 Runner Runner, setting him back in a bad way.

A graduate student at Princeton, Richie Furst (Timberlake) has fallen on some tough times. A former Wall Street broker, Richie lost his six-figure job and is now struggling to even pay his tuition. As a way of earning some money, he sends gamblers to an online gambling site, earning a commission, but as a last ditch effort, Richie gambles too at the site, losing his entire upcoming tuition payment. Running a study through a friend's software, Richie proves he was cheated. His solution? He travels to Costa Rica (where he got that money is never addressed) looking to confront the company's controversial owner, Ivan Block (Ben Affleck), who operates free of U.S. jurisdiction with his possibly corrupt business. When he somehow manages to finagle a meeting, Richie is stunned at the response he gets. Ivan offers him reimbursement and more, he wants Richie to work with him as a right-hand man. It seems too good to be true, huh?

From the explosion of Texas Hold 'Em's popularity to the "Video Poker" signs that pop up seemingly everywhere, that whole gambling thing sure seems to have taken off over the last 10-15 years. Right up there in the popularity department is the insane popularity and growth of online gambling, giving gamblers a chance to gamble from their couch. To say online gambling is worthy of a huge, all-reaching story isn't exactly spot-on, but it's certainly an interesting premise. This is not that movie. Released in the U.S. in October 2013, it bombed in theaters, raking in countless negative reviews, and let me tell you it is just not good. Director Brad Furman's flick is currently rocking a 9% at Rotten Tomatoes and is barely hovering over the 5.0 mark at IMDB. I'm surprised it is even that high.

The biggest issue here concerning the criticism is that there's not one high-arcing reason for why 'Runner' is so bad. Maybe that's the biggest reason in itself? It is dull, has no energy, seems borrowed from one like-minded movie after another and never creates its own identity. At 91 minutes, it is painfully slow, trying to do a whole lot but not achieving any of its goals (if you ask me) and limps to the finish line in a painfully contrived finale. This is a movie that's dead on arrival. The biggest thing I can say is this. There's no real reason to watch it. This is a movie that's just sorta.....there. I didn't hate it with a passion, didn't revel in its badness. It just sits there, and if you ask me, that's one of the worst things you can say about a movie.

As for that Timberlake fellow, he's got that potential, that thing that makes people stars. He's hilarious on his SNL hosting gigs, has shown he can handle supporting dramatic parts in movies like The Social Network, could do well in a rom-com like Friends With Benefits. What's missing? Dark, heavy dramatic parts that require him to be a tough guy. I don't know if Timberlake is cut out for that part, struggling here the same way he did in About Time. Is it his demeanor? His kinda slight physical stature? That not so deep voice? Maybe it's all of them, maybe it's none of them. In 'Runner,' his Richie character is the worst kind of lead, cocky but not likable. His voiceover narration has him talking in this raspy growl -- seemingly to "toughen" up the part -- but it feels forced and comes across as unintentionally funny, not high, exciting drama. Timberlake has a future in acting, no doubt about it, but I think it's more in the comedy vein. He's still looking for that great action/drama role.

Playing the more fun part, Affleck is probably the best thing going here. His Ivan is friendly, charming, disarming and conniving like a crazy person to save his own backside. Still, the script from Brian Koppelman and David Levien is too rushed, not spending enough time with the Block character. We never get a good read on him, especially when things take a turn for the worse for everyone involved. Gemma Arterton is wasted as the necessary pretty girl who likes the new guy but has a past with the established guy. It's a part that gives her nothing to do other than flirt and wear nice dresses. Another talented actor who has picked some odd roles, Anthony Mackie overacts like his life depends on it as Agent Shaver, the FBI agent investigating Block. Also look for John Heard as Richie's gambling addict father and Michael Esper and Oliver Cooper as Richie's two friends who also get involved with Block's company.

What a blah flick. When things are supposed to be speeding up toward the finale, 'Runner' limps to the finish. The scenes with the final twists and confrontations are awful, Mackie's supposedly competent FBI agent making one horrifically dumb decision after another. This is just a dumb, boring movie. Highly recommended! Kidding. Totally kidding.