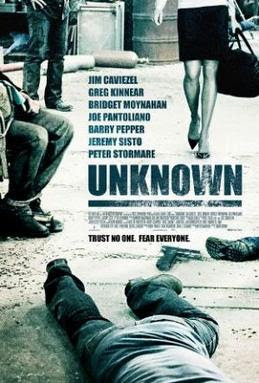 Airing for five seasons on CBS between 1959 and 1964, The Twilight Zone helped rewrite the science fiction and thriller genre, especially for television. There weren't too many weak episodes, but the best ones presented these mysterious situations with no explanation provided. How did we get here? Who am I? Where am I? They were these great little stories, wrapped up nicely in 30-minute episodes. Watching 2006's Unknown, all I could think of was that the Twilight Zone was a big inspiration.

A man (Jim Caviezel) wakes up in an odd, vacant warehouse with no idea who he is and absolutely no recollection of how he got there. The situation is about to get a lot weirder. He's not alone, with several other men unconscious in the same warehouse. One man (Joe Pantoliano) is tied up to a chair, another (Jeremy Sisto) is handcuffed and hanging from a bar overhead, a third (Greg Kinnear) lies face-down in a pool of blood, and a fourth (Barry Pepper) is quickly regaining consciousness. Trying to piece it all together, the first man answers the phone, a voice (Peter Stormare) at the other end, asking a couple questions and then telling him "We'll be back soon." With no answers, no clues as to what's going on, the first man realizes the rest of the men are waking up. All they know is they're trapped in a warehouse with no exits in the middle of the desert. Who put them there? Were some of them involved? All they know is they could be in trouble if they don't find a way out immediately.

What a perfectly straightforward, highly enjoyable flick from director Simon Brand and screenwriter Matthew Waynee. Mystery, countless unanswered questions, and a whole bunch of confused, angry men in a hellish situation. Sometimes the most straightforward, simple premise works this best. I don't remember this thriller getting a release in theaters in 2006, but I liked it a lot from the get-go. Just like the men in this isolated warehouse, as an audience we have no idea what's going on. NONE. There really isn't a weak point in the story, but 'Unknown' hits the ground running. The high points are the opening, five knocked-out men waking up in a warehouse and freaking out (rightfully so). They panic, scream, yell, argue and then settle in, knowing their time is running out if they want to get out unscathed. I like movies like this that capitalize on a gimmick and do it well. If you're gonna use a gimmick, do it right.

More than the story, I was drawn to this movie because of the cast. These aren't huge names, but that's a good thing. These are some of the more talented actors working in Hollywood, working together to form a great ensemble cast. We kinda sorta learn some of their names, but in the cast listing they're identified by some distinguishing feature, Caviezel is Jean Jacket, Pantoliano is Bound Man, Pepper is Ranch Shirt, Kinnear is Broken Nose, Stormare is Snakeskin Boots and Sisto is Handcuffed Man. The performances are uniformly good, Caviezel, Kinnear and Pepper getting the most of the screentime. The group does a strong job showing the various reactions, Caviezel curious and questioning himself, Kinnear absolutely flipping out, Pepper the middle ground trying to weight all their options. We see the dynamics -- individually and as a group -- as everyone involved must decide which people to side with. Should they side with anyone? These folks are in a life and death situation. That's it. That's all.

That group dominates the screentime, but there are some key supporting parts. Bridget Moynahan plays a worried woman trying to get one of the men out, a small but key part. Chris Mulkey and Clayne Crawford are two police detectives on the hunt, looking to follow the clues as presented, looking for someone in the warehouse. Mark Boone Junior plays an associate working with Snakeskin Boots.

With a story like this, it would be really easy to give away some major spoilers. But what's the fun in that?!? I want you to enjoy the movie like I did, going in blind and trying to piece it all together, see if you can figure it out before the twists are revealed. The amnesia storytelling device can be a make or break gimmick, but it doesn't feel forced here. A bottled chemical is released, knocking these five men out for over a day to the point they remember nothing about who they are or how they got there. After waking up, they slowly begin to figure things out, to remember all those touches and snippets of their lives. We see these portions in blurry, hyper-edited flashbacks, everything falling into place. My usual worry is that the premise in innovative stories like this is far better than the twist, the payoff. It comes as disappointing when the reveal is made. Not the worry here. The script, the story, the twist, it all works and does so really well.

The only disappointing part of this quick 85-minute long movie is in the finale. Far from a dealbreaker, but the potential for some giant twists (giant good twists) is there. The ending is good but it could have been great. There's also a surprising, secondary twist revealed in the last two minutes that felt unnecessary, everything kinda hanging in the balance when the credits start to roll. Still, these are minor issues with a thriller that I loved watching. Uncomfortable and mysterious, adrenaline-pumping right until the end, this 2006 film is a gem.